Sushi Striker: The Way of the Sushido is a new action adventure RPG puzzle game from Indieszero, the people behind the wonderfully rhythmic Final Fantasy Theatrhythm games and the delightfully addictive collections of reworked 8-bit classics in the NES Remix. Originally announced for the 3DS, Nintendo later confirmed that it would be coming to the Switch. 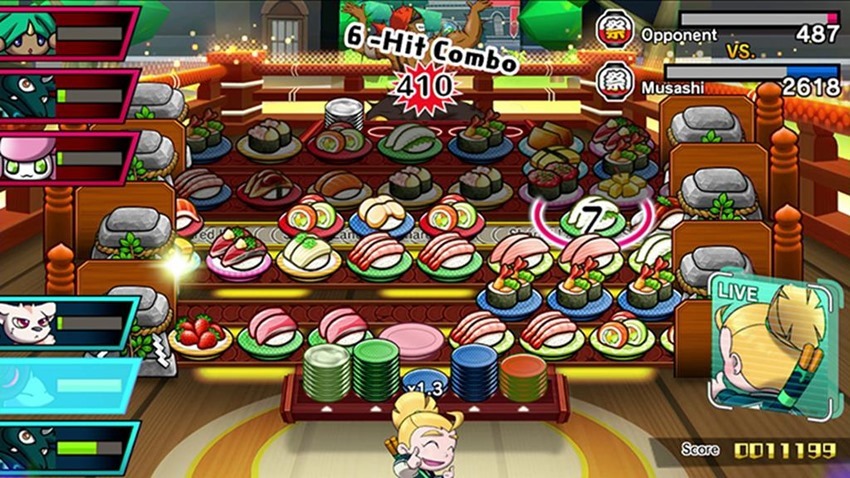 Its premise is frankly absurd. In a world without fish where sushi is verboten, a young orphan called Musashi gets a taste for the forbidden fruits de mer. Here sushi isn’t just food – it’s mythical and otherworldly, a most precious resource and the cause of a long war known as the Sushi Struggles. After the war ended with the republic falling to the might of the Empire, even mentioning the delicacy is a crime. Eating it, is an even greater sin.

Enraptured by the taste, he (or she, depending on your choice) joins the Sushi Liberation Front to free the world of the tyrannical oppression of the sushi-coveting Empire and deliver the delicacy to all and sundry. Aiding him are the Sushi Sprites; little furry creatures who have a deep spiritual connection with sushi and can conjure the prohibited piscine pleasure, plucking it from nothing. 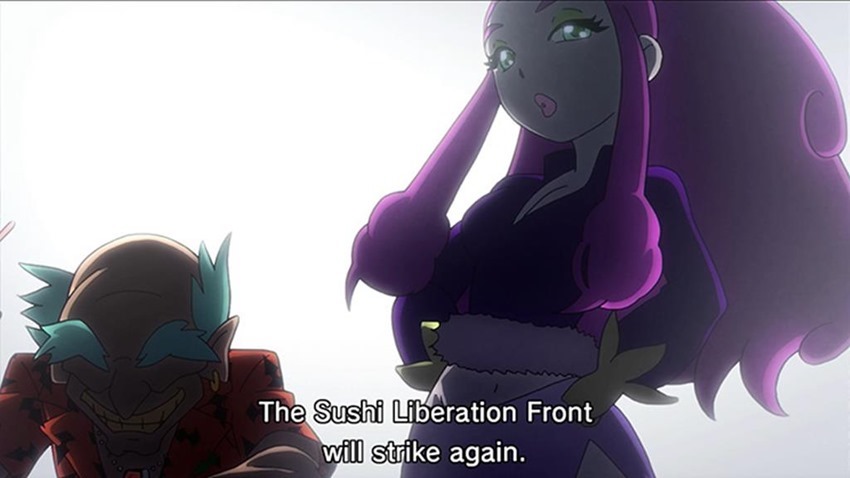 To defeat the empire, Musashi becomes a Sushi Striker; a warrior able to consume incredible amounts of sushi, using the plates left behind as a projectile weapon. From the overworld map, Musashi must move from match to match, outwitting and out-eating overwhelming orders of opponents.

At first glance, it appears to be a simple matching game, not unlike the sort of match 3 games popularized by Bejewelled, and later Candy Crush. It’s similar enough. Confronted by rapidly moving conveyor belts stacked with plates of the delicacy, Musashi needs to link together two or more of the same coloured plates, eat their sushi and stack the plates before flinging them across the table, hopefully doling out enough damage to dish out defeat. There’s a little more depth and strategy to it though. The taller the stack of plates the harder they hit, but you’ve only got 7 seconds to build your stack. 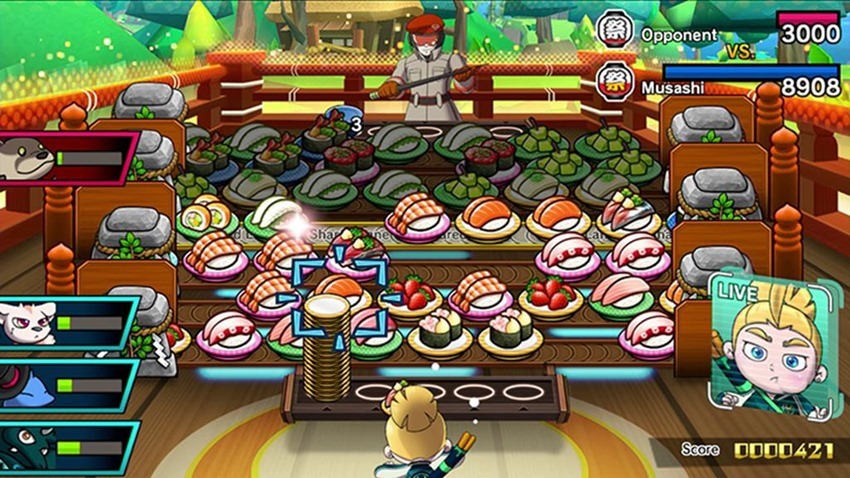 To do that, you can use either the touchscreen in handheld mode, or regular Joy-Con controls, sliding along similarly-hued plates as they come by. There’s more to it still. Different quality sushi – as denoted by the colour of those plates – deal differing amounts of damage. Should you manage to link seven or more plates, you’ll draw out a glowing plate that’s able to link with anything, allowing you to build up impressive stacks. From there you can either manually throw the plates, or when you’ve amassed six stacks of plates, have them automatically damage your opponent as you build more. There’s a lot more depth to it still, as you learn that fruits and sweets help you recover your own depleted health, combos of stacks of plates deal multiplied damage, and well-timed attacks can even topple enemy stacks. 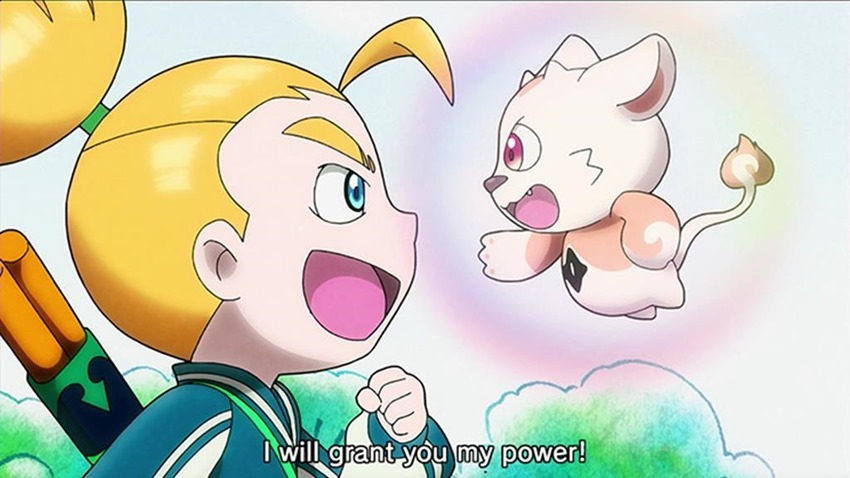 The Sushi Sprites, who’re a little like Yo-Kai or second-rate Pokémon, each bring with them their own skills. As you eat sushi in a round, skills gauges fill up, allowing you to unleash specific sprite’s skills. You can bring three of the collectible critters into battle, mixing and matching their unique abilities to best suit your play style, and to counter your opponent’s own sprite-enabled powers. Some, like your first sprite’s sushi bonanza, turn all plates on the screen into the same colour, making for easy linking. Others, like Sweets Paradise, turn all the plates into sweets and treats, allowing for a big HP boost. You’ll get sprites who allow you to deal extra damage, others who let you increase the opponent’s lane speed, and a myriad of other offensive and defensive abilities. While there are many possibilities, you’ll probably find a handful of ones that work with the way you play, and you’ll stick with them.

Both you and your food-fabricating furry friends gain experience and level up, increasing in stamina, defense and power. As the sprites level up, the quality of the sushi they dispense also increases/ At the end of each battle, you’re graded, from a lowly D Rank, up to a glowing Rainbow S, dependent on how well you’ve done; how much damage you dealt, how little of it you received and how many combos you racked up. Each battle also has three goals – like winning within a certain time, eating under a set amount of plates and the like, giving you more reason to replay levels until everything’s ticked off. 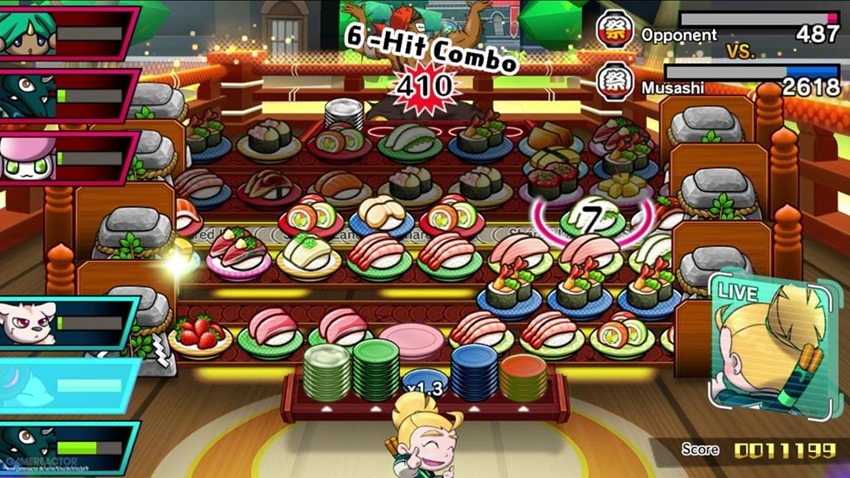 Using items won from combat, you can also increase the power of the Sushi Sprites individual skills. For some reason, when they’ve sufficiently levelled up, they go through an evolution. It doesn’t really do much other than change their physical form, but I suppose it would be odd to have creatures that don’t evolve. Progressions through the overworld is largely linear, with a few branching paths and a couple of hidden levels.

Like the best sorts of puzzle games, Sushi Striker’s charm comes down to both skill and luck and is also better when you’re playing against real people. Sushi Striker has options for both online and offline multiplayer. You can play on a single screen with split Joy-Con, or take to playing against both friends and random people online. In my own experience, I haven’t had much luck finding opponents online, though Buddy Battles worked just fine, barring the occasional screen-freezing spikes of lag. There’s a frenetic, rhythmic cadence to its action puzzling that’s multiplied when you’re playing against a human opponent.

Even alone, it’s fun to play – for a while. Eventually, Sushi Strikers starts to wear thin as the similar scenarios and enemies all start to become tiresome. Sure, you can switch up Sprite abilities to inject a bit of variety into everything, but after the 150 or so battles that make up the single-player campaign, I don’t feel the urge to play this anymore, at all.

Likewise, the originally charming Saturday-morning anime cartoon cutscenes become hum-drum, especially as the tone of it moves from whimsical to taking itself altogether too seriously – though the theme song is still delightfully catchy, and will forever be etched into my brain.