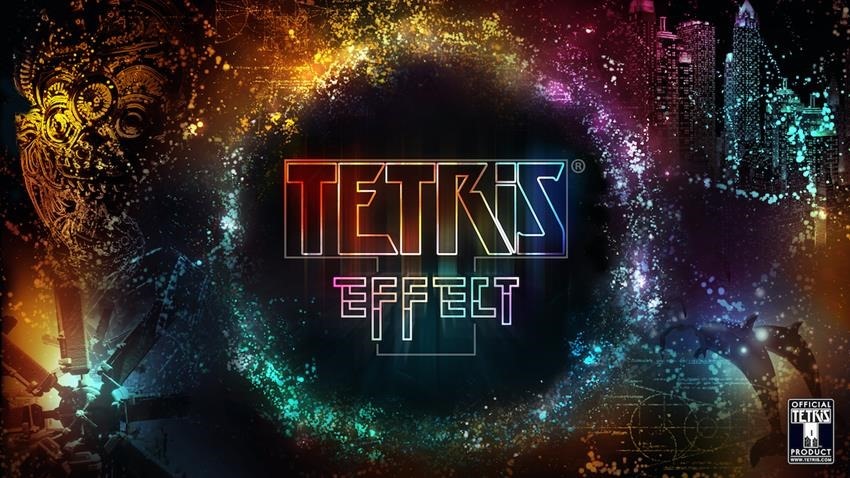 Depending on who you ask, Tetris is either one of the closest games to perfection ever created, or just a ridiculously old formula that you’ve never clicked with. The simple premise of the puzzle game and its endless difficulty had helped it remain relevant over the decades, even as new designers each make attempts at altering the formula and providing new elements to experiment with. Tetris Effect isn’t that type of game, retaining the true Tetris DNA. But it’s the parts around it that make this addictive puzzler something refreshing and engrossing again, giving you the best reason yet to lose hours of your day to building up that well.

Developer Enhance is known for its musical approach to puzzle games, given their success with both Lumines and Rez in the past. Tetris Effect is less of a unique game itself though, replicating Tetris down to its core tenants. All the weird rotation rules, hard and soft drops and increasing speeds are here just as you remember them, with Enhance working closely with the owners of Tetris to ensure that each movement and action is exactly up to code. The only changes here include the ability to hold a piece and freeze time entirely. By hitting R1 or L1 at any point, you can store the piece currently dropping the matrix and swap it with whatever you’ve been holding, which is limited to once a turn. It makes every drop a little deeper, as you not only have to think about whether you have a good combination lined up with your next piece, but whether you have a third piece store that’s an even better choice. 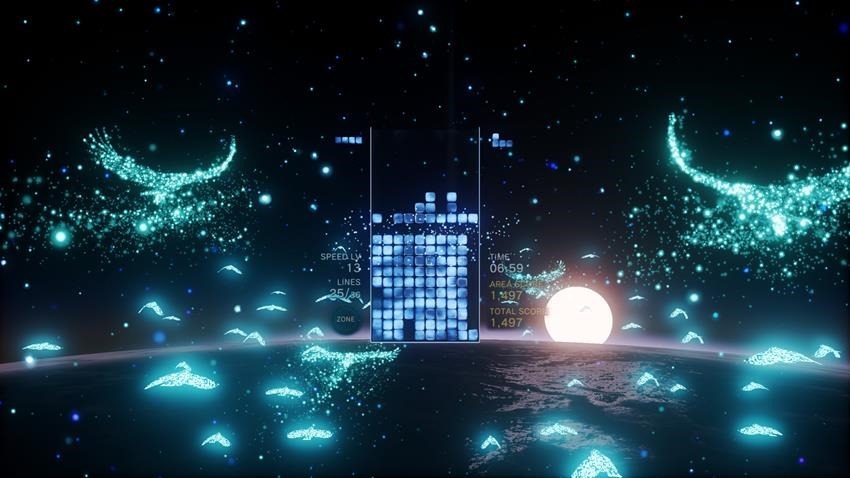 In addition to holding pieces, Tetris Effect introduces its own ability that slows down time and pauses tetrimino drops for a limited time. During this effect’s duration all your line completions are moved to the bottom and stack until the effect wears off. There’re big points combinations for clearing multiple lines in this way, but it also gives you the chance to fix mistakes at the bottom of your matrix quickly. It doesn’t entirely change the way you have to play, given that you’ll need to build up a meter to use this ability by playing well beforehand, but it’s one that beginners can use to give themselves a little breathing room and one experts will likely pick apart to bend to strange, effective ways.

While Tetris itself has only received these two small changes, everything around it in Tetris Effect is what pulls you into the puzzle game in a new way. In Journey mode – the expansive campaign that is split up into sets of three or four stages – each stage features its own visual and musical theme. These can be anything from a bright neon blue representation of the ocean with a calming, melodic electronic accompanying track, to an eerie, fiery portrayal of a mysterious ritual with a heart-pounding beat that spikes your adrenaline. These stages are undeniably beautiful, using a range of complex pixel effects and shifting background displays to make each stage feel like a journey through a surreal dream. Enhance has presented unique and captivating experimentations with visuals before, but Tetris Effect takes this to a new level with its sheer amount of variety. 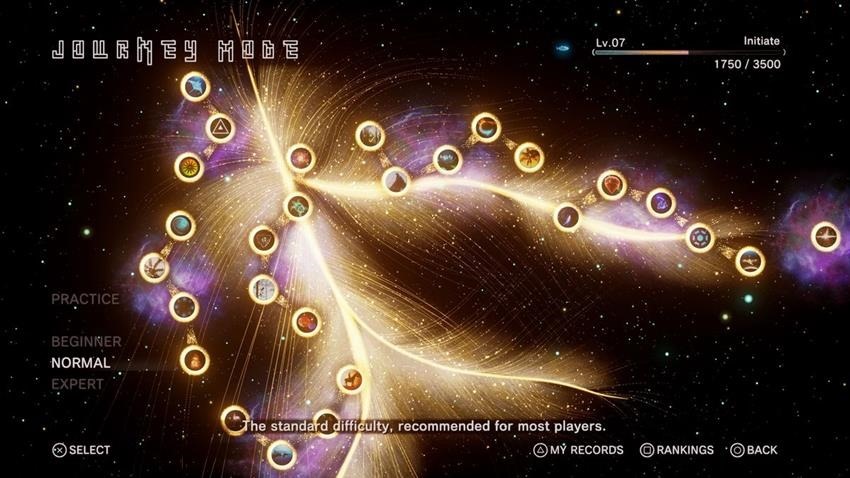 Each stage features its own soundtrack too, which is neatly integrated into the moves you make during your game. Each shift to the left or right produces a chime that syncs perfectly with the background music, while more frenetic stages will link that up with additional controller vibrations and visual cues. Much like Lumines you’ll start to sync up your movements with the beat of the song, which has clever connections to how difficulty is calculated in each stage too. Journey mode isn’t a linear climb, instead giving you distinct stages that will either test your speed or calm you down. The music intrinsically ties into these transitions, and singular stages themselves can go through a variety of phases to keep you on your toes. There’s not one way that Tetris Effect tests you in Journey mode, making each new stage a delightful treat to unwrap.

There are instances where this delicate balance can feel slightly unforgiving, and it’s frustrating when a three-stage long run is brought to a sudden end when you encounter a devious difficulty spike. There are even present in Tetris Effect’s beginner difficulty mode (the easiest after Normal and Expert), which can be an unwelcoming hurdle to deal with if you’re not as familiar with Tetris as the game expects you to be. They’re infrequent but required to overcome before you can continue with your journey. A more lenient mode or the ability to skip stages could’ve been a more forgiving solution. 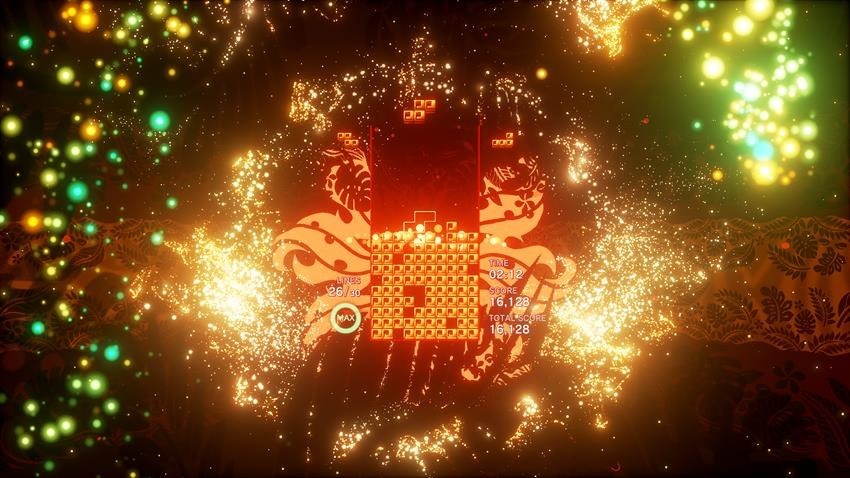 Outside of the long Journey mode is a surprisingly large amount of on-demand content too. Tetris Effect gives you four categories of challenges to play, each of which features game modes that put slight spins on the classic ruleset. One, for example, places infected squares in the playing matrix and multiplies them based on a countdown. You’re tasked with attempting to clear as many of the infected squares in the allotted time, while also not filling the matrix to the top. Another mode with a more relaxing spin lets you choose which stage and song you’d like to play, without the fear of losing and a simple timer or line score tracking your progress. There’re even wild modes such as the ridiculously fast master mode or the random mystery mode to compete with, increasing the playing speed and tossing random condition sets at you respectively. Tetris Effect gives you so many ways to play the game but also the flexibility to choose what you want when you want, which is appreciated.

There’s no direct multiplayer either in Tetris Effect, but its modes are linked up to a persistent online interface that shows you what other players around the world are playing at a given time, and scores that you can compete against. There’s also going to be weekend events now that the game is live, giving you the chance to co-operate with other players by engaging with a mode. If the collective player-base reaches a collective score during the event, you’ll be rewarded with in-game avatars and cosmetic rewards. It’s ancillary to the overall experience and not as enticing as direct Versus Tetris, but it’s a nice way to engage with fellow Tetris fans. 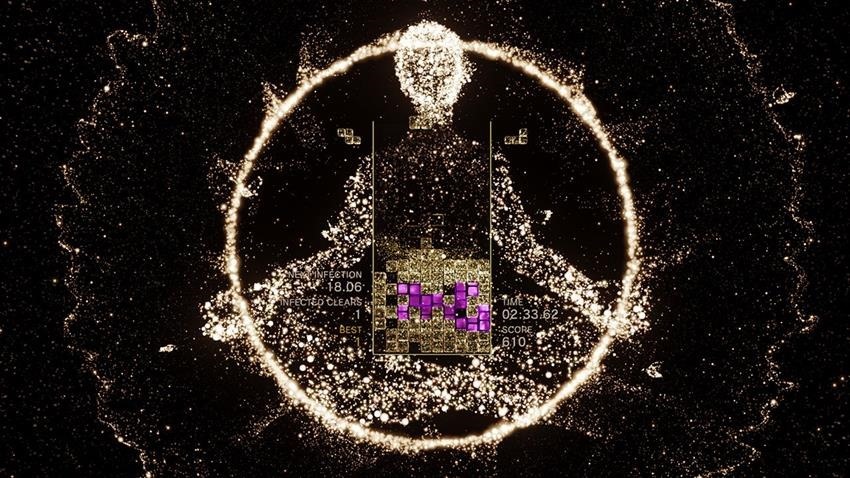 Tetris Effect is also supported by PlayStation VR, without any restrictions on features or modes. Given the immersive nature of PSVR, playing Tetris Effect with all your sensory receptors focused solely on the game is near transcendent. It’s an overwhelming experience in the best way, beating you with bright bursts of particle explosions and stunning 3D soundscapes for its exceptionally punchy soundtrack. You lose some crispness in the overall presentation (in standard 2D Tetris Effect is stunning in 4K), but it’s simply mandatory to try at some point if you have the headset to spare.

Tetris Effect isn’t about a revolution of the classic puzzle game, but it never needed to be either. What it is though is an exceptionally well-polished recreation of the game, with the unique visual designs and engrossing soundtracks that Enhance is now known for in their games. Tetris Effect reaches an even high bar across the board in those respects too, with a vast range of different stages eliciting different emotions and suiting different moods that give you fine control over what type of Tetris you want to play at a given time. Its infrequent difficulty spikes are disappointing, but they’re a small blemish on what is otherwise a near perfect way to play this timeless puzzle adventure.