When it comes to sequels, my expectations often tend to be quite high. Silly me. Mostly I end up getting bitterly disappointed. When it comes to horror movie sequels however, I have absolutely no expectations as these are almost always complete cash-ins waiting to prey on the gullible cinema-goer. Which is perhaps why I get such a smile on my face when a sequel comes around that actually isn’t half bad. It’s such an unexpected shock that you invariably end up enjoying it more than you should. Which is exactly what happens with The Strangers: Prey At Night, sequel to the 2008 movie The Strangers that essentially takes the formula from the first and copies it verbatim. What makes it so surprising though is that despite the familiarity and unoriginality of its premise, it finds unexpected ways to scare you that the original wasn’t quite able to and is somehow able to maintain a strong feeling of tension throughout. It’s a well-executed piece of thriller which makes for a refreshing change to a genre littered with wasteful moments in movies. That it is also a sequel that is released so long after its original also means we aren’t tired of the formulaic parts either – film producers please take note.

What makes this movie work so well is that it slowly builds up the tension and uses a strong sense of uncertainty and helplessness to keep it high at all times. While there are the inevitable jump scares, they get built up and pulled off really well more often not. Most movies give you moments to breathe between these though, but director Johannes Roberts is unrelenting in keeping the scare factor going and at no time do you, much likes its characters, ever feel safe. A word of caution though that as a result, it’s also not for the faint-hearted, so if you struggle to survive your standard 2-minute jump scare scene without serious heart palpitations, this one will most certainly stress you out. 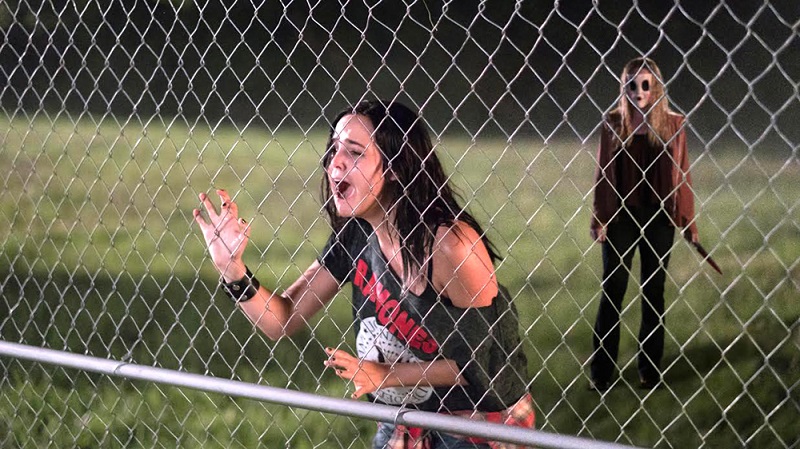 It’s the type of execution that works really well, though admittedly will only fool you once because once the movie comes to an end, you do feel a little disappointed at the pointlessness and stupidity of it all. I could delve into the plot about family making a journey to their daughter’s new college and plans to meet up with some family friends at a trailer park that happens to be the hunting ground for our trio of killers, but essentially it’s a story that doesn’t serve any purpose other than to offer up an opportunity for the random killings to begin.

At the start of the movie, the script by Bryan Bertino and Ben Ketai drops little hints that more is coming with regards to character development and what said victim’s family are going through but these never materialize or add up to anything. Instead, they only serve to distract you from the real arc of the movie which is a bunch of people going through every extreme situation possible to stop said killers whose motives you know nothing about. On paper, you would be forgiven for thinking The Strangers is actually terrible and gives you no reason to really care. Amazingly though you do end up caring because of how well executed the film is and in particular how likeable the films cast (Christina Hendricks, Martin Henderson, Bailee Madison and Lewis Pullman) ends up being. The Strangers: Prey At Night is hardly a good movie, but when expectations for horror sequels are at incredibly low levels, it does actually impress you by how unexpectedly entertaining it is despite all of its flaws. It’s not the kind of movie that will leave you wanting more, but it offers up a good 80 minutes of tension while it lasts. And in a genre of mediocrity, that’s refreshing.