Here is the scenario: You are at home watching your Netflix or TV series, and you stumble across an episode of Community, Stranger Things or Dexter’s Lab. They are talking about this hip game called Dungeons & Dragons. Seeing all the characters playing as badass knights and wizards you decide, “I wanna get in on that, but I don’t know where to start.” Have no fear, reader as I will guide through the wonderful (and kind of terrifying world) of Dungeons & Dragons. 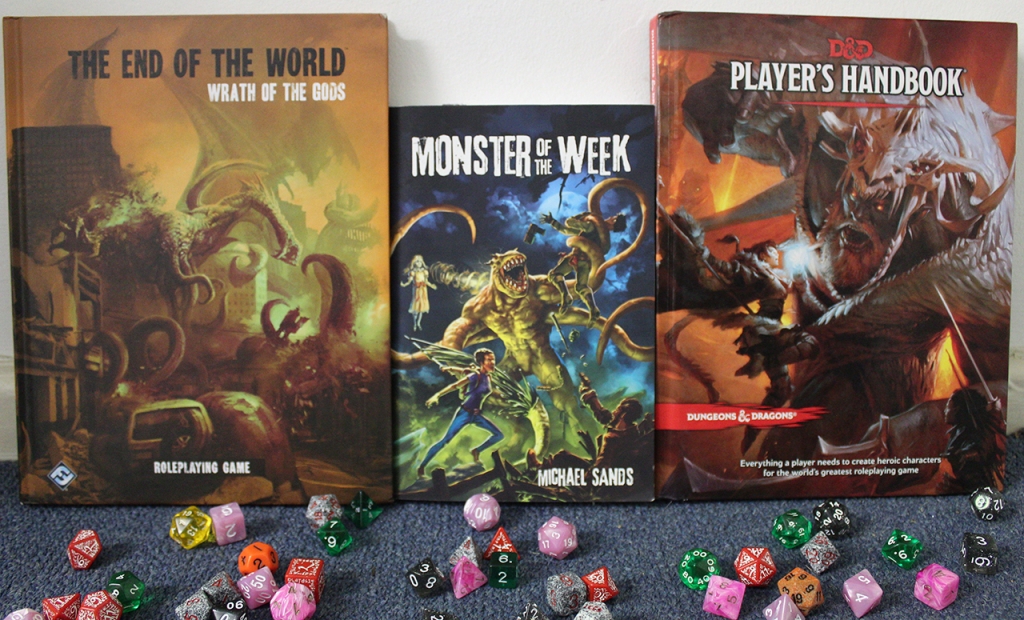 Dungeons & Dragons has had several different editions and supplements over the years. You might hop on over to your look geek retailer to grab a copy of the rulebooks and then notice there are a bunch of different versions. My recommendation would be to get the 5th edition of Dungeons & Dragons. The main reason for this is that it is the most beginner-friendly of all the editions – the rules are far looser and the systems in place favour roleplaying instead of complex battles that revolve around movement. It is also important to point out that this is the most recent edition of the game to come out (also the most popular), Making it the easiest one to obtain should you wish to play.

What you will need is the Dungeons & Dragons Player’s Handbook, Monster Manual and The Dungeon Master’s Guide. Now I am going to be straight with you; buying all of these books is going to slim your wallet. Depending on where you get them, one book could set you back in the range of R600 to R1000. I would say the most vital book you need is The Player’s Handbook though. It is what teaches you all the rules of the game and how to make characters.

There is also the digital option with the newly launched D&D Beyond. With this site, you can purchase digital copies of the rulebooks. There is also the bonus that if you buy off this site, it becomes the Google of Dungeons & Dragons. Want to know what Thunderwave does? Look it up. What is the HP of a Beholder? It is right there, buddy. Another plus for the site is that getting the books digitally significantly reduces the price. All those books I mentioned before are now $30.

If you still don’t want to blow all your money on playing advanced make-believe, there is also The Starter Set. It is a box that contains an abridged rulebook, a pre-made adventure for new Dungeon Masters, five pre-generated character sheets and a set of special dice. This set is substantially cheaper than buying just one of the books. I highly recommend this as your starting point for getting into the world of Dungeons & Dragons. 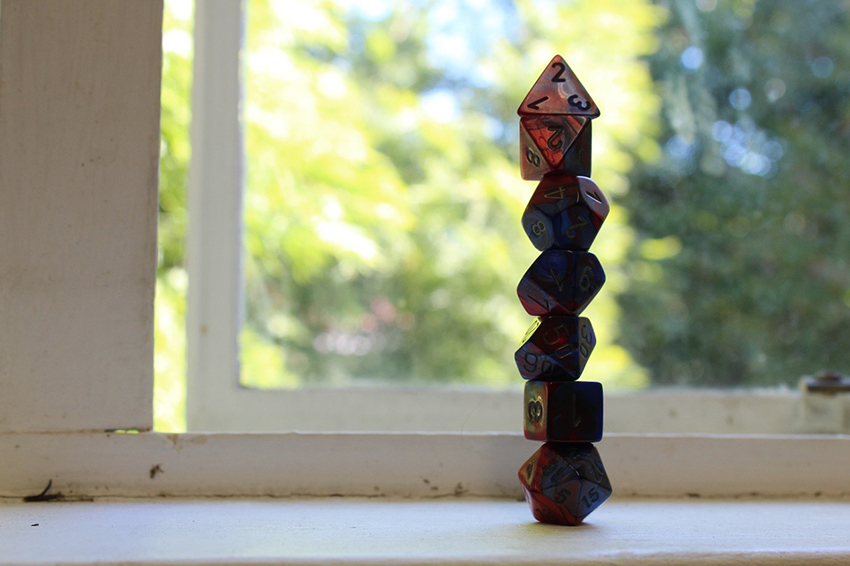 So, remember how that starter set I mentioned had a set of dice? Those are the number one thing you need to get. You cannot play any roleplaying game without dice. You specifically need a set like this one, which is 10-sided (this may change depending on the game you play). If you don’t want to buy a set there is also an app for that.

What do you use that dice for? Well, the basic gameplay of D&D is that every player creates their own characters based on the classes/rules in your edition of the game with their own skills and attributes. These characters are put into a scenario which you have to play through, by simply saying your character is going to do a thing. It could be an attack, climbing, swimming, intimidating someone, etc; whatever the situation calls for. You then get to roll your dice. The Game Master – that’s the person in charge of the game (more on that in a bit) – will then decide if the number you rolled (plus modifiers to increase the number) is enough to beat the challenge based on the game’s rules. This does mean you will fail. A lot. That is what separates D&D from other games. If your first choice fails, it’s not necessarily the end, but it does mean everything changes. Now you have to think on your feet, react accordingly and see if you don’t die horribly.

To play D&D, you will need a few players, but that should be easy enough as you are a cool person with plenty of friends. You also need a place to play but a room with a big table and chairs. Besides for some pen and paper for character sheets and a map to track your adventures, that’s all that is required to start (Eventually, you can migrate to the crazy complicated setups with huge 3D maps that some longtime players use).

If for whatever reason your friends don’t want to fight dragons then there is always D&D Adventurers League. The league is a series of officially sponsored D&D events that usually happen on a weekly basis at your friendly ‘geek store’. They are designed so that you can just show up with nothing and they provide everything you need to go on an adventure. You can even be a DM for the league if you prefer weaving stories.

The creators of the game, Wizards of the Coast, provides a whole host of resources to help people of all skill levels get into a game. If you still cannot find people to play with, places like Facebook and online forums such as Reddit can help you out there as well. 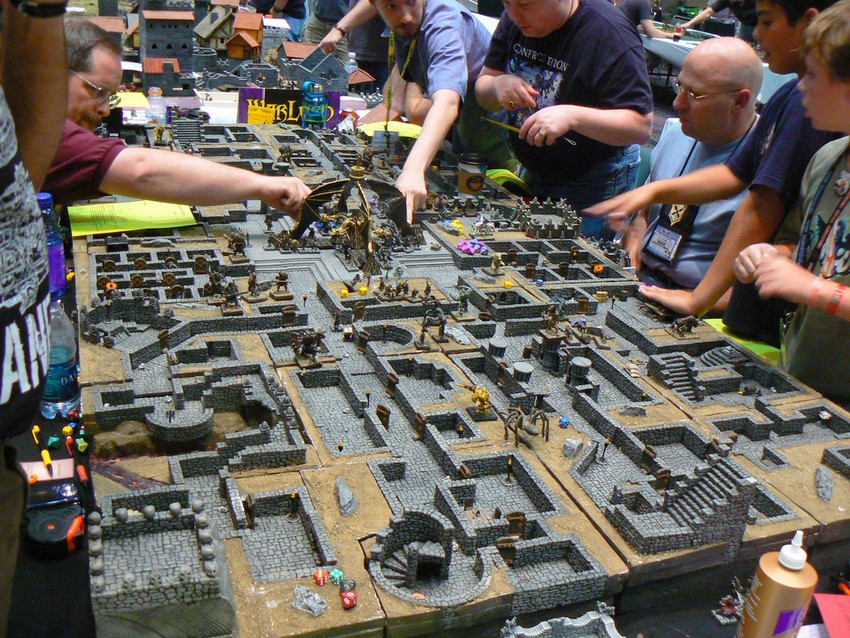 Once you have gathered your party you now need to decide who will be the Game Master (or Dungeon Master). Since you were the one who bought everything then it will most likely be you, reader, earning you the job of creating an entire world and story for a bunch of players to follow (Warning: they will not follow the story). That is why pre-made adventures are your friend. Books such as The Curse of Strahd give you everything you need to make an adventure: Maps, enemies, a plot and a super sexy villain that your players will have to defeat. Pre-made adventures are also available on D&D Beyond as well.

One last, but very important aspect to point out as well: When you are running any campaign, either pre-made or of your own creation, do not be afraid to bring in things you love. You’re not going to be sued for taking the battle of Helm’s Deep and throwing it into your game. If you end up being a player, this works as well. If you love Han Solo, then be him. Dungeons & Dragons is all about your imagination and the crazy scenarios that you can think up. You can keep it simple, or make it elaborate – it’s really up to you!

Hopefully, you have now gained the knowledge to venture forth into the world that has far too many dungeons, and not enough dragons. It does seem intimidating at first, but the community around this game is welcoming and always ready to help those who wish to learn. Do not be afraid of all the knowledge that lies before you. It is worth the studying so that you get to the situation where the bard seduces the dragon.

Paramount has announced several delays to its big films over the next two years, along wit…