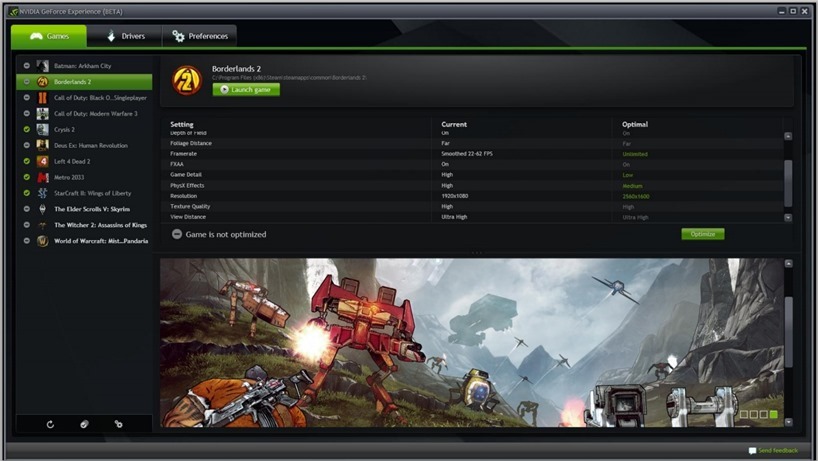 Part of the reason why I’ve loved Nvidia for so many years is simply their support. Great hardware aside, Nvidia is usually on the ball with the drivers and software, and even more so after the launch of their game optimisation tool, GeForce Experience. Handling game recording and settings tweaks, Experience has been a staple tool for Nvidia owners for a few years now, and it’s just going to get even better.

Or at least some features will, while others will be tauntingly dangled in front of you.

First up, the good. GeForce Experience now has an in-game overlay that allows you to start recording or broadcasting gameplay without having to initiate it before launching the game. Better yet is the inclusion of an instant replay function, which automatically buffers gameplay so that you never miss that one awesome team fight or headshot. It’s all arriving next month in an early access beta, and it seemed pretty damn solid all the way back at Gamescom.

Included in the beta is also GameStream – a brand new feature which allows your friends to watch, play and takeover your games. In a similar fashion to PlayStation 4’s SharePlay, GameStream can turn online multiplayer sessions into couch co-operative ones, if you have the internet to support it. And that’s where the kicker really lies. GameStream will require a minimum of 7Mbps upstream on both ends to work – making it pretty much unviable at the moment locally.

Regardless, it’s a really awesome feature that works incredibly well with shared-screen co-op games like Trine. Eventually our internet will catch up, but for now we’re free to just enjoy half of the new tools Nvidia has to offer for free next month.