Home Gaming MSI’s got the right Skylake motherboard for you

It’s official. We’ve known about Intel’s Skylake for months – but today it’s been properly detailed by the microchip giants. Intel’s brand new Core i7-6700K features 4 physical cores with support for 8 threads thanks to Intel hyper-threading. With a base clock frequency of 4GHz and 8Mb of L3 cache, it’s a beast. For the more cost-conscious Intel Adherent, there’s the Core i5-6600K with 4 physicals cores, and no hyper-threading. Both chips support support Turbo Boost 2.0 technology and dual-channel DDR3L and DDR4 memory depending on the motherboard, of course. And that’s where MSI has you covered.

Like many purveyors of fine PC equipment, MSI has a new range of boards to take advantage of Skylake’s 1151 pins utilising Intel’s new Skylake-enabled integrated chipset, the Z170. MSI though, is going above and beyond – with a range of motherboards to suit every budget.

Today, we’ll look at the fun, high-end enthusiast stuff. There are three boards to choose from if you need the top of the line stuff from MSI. The M9 ACK, M7 and M5 – all branded with an M so you know they’re made to help you master your games – are the enthusiast level boards, sporting the sorts of features the enthusiast gamer needs.

Each of these boards, to varying degrees, expands on 4 core pillars; the four areas of focus that set MSI above its competition. 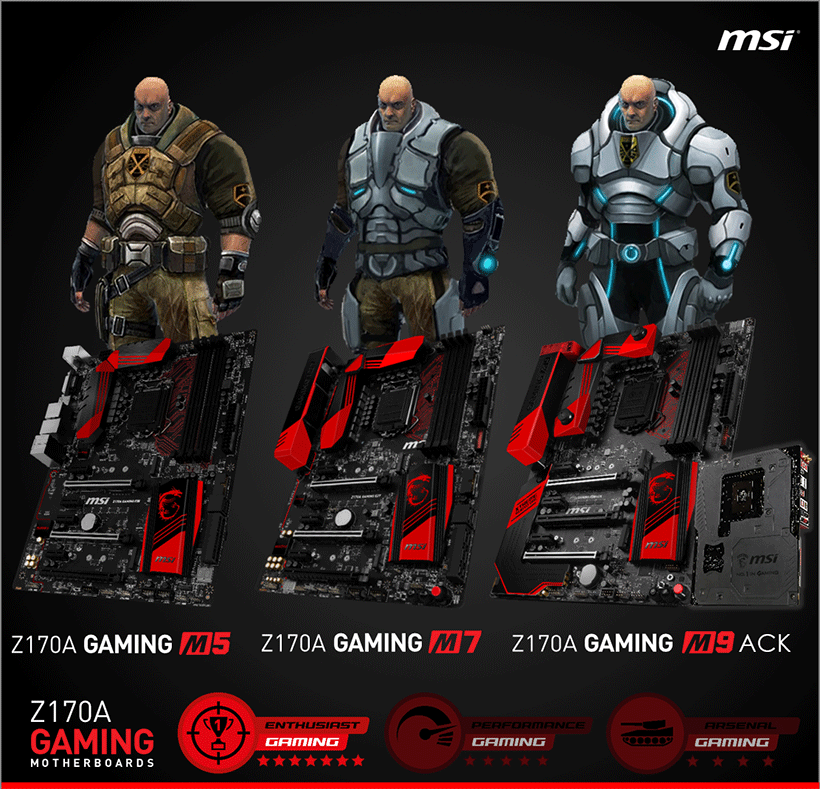 When it comes to speed, MSI don’t just want you to rely on your CPU and GPU to deliver the best gaming experience; they want every bit of your experience to be blazing fast. So that means that – depending on the board of course – you’ve got the fastest in networking, with a tuned gigabit Ethernet port. The M9 also features built-in 802.11 AC 1535 Wifi from Killer networking offering a theoretical throughput of 867mbps and extreme range. You can also bridge your Wifi and Ethernet connections to increase your throughput. There’s also some software-driven bandwidth management, giving you the ability to tune your networking on a per game basis, reducing dropped packets and giving you a better overall online experience. Neat!

The boards also come equipped with DDR4 Boost: “By fully isolating the memory circuitry from other components, DDR4 Boost ensures the memory signal to stay pure for maximum performance and stability,” says MSI.  Their boards also feature second generation USB 3.1, giving you the very fastest USB standard, plus that new-fangled C-type port that makes it so you never insert your USB peripheral the wrong way around, turn it over, try plug it in again, and then realise it was right the first time anyway. 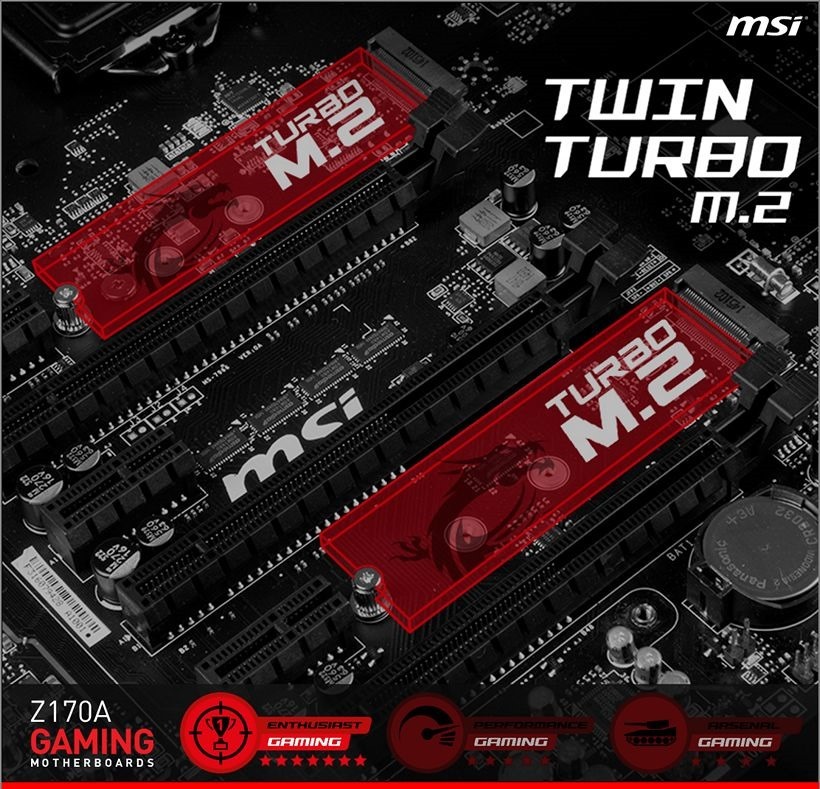 If you’re the sort that needs the fastest in disk access, you’re covered there too – with twin turbo M.2 ports allowing you to plug those new SDD’s right in to the board for 64 Gb/s data transfer.

And that’s really only the beginning.

When it comes to PC gaming, sound is often overlooked – but it’s one of the most important facets of game immersion. The right sort of audio hardware produces the best sound, and that’s where the M9 once again shows its superiority. It sports a SABRE Hi-Fi DAC powered by a C-Media 6632A to deliver 120dB 384 kHz/32-bit audio. It’s the sort of high-end electronics you get in very, very expensive audio equipment. That’s all useless without some software to drive it, which is why MSI has teamed up with the French audio wizards at Nahimic. They promise that their software offers the best virtual surround, voice clarity and noise reduction on the planet – all of which is done in real-time.

Great features and blazing speed means nothing if your machines gives you blue screens every five minutes, or physically falls apart when you stuff two Titanium X’s in to its delicate PCI express ports. Thankfully that won’t happen here, as the ports are reinforced with cold, hard steel. The M9 ACK even features an armour backing on the base of the board, so that sucker will never warp, bend or buckle. 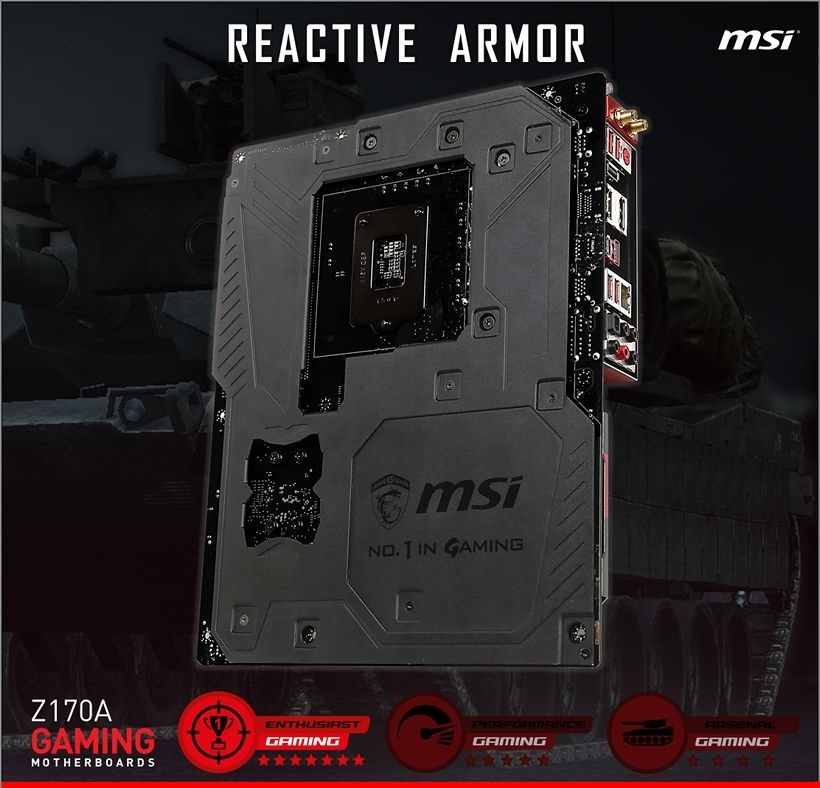 MSI’s “Military Class” branding gets a numerical upgrade once more, with level 5 bringing you high-end titanium caps that can “withstand even higher temperatures and has better heat dissipation.”

The boards all run MSI’s super stable, award-winning award CLICK BIOS 5, which is designed to help you get the most out of your hardware. One of the more intriguing features of the higher-end boards is the ability to enter the BIOS without having functional RAM or even a CPU inserted – so if you manage to severely overtune your clock speeds, you can still get everything working again. Which brings us to that last pillar:

Enthusiasts love enthusiast-grade gear – because it allows them to tweak and tinker to their heart’s content – and if you’ll be rocking an unlocked “K” series, then you’ll get the most out of it with MSI’s expansive suite of overclocking tools. With MSI’s OC engine 2 and its Gameboost software, you can overclock your system with ease, and even take your processor – in steps – up to 5Ghz. The MSI Gaming app allows for pre-set, one-touch overclocking, with a frames-per-second overlay so you can see the quantifiable differences your tweaking gets you.

And if you’re the sort who does that kind of thing manually, knows his way around liquid nitrogen and watercooling, and likes pushing hardware to its limits, then there’s yet another Z170-based board for your needs – one that’s made specifically for Overclocking. 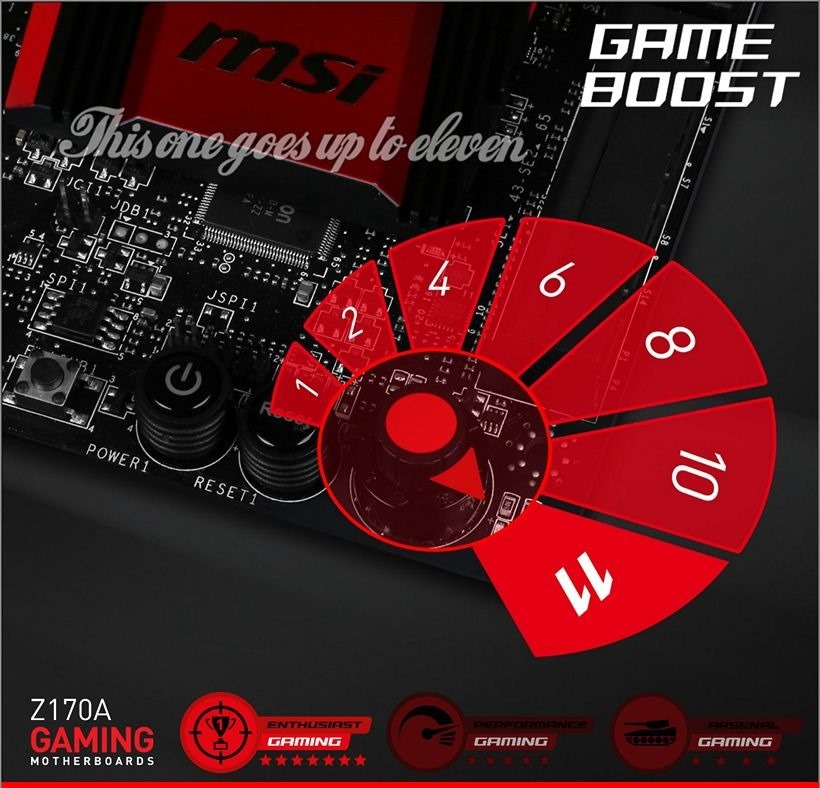 The unbearably sexy, needlessly mouthy Z170A XPOWER Gaming Titanium. It’s a Black & Silver beast with Titanium Chokes, sporting a 16 Phase DrMOS designed for maximum overclocks. It comes with the OC DASHBOARD, a removable add-on board that allows for on-the-fly overclocks. It features dedicated voltage check points, dual bios, debug LED’s and a handy button to clear CMOS for when you really naff things up.

There’s even a toggle for slow mode, to help the system boot up at lower-than stock speeds so you can boot before your system goes in to overdrive. The thing even supports Quad SLI, along with toggles to switch to triple SLI if your overclock’s gone sour.

But what sets each of them apart? Well, of course, the M9 ACK is the biggest, toughest, and most feature-laden of the regular boards. With reinforced everything, the M9 is ready for your dual GPU setups, Water cooling and just about anything else you wish to throw at it.

The M7? Well it’s largely the same as the M9 ACK, just without some of its more pronounced features and armour. The M5 gives you the core features, without many of the frills – so no Killer Wifi, No Sabre DAC, a lot less armour, No Bios Flashback and aesthetic embellishments – but the same core performance. And of course, that’s just the enthusiast-level stuff. MSI has Skylake boards for every budget, with an entire range of boards of both their performance-level tier, and their newly named, more casual-focused “arsenal” range.

The performance boards all come with mystic lighting allows gamers to set their system’s LED lighting to any of the visible 16.7 million of them, taking that Steelseries approach to lights (Incidentally, these boards are all SteelSeries approved, whatever on earth that means). You can even set the lights to grove to your music. Either way you slice it, there’s an MSI Z170 board for everyone. Choose your destiny. 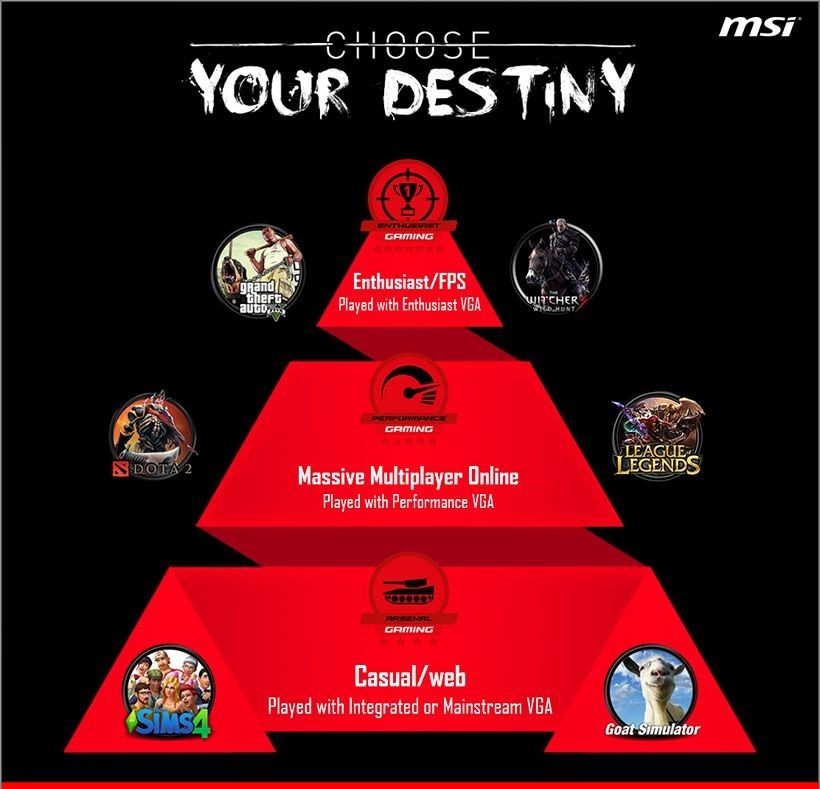 We don’t have pricing yet, but this shiny new hardware should all be available from your retailer or distributor of choice today.