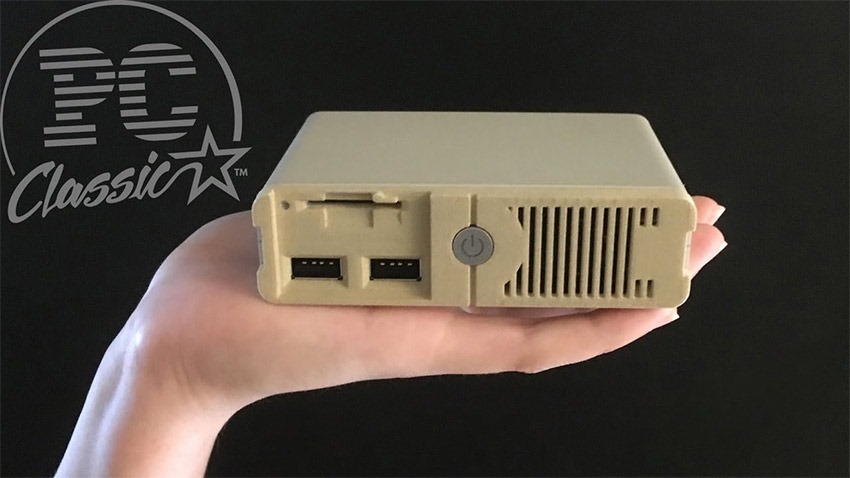 Little mini consoles have become oddly popular things. Nintendo kicked it off with their NES, and later a SNES  – and we’ve since seen diminutive Mega Drives, miniaturised Neo Geo arcades and next month, Sony will be releasing its own mini PlayStation.

Whenever we talk about these things, there’s inevitably some joker who pipes up and says something about a mini Classic PC, which is usually followed by another chiming in saying that it wouldn’t be necessary because PC’s are mostly backwards compatible with everything already anyway.

Well, now there actually is going to be a mini classic PC, which seems a little stupid because PC’s don’t work in generations like consoles and most everything is already playable anyway. Older games can be had on CDPR’s Good old Games, and DOSBox exists for emulating the system environment for older games.

The company making it, Unit-e, says that all of the games on the system will be officially licenced- though there’s no list of which games it might include.

We have previously licensed and/or collaborated with major IP holders, including Apogee, Sega, Namco, and Andamiro. We’re a Maryland company with strong ties to the Baltimore development scene, which includes such major studios as Zenimax (and by extension, id Software), Bethesda Softworks, Firaxis, MicroProse (former members), Simutronics, and more.”

Games will be pre-configured to work with the system and will work with gamepad, as well as USB mice and keyboards.

And honestly? It really just seems like a Raspberry Pi running DOSBox with some licensed games, and a sort of gross case that looks like an old, yellowed PC box. Unit-e is crowdfunding the thing right now.