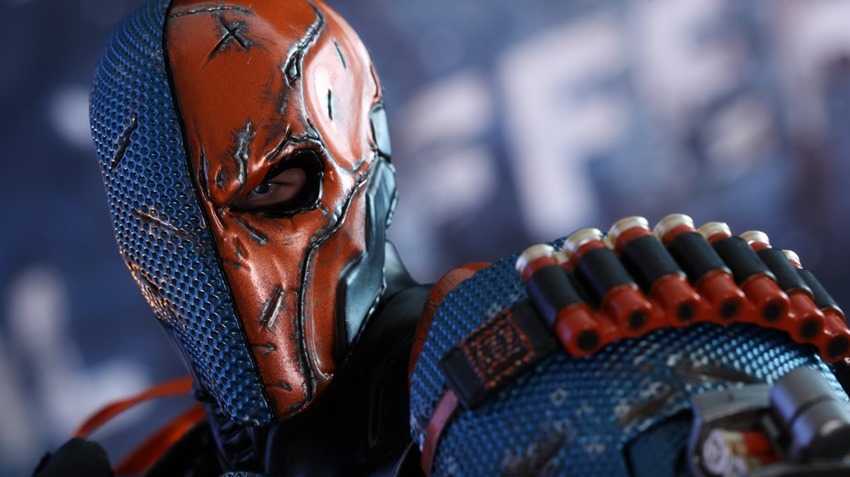 I may have gone overboard in the last two years, with my Batman collection. Right now, I have a shelf above my head that is home to almost a dozen Batmen. Everyone from Michael Keaton to Adam West and I ain’t stopping any time soon. I know which figures I still need to collect, but I also know which figure I want the most.

It’s a sixth-scale replica of one of my favourite Batman costumes: The Arkham Origins dark knight. Easily my favourite game in the entire series, I freakin’ adore that costume. It’s realistic, it’s as rough as the man inside of it and there’s a bulky charm to the design. That’s the Batman figure that I want, but Hot Toys has shown no sign yet that they’re developing one.

Well until this week that is. While the story here is of the upcoming Deathstroke figure that’ll fit in perfectly with anyone who’s rocking an Arkham Knight series of Batman replicas, it’s the fact that Hot Toys is labelling this collectible as an Arkham Origins version of Deathstroke that has me all hot under the collar.

Sure, the character models may have been exactly the same between games, but if this figure is an indication that I’ll finally get my favourite Batman on my shelf? Ooooohhhhh mmmmyyyyy. While I go take a cold shower, here’s a closer look at the one-eyed bandit known as Deathstroke:

Slade Wilson, AKA Deathstroke, is one of the world’s greatest and most deadly mercenaries in DC Comics. He was part of an experimental super-soldier program which allowed him to gain metahuman strength, speed, and healing abilities. Today, Hot Toys is very excited to officially introduce the 1/6th scale collectible figure of Deathstroke inspired by the designs from the highly acclaimed video game Batman: Arkham Origins.

The collectible is expertly crafted based on the appearance of Deathstroke from the game featuring a newly developed helmeted head sculpt with one-eyed mask, a meticulously tailored multi-layer Deathstroke suit with battle damage and weathering effect, an interchangeable battle damaged chest armor plate specially designed for the alternative katana holding pose, an array of detailed weapons including Deathstroke’s ballistic staff handle with interchangeable ends displaying different battle modes, a remote claw, a pistol, a katana, two grenades, several detachable bullets off from the shoulder armor and a figure stand with specially designed backdrop!

How much will it cost ya? THE HEAD OF THE BAT! Or alternatively, around $250/R3500 when Deathstroke ships out to Gotham City next June.