Home Entertainment The 13 best kills of Friday the 13th 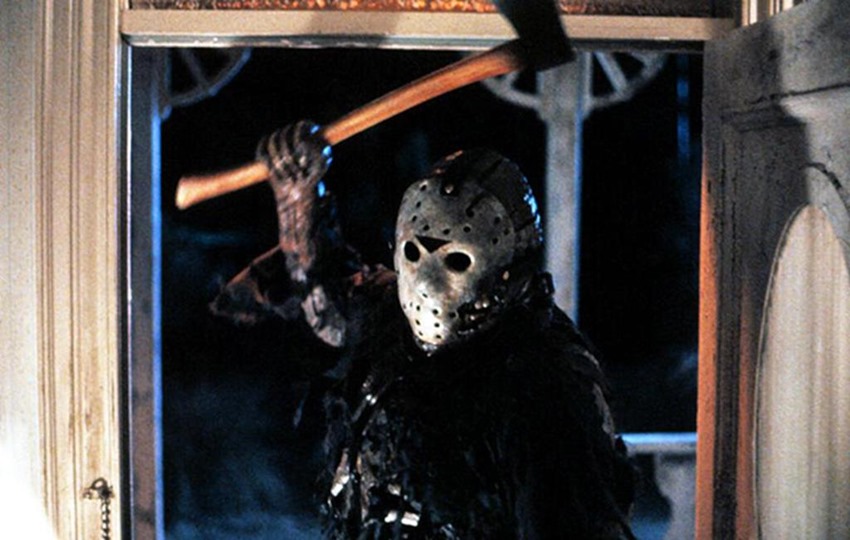 It wouldn’t be Friday the 13th if there wasn’t at least one story of a machete fanatic wearing a hockey mask who was busy going on a rampage that targeted young and attractive people. With over 180 kills to his name alone, Jason Voorhees is to horror what Superman is to comic books. He’s relentless, unstoppable and he always finds a way to back from beyond the grave.

Here’s a look at some of Jason’s best kills in no particular order, from across the Friday the 13th series. Sorry guys, Freddy vs Jason unfortunately does not count on this list. Otherwise the cornfield massacre would have been at the top of the list.

The remake to Friday the 13th may have been lacklustre at best, but it was a film that still managed to throw a few surprising curveballs at fans who thought they could see every kill coming. Take the death of Chelsea for instance, who narrowly survives being run over by a boat after her boyfriend takes a career-ending arrow to the head. Hiding under a nearby dock while Jason searches for her, you’re expecting to see Voorhees pop out of the water and pull her down, with the lake turning red.

Instead, Chelsea dies quickly and cleanly with a machete through the head. It’s surgical, unexpected and over quickly, which all adds to up yet another classic kill.

There’s a running gag through Friday the 13th films, of Jason being a more efficient conductor of electricity than a wet puddle. Freddy vs Jason saw the masked man electrocute Deputy Stubbs with a control panel of carnage and Friday the 13th Part III saw camp stoner Chuck stoned on a fusebox. The best such instance of machete and electricity mixing together though is when Jason got his hands on video nerd Wayne, who corpse become more flammable than a crate of TNT and managed to sink an entire ship in the process. Shocking stuff. 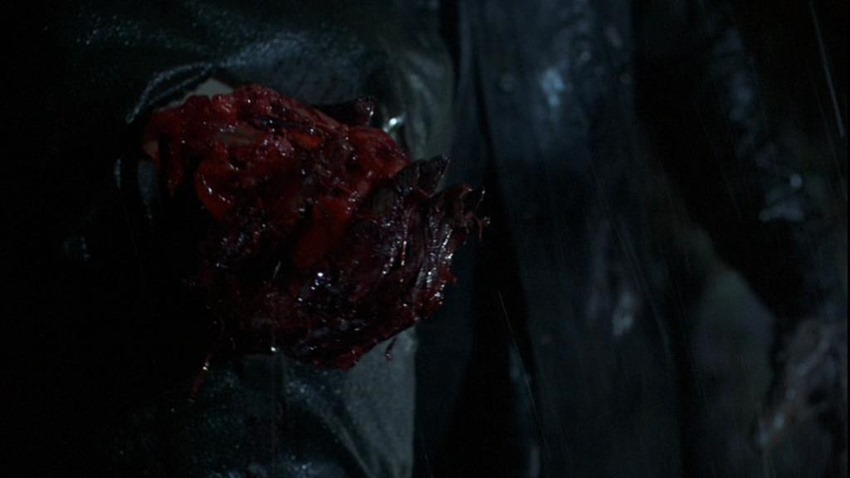 Sometimes, a little bit of blood goes a long way. Back out of the grave and smelling worse than a fridge full of expired yoghurt, a newly reanimated Jason wastes no time in resuming his killing spree as he proceeds to punch the heart out of the first person he sees…literally.

Fun fact: Jason never got his iconic look until the third film in the series, when he “borrowed” a hockey mask from Shelly, the local camp clown. While having a slit throat sounds tame when compared to the other deaths on this list, there’s some added salt rubbed into the wound of this victim when you factor in how he happened to be a make-up specialist who regularly pulled fake death pranks on the campers. What a way to go.

Say what you like about Jason, he happens to be brutally quick and efficient at getting the job done. Case in point here with this timeless kill, when camper Judy attempts to hide from Voorhees inside of a sleeping bag because good ideas were never her strong suit. Jason finds her instantly, hauls her struggling frame outside and instantly silences her with one good whack against a solid oak tree that kills her instantly. Perfection.

Love is a beautiful thing between two people, and fantastic when it’s shared by six. But a session of romance under the sheets between a couple and unwelcome third wheel Jason Voorhees? That quickly comes to a grinding halt when Voorhees decides to kill two lovebirds with one sharp spear as the two lovers are impaled in a moment of love that climaxes in a blood bath. 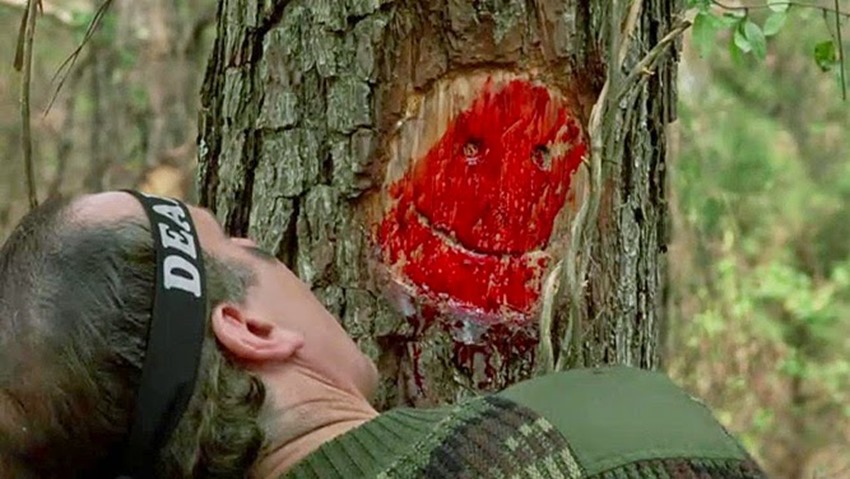 What’s better than a well-executed kill in a Friday the 13th movie? A well-executed kill on someone who totally deserves it. The sixth Voorhees slaughterfest introduces Burt to audiences, and there’s nothing about this fella that doesn’t make you smile with reckless abandon when he eventually crosses paths with Jason. In an act that breaks the laws of physics, Jason sends Burt flying face-first into a nearby train, decorating the smiley face carved into it with the brains and bloods of the mysoginist in a move that…disarms him.

If it weren’t for horror movies, many an aspiring actor wouldn’t have gotten their break in Hollywood when movie producers took note of their ability to sell audiences on just how horrifically they’d been murdered. Crispin Glover is one such talent who got a headstart in the industry, even if his horror movie performance meant that his hand got a start on being screwed into a kitchen table by Voorhees and his taste for the most crimson of wines. One shot machete swipe to the face, and it was all over.

Burt may have been a slob who died a gruesome death, but even his character had nothing on Travis Van Winkle’s Trent, who utterly stole the show as the most unlikable person to ever suffer Jason’s wrath. Having spent most of the film being a jerkass without peer, Trent finally meets his end when Jason viciously impales him on his trademark machete and a nearby tow-truck that speeds off down the road. It couldn’t have happened to a worse guy.

You can freeze a mass-murdering maniac for over 400 years, but you know that the very second that Jason awakes from his cryogenic suspension that he’s going to get right back to work. In the wonderfully cheesy and underrated Jason X (Jason Voorhees, but…IN SPACE!), Camp Crystal Lake’s favourite icon wastes absolutely no time in murdering Adrienne by drowing her in a tub full of liquid nitrogen and then smashing her popsicle head into thousands of pieces. We’re going to need a lot of band-aids to fix that boo-boo.

If there’s one thing you need to know about Jason Voorhees, it’s that his bloodlust does not discriminate. No matter your ethnicity, your creed or your belief system, Jason will happily murder you regardless. He’s also definitely not an ableist, as Jason takes the time to pull off a kill that is utterly perfect in its composition.

The lighting, the sound and the build-up as Mark wheels into frame. That perfect whack of the machete that sends Mark tumbling down a staircase and into a freeze-frame shot. It just doesn’t get any better than this.

Some of Jason’s best kills may come from some of his worst movies. Friday the 13th Part VIII: Jason Takes Manhattan is a prime example of this, as the terrible sequel saw many an iconic kill: Gangbangers stabbed to death with syringes, a boxer had his head punched off in a single blow and one unlucky fella drowned to death in a barrel of raw sewerage.

The best kill in the entire film? A boxer who was relaxing in a sauna, completely unaware of Jason entering the hot box. You know he’s going to die, you know it’s going to be gruesome. But nothing can prepare you for Jason picking up a hot rock and plunging it deep into the chest of his victim, grilling him from the inside in yet another efficient murder that shows off the improvisational nature of Jason’s cruelty.

Last kill on the list? A surprising trio of them, in a scene that you never ever see actually happen fully. Instead, it’s merely hinted at as Jason takes one almighty swing of machete, carving a series of necks in a deft application of steel to flesh.