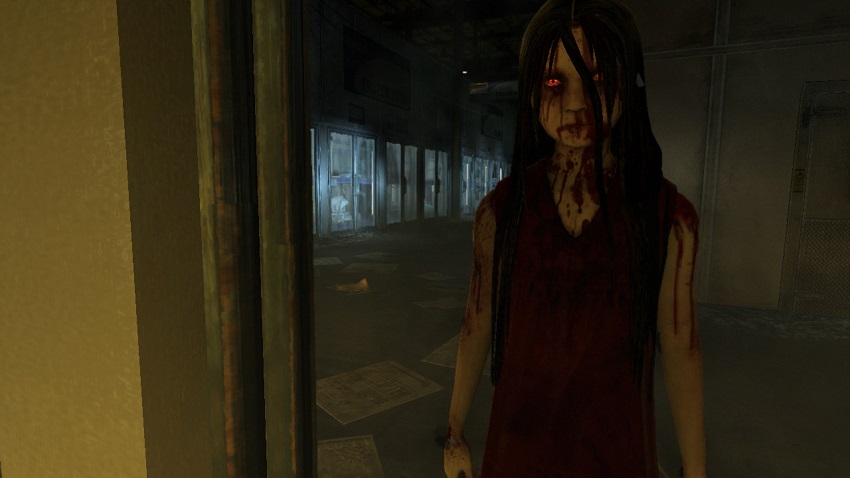 Horror games have always had a home in many a gamer’s rapidly-beating heart – franchises like Alone in the Dark, Resident Evil, Dead Space, Five Nights at Freddy’s, and so many more have provided gamers with plenty of fond memories over the years. But one particular moment has always stood out to me as the pinnacle of the gaming jump-scare – that damn ladder in F.E.A.R. – and if you’ve played the game you know exactly what I’m talking about.

For those of you who’ve never played the game, 2005’s F.E.A.R., or First Encounter Assault Recon (which to paraphrase Phil Coulson means someone really wanted an acronym that spelled fear), was a first person shooter with still some of the best enemy A.I. in the business. This resulted in many tense and memorable encounters within the game as enemies smartly flanked you and tried to flush you out of cover, all while avoiding your return fire. Combined with the distinct horror aesthetic which was quite unique for the time, made it one of the year’s best games.

It was a stark contrast to what promised to be a scary AAA FPS the previous year, Doom 3, but which instead became utterly predictable jaunt through rooms with locked doors. After an hour I knew the trick was to walk into every new room backwards to kill the monsters that inevitably spawned behind you, and then turn around to kill those ahead of you.

F.E.A.R. tasked the player with assuming the role of the Point Man, a soldier with superhuman reflexes, who was tasked with investigating a paranormal event that centered around Paxton Fettel and his telepathically-controlled clone soldiers which had attacked and killed all the occupants of an office building. He was the son of Alma, a powerful psychic who the player would frequently encounter in the form of another horror staple – the creepy little girl.

Anyway to cut a long story short while hot on the heels of Fettel you came to a ladder, one of many ladders in the game, but this one was unique…

It’s the perfect one-two punch of Alma and, then just as you relax, Paxton Fettel. I still remember not being all that scared by Alma’s sudden appearance because it had happened before and was more or less expected. Just like in the clip above when I climbed down the ladder I looked right first and then left, but a bit slower, so Fettel was right in my face. I’m not too proud to say I yelped “oh sh*t!” and jumped when that happened – what I am still proud of is that before I even finished uttering that phrase I’d already nailed him with a perfect headshot. Fright-enhanced reflexes for the win!

Movie jump-scares are a dime a dozen, gaming ones are much harder to pull off because it’s not a passive experience like watching a movie, and F.E.A.R. absolutely nailed this one. And writing this has reminded me of another experience that skaarj scarred me for life, which I’ll tell you about another day.

Welcome to Critical Hit’s 31 days of horror! It’s the month of spookiness, of frights and …