In space, nobody can hear you sequel. Much like the titular Xenomorphs who headline the movies, the Alien franchise is far from dead. It’s merely resting, waiting for a new director with a new vision to come along and revive it. One such director? Neil “District 9” Blomkamp. Clearly interested in one day putting his own spin on the franchise, Blomkamp even posted some concept art online for his idea to a sequel that he never got to helm. But Fox is still interested in making such a movie. And so is Blomkamp.

Speaking to Uproxx, Blomkamp explained that the biggest obstacle however, was himself:

If he were to make the flick, Blomkamp says his movie would be a “whole” standalone story, saying, “…if it’s going to happen, it has to be on my terms. So, I came up with it and I’m bringing this to you. It’s not like, ‘Would you like to do Spider-Man 36?’ I still love it, I love the idea of the movie and I produced way more art than I put out [on Instagram].”

Speaking to ComingSoon, Blomkamp explained that Fox had been unaware of the art that he had commisioned, but they were imporessed with the fan reactions. “Fox didn’t know that I was developing it, so in that sense, it was completely unsanctioned and just basically for fun. To me, it wasn’t for fun. To me, that was what I wanted to do next, and I spent a lot of time doing it, and there was a lot of effort that went into. Like when I could take breaks between Chappie’s post-production winding down as VFX got under control.”

The issue was more like whether I feel like directing another film at all. Not really whether Alien is the right or wrong film, if that makes sense. (Sigourney) knows about it and part of it was just inspired by speaking to her on set when we were filming Chappie, and getting her thoughts on Alien and what she thought of the movies that came after Aliens and what she felt about Ripley and what was incomplete for her about Ripley. There was so much fuel in what she was telling me.

Alien and Aliens are probably my favorite films so was I was like, ‘Sh*t, I wouldn’t mind messing around in that world for a bit’ so I just sort of self-funded the artists to work on the artwork. I did way more artwork than I released, probably ten times more and did a lot of writing. I have a pretty cool film just in case it happens.

I’d love to see a Blomkamp Alien movie, but the man most likely has a busy schedule right now after having wrapped up on Chappie. Still, just imagining Blomkamp’s signature style behind the camera applied to the Alien franchise, gives me all kinds of goosebumps.

Wait… is The New Mutants now part of the MCU? 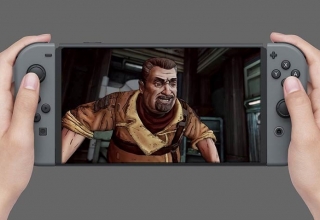