2013’s Pacific Rim was the greatest live-action feature film anime adaptation ever made despite the fact that it wasn’t actually based on an anime. Perfectly suiting writer/director Guillermo Del Toro’s unique visual imagination, the acclaimed filmmaker had taken his love of Japanese Kaiju (aka giant monster) movies and merged it immaculately with mecha anime like Gundam and Neon Genesis Evangelion, leaning heavily into the trademark tropes of its source, no matter how silly. And I loved every Kaiju-punching second of it. I can’t say I loved Pacific Rim Uprising quite as consummately though. 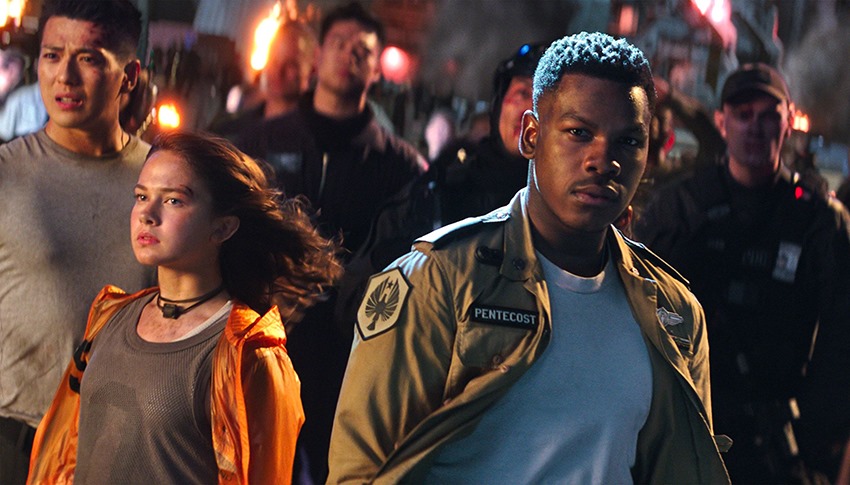 That’s not to say a good time can’t be had in this long-delayed sequel though. Watching a skyscraper-sized Jaeger (the robots humanity built to fight the Kaiju) uppercut a nightmarish Lovecraftian beastie through a building while a rocking guitar riff jams in the background will never fail to put a smile on my face. In that regards, sequel director Steven S. DeKnight (Spartacus, Marvel’s Daredevil) delivers in spades, as he stages some ridiculously enjoyable rock ’em sock ‘em giant robot spectacle, with an early brace of fights staged in Australia and the Siberian wastelands standing out, while the film’s protracted final battle reminded me happily in places of classic tokusatsu Japanese TV series.

Helping to keep up that happiness is star and human charm dynamo John Boyega as Jake Pentecost, the son of Idris Elba’s apocalypse-cancelling Stacker Pentecost. A decade earlier during the events of the first film, Pappy Pentecost sacrificed himself to end the war between humanity and the Kaiju by blowing up his own Jaeger to seal the dimensional rift in the Pacific Ocean through which the monsters were invading. Unlike Jake’s adopted sister Mako (Rinko Kikuchi), Jake wasn’t there for his dad at the end having dropped out from being a Jaeger pilot years before. Now he finds himself partying it up in and making a living out of the wreckage of that war, stealing and selling old Jaeger parts. 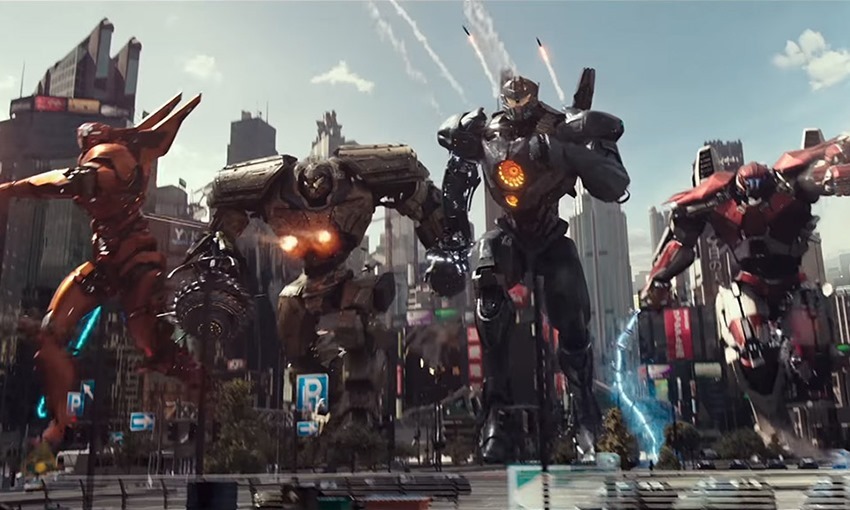 When a thieving disagreement between Jake and young amateur Jaeger builder Amara (Cailee Spaeny) lands them both in the crosshairs of the Pan Pacific Defense Corps, the now PPDC senior official Mako gives Jake a choice: Go to jail or re-enlist and help to train the next generation of Jaeger pilots like the resourceful Amara and the rest of the group whose names you won’t remember. Predictably, it’s Door no. 2 for Jake.

Also waiting on the other side of that proverbial door is Jake’s by-the-book ex-Jaeger co-pilot Nate Lambert, played with a life-sapping inertness by Scott Eastwood. While Boyega elevates every scene he’s in, he has to work twice as hard when Eastwood is around though. If at some point during the movie Eastwood’s face had peeled back to reveal two tiny pilots actually operating him, I would not have been surprised.

Luckily, wacky scientists duo Hermann Gottlieb (Burn Gorman) and Newt Geiszler (Charlie Day) are back to distract you from Eastwood’s mechanical blandness, although their odd-couple chemistry has been dialled down. Geiszler is here to introduce a new wrinkle into the narrative though thanks to his new boss Liwen Shao (Jing Tian), whose company plans to roll out centrally-controlled Jaeger drones, making Jake, Lambert and the rest of the pilots serving under the PPDC’s Marshal Quan (Zhang Jin) obsolete. That is until, right on cue, a new monstrous threat emerges that will require a whole lot of human-controlled Jaeger fists being thrown into slimy Kaiju faces.

DeKnight shows a much lighter approach here than his predecessor, using an energizing pace and entertaining bouts of levity mostly centered around the highly effective Boyega to rocket us between action beats and plot points quick enough to hopefully make you not care when central characters go from feuding to friendly faster than you can throw a rocket punch. Not that there actually are that many plot points in Pacific Rim Uprising – something which was admittedly also the case for the first film. With that original film though, Del Toro layered the world with so many tiny details that it built up an intriguing mythology. Here, despite the film’s ramping up in scale on so many levels, that mythology ends up spinning its wheels a bit, barring a final line of dialogue hinting at the future direction I – as well as many other fans – had hoped this sequel would already take.

And while Pacific Rim Uprising is an immensely technically proficient film boasting top-tier VFX, it lacks some inventiveness in art design. Not to mention all the atmosphere Del Toro steeped his film in through a strong use of shadows and neons and grimy textures has been replaced by a rather flat and un-stylized world. The result is a homogenized and personality-free affair that feels more like a Saturday morning American cartoon with a helping of Michael Bay’s Transformers films thanks to a few borrowed trademark Bayisms (luckily with none of the convoluted, bloated heavy metal dreck that franchise has been churning out though). 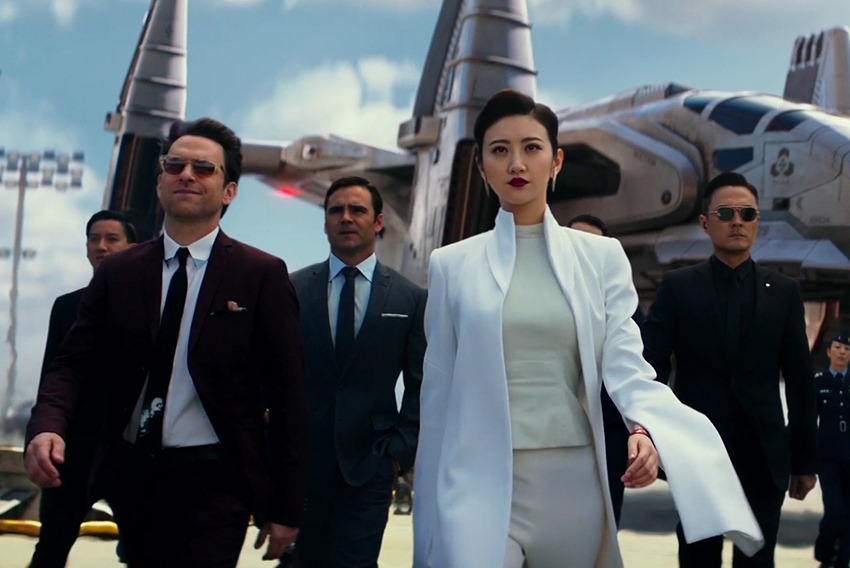 You can practically also almost see the studio footnotes running along the bottom of the screen as Pacific Rim Uprising has been obviously tailored to try to land the most franchise appeal. The first film had soft box office numbers in the States but was kept profitable by an international effort led by Chinese audiences. And so, it comes as no surprise to see large portions of the film’s story, cast and setting directly appealing to the Asian market (though it has to be said that the diversity is refreshing as well). And while newcomer Spaeny is good as Amara, especially when bouncing off Boyega’s Jake, there’s no real reason to have her in this film though other than to fill the obligatory four-quadrant blockbuster Spunky Teenage quota. 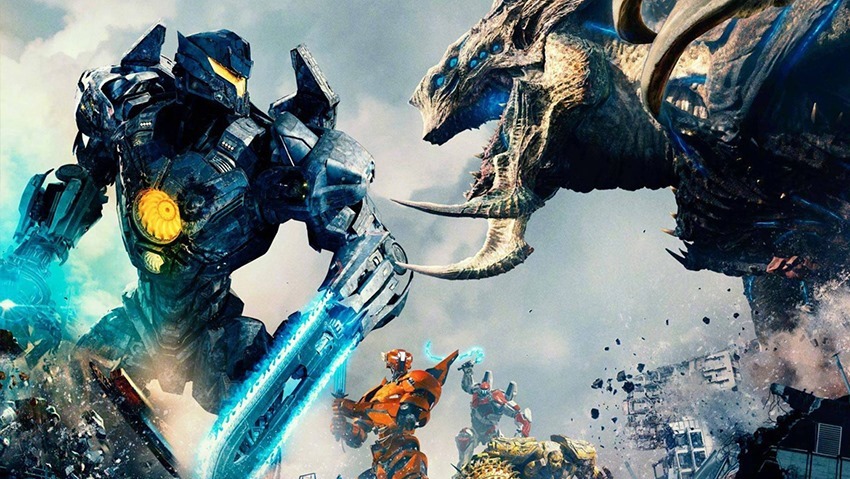 And yet, despite these flaws, Pacific Rim Uprising still turns out to be a lean popcorn-munching good time. It simply cannot be understated how effective Boyega’s seemingly endless supply of explosive young action hero charisma is in this regard. You also can’t deny DeKnight’s acquittal of himself when it comes to the simple brutal glee of watching giant robots slugging it out with giant monsters.

In the end, I don’t think Pacific Rim Uprising as good as the original. It lacks the unique gonzo weirdness and balls to the wall loyalty to the trappings of its “source material” that the first film embraced so much, and it also has a frustrating lack of ambition in certain aspects of the narrative. But – most importantly – it is a bunch of fun though. If that’s all you’re looking for, then you should be good.

Nick watched it with me and agrees that it is a load of fun but actually thinks it’s better than the first. But what does he know, right?