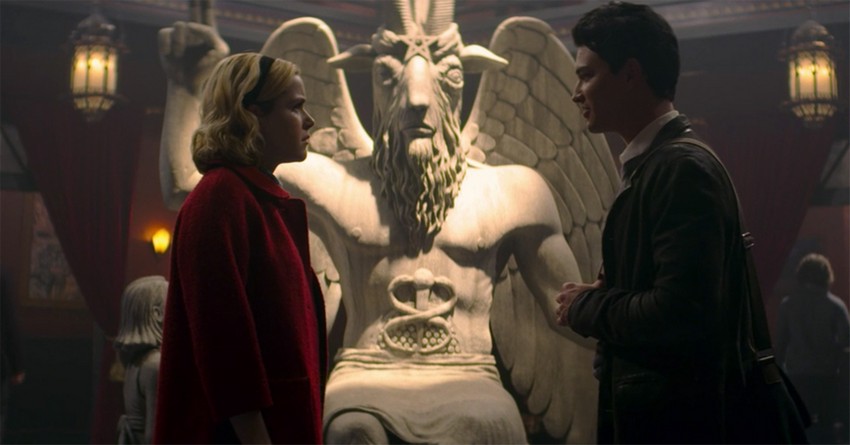 They say the devil is in the details. Well, The Chilling Adventures of Sabrina sure has a whole lot of details. Many were quite surprised when Netflix’s recently released reboot of the classic cute TV series and Archie comic about a charming teenage witch ended up taking a devilishly dark turn, ditching the kid-friendly approach for something far more mature. Critics and audience members have definitely taken a liking to it, but not everybody is as happy. In fact, one group has their pitchforks out.

THR reports that The Satanic Temple has officially filed a lawsuit against Netflix, demanding $150 million in compensation from three separate claims of “alleged copyright infringement, trademark violation and injury to business reputation,” with $50 million being asked for each allegation. They are also seeking an injunction to block the broadcasting of the show. According to the court documents filed at the New York District Court, the source of the lawsuit is in Sabrina’s use of a statue of Baphomet, depicting the winged, goat-headed deity associated heavily with the occult being looked upon by two young children. The Satanic Temple claims that it had the same statue designed and commissioned in 2013-2014 and that Netflix’s use of this copyrighted artwork without their permissions is illegal. Lucien Graves, the founder of The Satanic Temple, posted a comparison on social media in aid of their case.

For purposes of comparison… pic.twitter.com/AZJvmq1Cks

According to The Satanic Temple, this is not just about using the statue without permission though. They claim that Netflix also “misappropriated the TST Baphomet [with] Children in ways implying that the monument stands for evil. Among other morally repugnant actions, the Sabrina Series’ evil antagonists engage in cannibalism and forced-worship of a patriarchal deity.”

Based on that description, this is clearly a matter of a religious organization feeling misrepresented. Except that The Satanic Temple is not a religious organization. At least not according to The Church of Satan, who released a statement on their official website distancing themselves from The Satanic Temple and also revealing that they have no problem with Netflix’s use of occult iconography in The Chilling Adventures of Sabrina.

Recently, The Satanic Temple has filed a suit against Netflix over a depiction of the symbolic deity Baphomet in their series Chilling Adventures of Sabrina. As a significant number of people seem to be confusing this with us, we would like to clarify that TST is a political activist group that has nothing to do with us, nor with the religion of Satanism which we founded over 50 years ago. The Church of Satan has not filed a suit against Netflix, nor do we have a problem with their Sabrina show, which we’ve previously discussed.

We’ll keep an eye on how this whole thing turns out, but I have a feeling that The Satanic Temple might just have Streisanded themselves by kicking up such a fuss about the show.