Well, you knew this review was coming. 2013 video game reboot Tomb Raider changed my life in some fundamental ways. It also sucked me into the entire franchise retroactively. So I’m a little precious about the character of aristocrat adventurer Lara Croft. I’m also a long-time film reviewer though, which means that watching this year’s big screen origin story was always likely to bring those parts of myself into conflict.

As it turns out, despite some major concerns stirred up by the marketing material, and some serious problems in the film itself, I would still go on to call Tomb Raider probably the best movie based on a video game so far. Not the best game adaptation – because there is a distinction – but the most solid, and accessible piece of cinema entertainment to use a game as its source material. 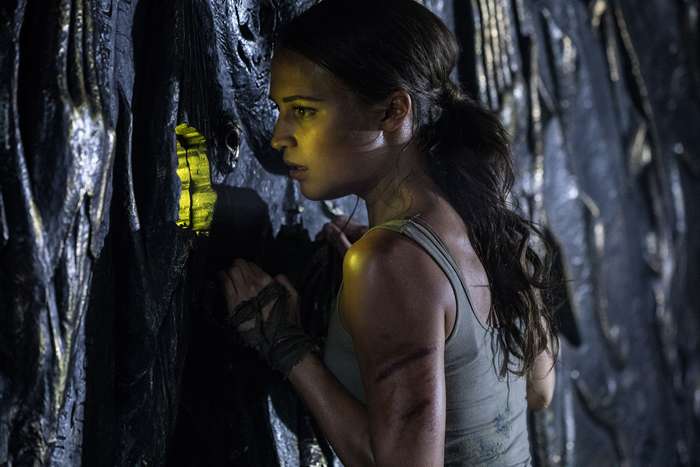 Vikander Croft
As a movie, Tomb Raider stumbles a lot, but the reason viewers are able to mostly forgive it is the spot-on casting of its lead. Alicia Vikander is perfect as the fledgling heroine: equal parts scrappy and soulful. For many fans, this is the Lara Croft they wanted to see in the 2013 game and its 2015 follow-up. The audience meets Vikander’s Lara as a street-smart, extremely wilful young woman who has let her immense potential go to waste. Having skipped university, she works instead as a London bicycle courier, scrambling for a few quid here and there to pay for rent, MMA classes and probably avocados.

For the record, this characterisation is a few shades removed from the Lara Croft of the 2013 game. They are essentially the same resourceful person, trying to live life on their own terms and disassociate themselves from their family name given the painful memories and smothering legacy it comes with. But whereas digital Lara is a by-the-books nerd, doing the societal “right” things like going to college and maintaining a rigid focus on her ambition of becoming a respectable archaeologist, Vikander’s Lara is a smart-mouthed, slightly cocky rebel from the start. She also has a severe case of daddy issues, but we’ll get to that in a second. 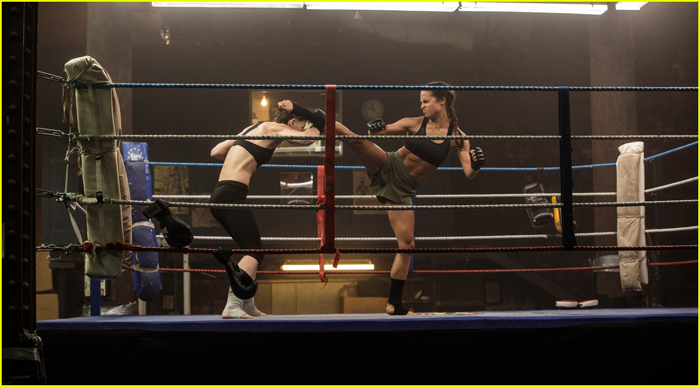 Neither an exact copy of in-game Lara, nor a younger version of Angelina Jolie’s perennially cool, calm and collected thrill-seeker, Vikander’s Lara is very much her own iteration. She’s one tough, slightly crumbled cookie, and throughout the movie she gets put through the wringer, physically and emotionally. Petite Vikander handles both aspects with equal, fierce commitment. You cringe when she’s hurt and you smile smugly when this feisty little underdog shows her detractors exactly what she can do.

This said, personally I thought film Lara’s transitions between moments of vulnerability and untouchable competence felt more jarring here than in the Crystal Dynamics game (a common complaint back in 2013), because the character appears more hard-edged to start with. Vikander also has a particularly high-pitched wail in moments of anguish.

Satisfying, stripped-down action
When Tomb Raider is Vikander mostly alone on the screen, solving puzzles, playing action heroine and getting her arse handed to her in a couple of breathless back-to-back sequences lifted directly from the 2013 game, it’s awesome. You’re totally along for the ride. Director Roar Uthaug has made a satisfying action movie of the gritty, but still PG-13, variety that never strains to appear dark or badass. It’s always fun, and seeing the new onscreen Lara applying rear naked chokes and triangles is just… sploosh!

The supporting cast are also in keeping with the film’s commitment to grubby, stripped-down realism. Gone are the megalomaniac villains of the Angelina Jolie Tomb Raider films. When Lara finds herself stranded on the lost island of Yamatai – all in an attempt to solve the mystery of her father’s disappearance and presumed death – she faces Mathias Vogel (Walton Goggins) and his mammoth force of ten mercenaries. (Like I said, stripped-down). Employed by power-hungry secret society Trinity, Mathias is the opposite of his employees, as well as his madman game counterpart. He may be hunting for the tomb of Queen Himiko, the legendary Mother of Death, but Mathias is a cynical sociopath fed up with his task and only interested in leaving the island. He has an explanation for every supernatural occurrence and his eye-rolling dismissiveness makes him a breath of fresh air.

Mathias is only sketched as a character, but he remains one of the best things about the movie. Daniel Wu’s Lu Ren, a ship’s captain who becomes Lara’s ally, is given much the same amount of development, but he doesn’t fare as well. Just as Kervyn noted in his review, likeable Lu Ren is built up as a character in his own right, only to be forgotten halfway through the movie. 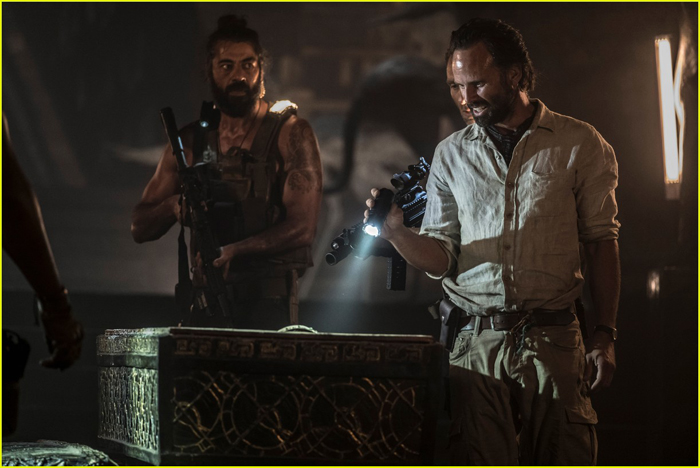 Story slip-ups
Lu Ren gets sidelined because other characters have to take precedence. And that is the biggest problem with Tomb Raider. The movie is building pace nicely when the filmmakers decide, at around the two-thirds mark, to press even harder on the daddy issues. The effect is like a brake. The film stalls, and all energy goes out of it, along with audience interest.

I kept hoping that one moment was simply a fever dream, but nope. Lara is provided with motivation to crack the deadly puzzles of Himiko’s tomb, at least – and these scenes liven things up nicely – but she is also demoted in a film where she’s the title character. Big mistake. The movie’s inevitable “saving the world” mission becomes a matter of teamwork, with Lara pretty much following orders. It’s an unfortunate, and irritating, squashing of agency when it all it would have taken to rectify it is a slight reordering of events, and, possibly, a nod to Tomb Raider: Underworld. Fans should understand.

Speaking of fans, Tomb Raider is liberally sprinkled with references to franchise history. Obviously, the 2013 and 2015 games are the most common source of the easter eggs, but it’s fun to play spot the visual and verbal inclusion. This said, here’s hoping the home release includes deleted scenes because the theatrical cut is missing several moments that featured heavily in the promotional material. And I could always do with a longer look at Lara’s character-developing London life, which was clearly pared down to almost nothing before the movie hit cinemas.

Conclusion
Barring some early standouts like Silent Hill, video game movies have always been mediocre at best. Things have slowly been getting better, though. Of the more recent game adaptations, WarCraft came with all the bells and whistles, but its bulky lore made it exclusionary to franchise newcomers. Assassin’s Creed, meanwhile, started with so much potential but eventually sank under one-dimensional silliness (and more daddy issues). 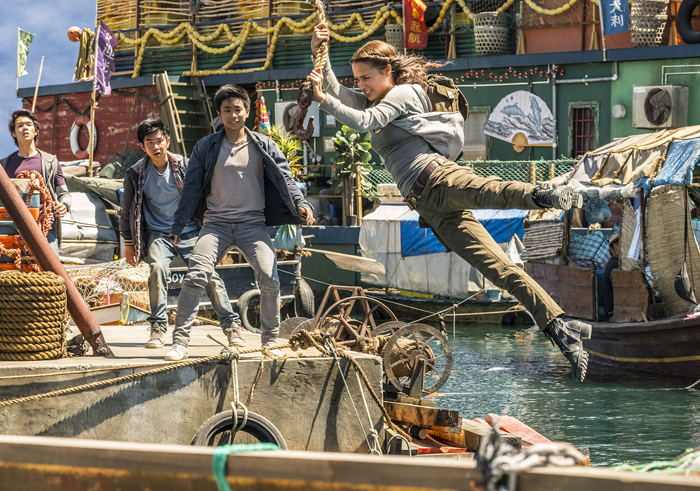 The bar is not high, admittedly, but Tomb Raider hurdles it even weighed down with its many flaws. It makes some serious story missteps that rival triggering a spike trap, and it could have benefited from more daring instead of playing it safe. This said, Tomb Raider makes a powerful point that likeable, emotionally well-rounded heroines go a long way to excuse other project failings. The movie still gets enough right to make it worthwhile viewing for fans and the uninitiated alike – enough that I would be very happy to watch a sequel that further explores Lara Croft’s evolution on her own terms, and actually passes the Bechdel test.