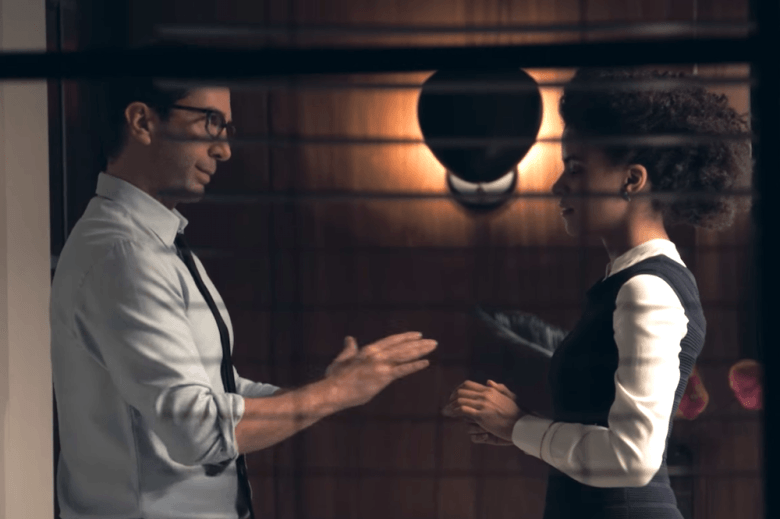 April is Sexual Harassment and Assault awareness month. But those terms are already so loaded, so difficult to talk about. Often in media representations, we see grotesque sexual violence – think of shows like Criminal Minds or Law & Order: Special Victims Unit. When it comes to sexual harassment, the image that comes to mind is too often something along those lines, or at the very least something like a flasher jumping out of the bushes. In reality, sexual harassment is much more nuanced.

Discussing the video series on The View, David Schwimmer explains that his friend and Israeli filmmaker, Sigal Avi, sent him a series of sexual harassment PSAs that she had made in Israel, asking what he thought of them. He was so impressed, he was determined to recreate them for American (and international) viewers. And he managed to get some serious star power on board, including the likes of Cynthia Nixon, Grace Gummer, Emmy Rossum and Bobby Canavale.

What struck me so much, watching the video above, is how the woman (played by Grace Gummer) is almost expected to just brush it off, that the co-worker (Joseph Sikora) is just being nice or complimentary. There’s a mentality among men and women that a “cool” or “thick skinned” woman could just accept or laugh off this kind of behavior, and that a woman who would go off against the aggressor is just overly sensitive or a feminazi. Each video addresses a different form of sexual harassment, all of which will feel frighteningly familiar for many people. Just watch Cynthia Nixon and Michael Kelly in The Doctor, an abuse of power that can feel almost impossible to report:

Anna van Patten and Bobby Cannavale perfectly show how difficult it can be in the moment to stop sexual harassment, even with a room full of witnesses.

It can even happen in a friendly, long-term work relationship, as depicted by Cristela Alonzo and Noah Emmerich.

Emmy Rossum and Harry Lennix show a journalist and politician; while the harassment is clear and uncomfortable, it’s something that a politician or public figure could easily deny.

Finally, this one that shows an all-too-common situation in the workplace is masterfully acted by Zazie Beetz and David Schwimmer.

Each of these videos gave me chills for different reasons. Perhaps it was the way the women were stuck in each scenario, or perhaps it was because of how closely some of those vignettes mirrored incidents in my own life. So many men and women struggle to even identify what constitutes sexual harassment; I can only hope that by showing it in high quality videos such as these, that we all understand it a bit better.

PSA: The CRT filter on the Switch’s NES games can cause temporary image retention

The interface for the NES games is on Switch is slick, and it’s nice that you can create …