Home Competitions Win 2 tickets to the official opening of Cape Town's IMAX to see THE HOBBIT!

We here at TheMovies like nothing more than giving free things to our readers. Some say that might breed a ‘buy love’ following, I say LET THAT BIND US! Our last two outings have been to horrors (much to the squealing delight of supposedly manly men) but this time it’s to Middle Earth!

Ster-Kinekor and TheMovies.co.za are offering 5 (FIVE) readers the chance to experience the official opening of IMAX at the CapeGate with a partner, and to be amongst the first in the world to see THE HOBBIT: THE BATTLE OF THE FIVE ARMIES in IMAX 3D featuring HFR (high frame rate). This is happening on Wednesday, 10 December from 18:30 at Ster-Kinekor CapeGate, Cape Town.

In order to win just comment below and we’ll draw the names of the 5 winners of the double tickets on Tuesday 9th December, at around 10am, so watch this space!

The Hobbit: The Battle of the Five Armies brings to an epic conclusion the adventures of Bilbo Baggins (Martin Freeman), Thorin Oakenshield (Richard Armitage) and the Company of Dwarves. Experience it one last time on the big screen.

Have a watch of the trailer to get yourself in the mood!

Hobbit: The Battle of Five Armies opens at Ster-Kinekor cinemas everywhere on Friday 12 December. The IMAX theatre officially opens to the public on Thursday 11 December with special pre-screenings of the film in IMAX all day.

Follow the movie on social media with the hashtag #OneLastChance

(Competition is open to those in and around the Cape Town only. Don’t worry everyone else, we’re constantly working on expanding our reach!) 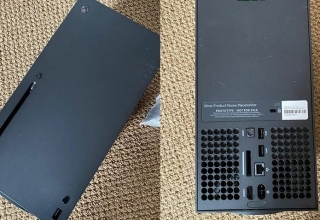 The Xbox Series X is coming out later this year. We’ve seen a few target renders (including a fake one used by AMD) and later, a diagram showing the rear ports of the machine. Now, some leaked images of the Xbox Series X prototype – likely used for software development – have leaked all over social media (via NeoGAF).