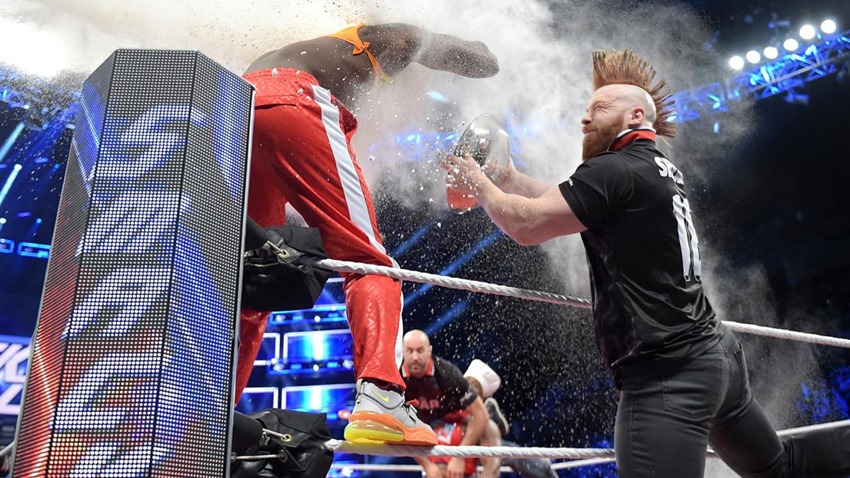 He mad. After last week saw Samoa Joe rock up at the Styles residence, Smackdown LIVE General Manager Paige almost fired the number one contender, but instead decided to let the WWE champion settle the feud at WWE Super Showdown. As for the champ himself? He was staying at home, determined to keep an eye on his family until he knew that Joe was on a flight to Australia.

In a mixed tag matchup, the former Smackdown LIVE women’s champion showed just how much of a force she was to be reckoned with, clinching victory with the Code of Silence submission and earning a tapout victory.

So much for the pancakes of positivity. The New Day were looking to show off their cooking skills, but Sheamus and Cesaro had other ideas, crashing the festivities and sending ingredients flying everywhere. The New Day’s Mr. Bootyworth didn’t escape unscathed either, as the Bar poured batter into his top hat and all over the fella.

The perfect ten may have wanted some retribution against the Apex Predator, but Randy Orton managed to get the upper hand in a scuffle that saw Aiden English possibly break his finger thanks to the heinous actions of his foe.

Aiden English revealed salacious video of him with Lana

No no no. I’m not writing about cheap drama like this. Dammit WWE, you ruined a perfectly good Rusev Day team and I shall not forgive you for this.

Daniel Bryan needed a warm-up match before Super Showdown, Shelton Benjamin needed a chance to prove himself once again in the Smackdown LIVE ring. Both men got what they wanted, but it’s The Miz who walked out of the arena victorious, thanks to a post-match beatdown on Bryan that saw the underdog knocked out with a Skull-Crushing Finale.

Peyton Royce may be headed home this Saturday, but the Empress of Tomorrow had her number as she locked in the dreaded Asuka Lock to earn a victory against one-half of the Iconics.

With an impressive streak of dominance over Charlotte Flair, Becky Lynch was in good spirits and already prepared for a big win at Super Showdown. How prepared? The Lass-Kicker debuted a poster for the event, which showed her standing triumphant with the WWE Smackdown LIVE women’s title over her opponent.

Charlotte Flair was having none of that, as the Queen hit the ring and came out on top of the brouhaha that followed.