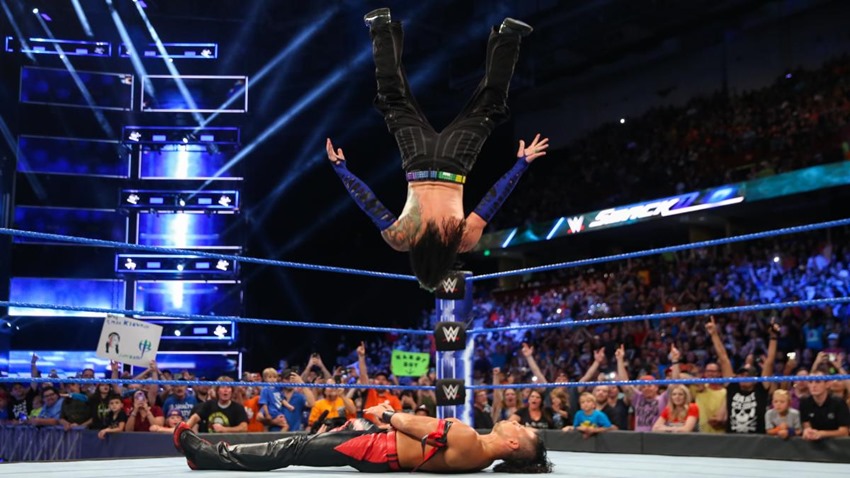 WWE Smackdown LIVE was held from the Bon Secours Wellness Arena in Greenville, North Carolina. Here’s all the action that went down in the build-up to Summerslam.

With Carmella flinging insults at her Summerslam challengers from the safety of the commentators desk, Charlotte Flair and Becky Lynch teamed up to show the Smackdown Women’s champion exactly what she’s in for this Sunday. Lynch’s fierce offense allowed her to overcome the competition, locking Rose in the Dis-Arm-Her and grabbing the win.

A three on two match? That sounds like a handicap…for the local trio of talent that was chosen to face the Bludgeon Bros., as Harper and Rowan quickly bulldozed through the challengers that had joined forces to face them in the ring.

With a full complement of fighters in the ring, The New Day assembled to take on SAnitY and build some momentum of their own in their upcoming tag team bout at Summerslam. One UpUpDownDown double team special later, and the power of positivity was fueled and ready for the biggest fight of their summer.

Looking to get back into Rusev’s good books again, Aiden English’s efforts to put Andrade Almas down before Summerslam were all for naught, as English caught the business end of some running double knees and a Hammerlock DDT from El Idolo.

Having to battle with eyes in the back of his head, Jeff Hardy eventually caught Shelton Benjamin with a Twist of Fate on the experienced ring warrior, but his post-match celebrations were cut short by the appearance of Shinsuke Nakamura. Randy Orton may have been watching from eslewhere and with good reason, as Nakamura’s assault was cut short by Hardy droping the King of Strong Style with his trademark finisher and a Swanton Bomb, sending a message to his Summerslam opponent.