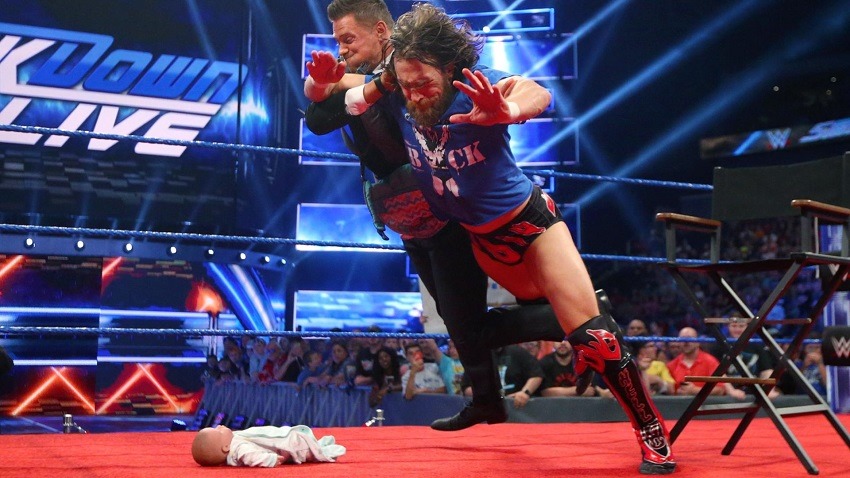 WWE Smackdown LIVE took place from the Ford Center in Evansville, Indiana. Here’s all the action that went down last night.

Bah-bye babyface! The real Randy Orton is back, and he’s after one thing: Respect. After 16 years in the WWE, Orton claims that he happens to be owed some kudos by the WWE Universe and that Jeff Hardy had only just begun to feel the brunt of the deadliest letters of the alphabet: RKO and more was forecast, for the future of the charismatic enigma.

In a stunning upset, the Bulgarian Brute found himself knocked for the count by none other than Andrade Almas. While the match may have been evenly paced, ringside chaos by Lana, Vega and Aiden English saw Rusev walk right into a Hammerlock DDT, which put the super-athlete down for the three-count.

R-Truth wanted some payback for Tye Dillinger’s defeat at the hands of Samoa Joe last week, and that’s exactly…what he didn’t get. Instead, Samoa Joe rampaged right through the oddity, locking him into the Coquina Clutch for a quick victory.

With the memory of a rare loss still fresh in her mind and the upcoming Evolution Pay-Per-View event coming up, the Empress of Tomorrow decided to remind the Iconics of just how deadly she was in the ring, handily putting Billie Kay away in a heated engagement.

So who will challenge for the WWE Championship that AJ Styles has defended for so long? I’ll tell you who it won’t be: James Ellsworth. Arriving to declare that he should be the rightful Summerslam opponent to AJ Styles, Ellsworth got a shocking dose of reality from general manager Paige: No title match at one of the big four shows of the year and a pink slip as he was fiiiiiiiiiiiiired.

With Ellsworth dragged away by security, a distracted Styls felt the iron grip of his true Summerslam opponent: Samoa Joe. Assaulting the champion and locking him into the Coquina Clutch, Joe left a mark on the champ before he signed a contract and left the ring.

With her corner empty and Becky Lynch running on some winning momentum over the last couple of weeks, Carmella needed to play dirty if she wanted to scrape a win out of this encounter. Instead, the Smackdown Women’s champion found herself locked into the Dis-Arm-Her, quickly tapping out and watching as Lynch was awarded not only a match win, but a chance to face Carmella at Summerslam for the gold.

The New Day def. SAnitY to advance to the finals of the SummerSlam Tag Team Championship Tournament

Looks like SAnitY did not prevail, as the New Day used the power of positivity to pick a up a momentous win on their road back to championship gold. With a Midnight Hour locked in by Big E and Xavier Woods, the path to Summerslam continued for The New Day, but they’ll have their work cut out for them in the next leg of the tournament to see who will face the Bludgeon Bros., as The Bar arrived to remind the gang that they’d be locking horns next week.

Deciding to gate-crash the party for The Miz and Maryse’s new reality show, Daniel Bryanw as in for a shock of note when the A-Lister apparently threw his own newborn child at the legend. Fortunately, this wasn’t a repeat of the Gene Snitsky baby-kicking incident, as the doll happen to be a fake and a bamboozled Bryan was caught in a Skull-Crushing finale by The Miz.

To add insult to injury, The Miz grabbed a microphone and not only did he berate Bryan, he continued to promote his TV show. Ouch.