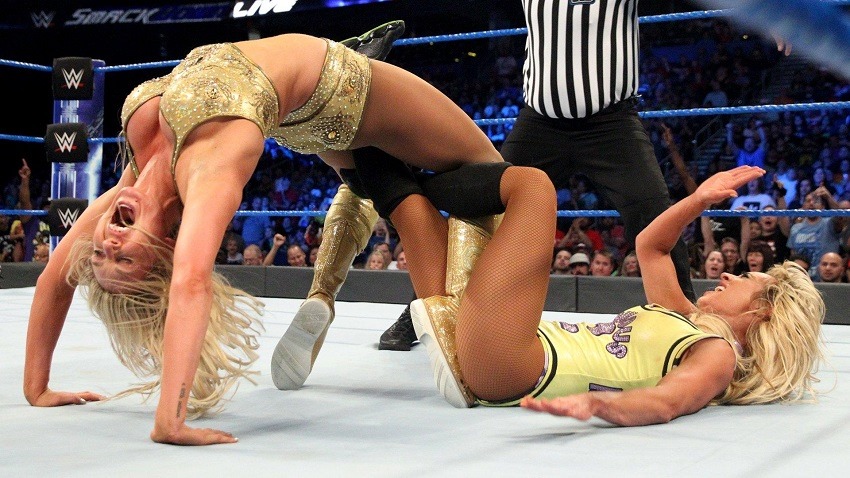 WWE Smackdown LIVE took place from the Amalie Arena in Tampa, Florida. Here’s all the action that went down.

Blindsided by Carmella during an in-ring interview, it looked like Becky Lynch would be going to Summerslam with a few injuries when she faces the Staten Island Princess for the Smackdown LIVE women’s championship. That’s when another royal entered the scene: Charlotte Flair. Chasing off Carmella, general manager Paige decided to drop a bombshell: Carmella would be facing the returning former champion in the main event, and if she won?

The Summerslam match for the championship would become a triple-threat.

The Bar def. The Usos to advance to the finals of the SummerSlam tag team tournament

With a shot at team blue’s tag team championship on the line, The Bar had nothing to lose and everything to gain when they took on the Usos. In pitched match that saw the momentum constantly shift, it was the team of Sheamus and Cesaro that finally came out on top, putting The Usos down for the count and ending their night with a staredown of their next opponents: The New Day.

Calling out for the Apex Predator and promising him some swift retribution for his recent sneak attacks, Jeff Hardy got more than he bargained for when Shinsuke Nakamura joined the fray and teed up the charismatic enigma for the Kinshasa. Orton continued the assault, dropping DDTs on Hardy and eventually throwing him onto the announce table where he decided to remove Hardy’s mystery by symbolically washing his face paint off.

With Andrade Almas in her corner, a distraction was inevitable as Lana’s fierce offense gave way to ringside shenanigans that saw Zelina Vega pick up pin and the win with a sneaky roll-up.

Lots of words. Lots and lots of words as this fight was purely verbal. Points to The Miz though, for ending the debate with a giant screen of crying baby faces.

It’s official! Charlotte Flair is going to Summerslam. When Carmella got overconfident and tried to end the main event with a Figure Eight on Charlotte, she quickly found herself on the receiving end of that move when the Queen reversed it and forced a submission victory from the champion.