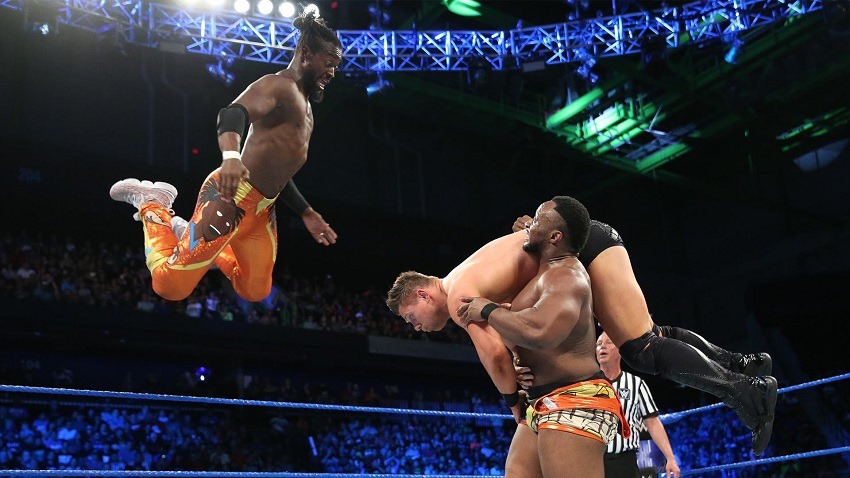 WWE Smackdown LIVE took place from he American Bank Center in Corpus Christi, Texas. Here’s all the action that went down last night.

Just who is the real Asuka? According to Smackdown LIVE Women’s champion Carmella, Asuka is a broken warrior after her Wrestlemania 34 loss to Charlotte Flair, revealing a weakness that everybody was ready for. The Empress of Tomorrow had a different idea however, as she descended to the ring. Before Asuka could lay into Carmella however, Mandy Rose and Sonya Deville decided to crash the party, claiming that Asuka would be no match for either of them in a rematch.

Asuka’s response? She’d be more than ready to take on both Deville and Rose, right then and there.

At first, it looked like Asuka may have bitten off more than she could chew. Deville and Rose kept each other fresh while Carmella provided distractions from ringside, but the Empress was having none of it. Busting out her trademark offense, Asuka powered through and trapped Rose in her dreaded submission lock, picking up a win via tapout.

The night wasn’t over yet for Asuka however, as she may have ducked a post-match beatdown from her challengers but she still fell to a vicious assault from Carmella as the numbers game proved to be too much for her.

A good brother versus a Bludgeon brother? That’s the match that kicked off as Karl Anderson and Harper provided a preview for their upcoming tag team championship match at Money In The Bank. Harper utterly dominated the bout, but a missed kick saw Anderson take advantage and roll Harper up for a surprise pin.

In mixed tag team action, the story in the ring was one of Lana and Naomi looking to put some fuel in their tanks ahead of their Money In The Bank ladder match. With Jimmy Uso and Aiden English providing support, the action was fast, furious and frantic as heavy blows were traded and slams left the ring shaking. Naomi and Jimmy eventually got the win, but not before tragedy struck the ring: Aiden English apparently damaged his golden voice, putting his uh…signature…song-skills in serious jeopardy.

It’s official: Last man standing match at Money In The Bank with the WWE Championship on the line. I hope Styles has a titanium cup in his pants for this bout.

Not every match is persona, but seeing two of the bestest pals around slug it out in the ring? That’s the match that was on offer, as Becky Lynch and Charlotte Flair stepped into the ring and left nothing behind. The win would eventually go to Becky Lynch, as she trapped Charlotte Flair in the Dis-Arm-Her and earned not only a huge win, but respect from the former champion as well.

Hey, it’s time for the annual nobody caaaaaares about this feud edition of Smackdown LIVE!

The New Day def. The Miz, Samoa Joe and Rusev

In massive tag team action, it was the power of positivity versus the A-Lister, Samoan Submission Machine and the Bulgarian Brute. The action definitely favoured the Miz and his allies, but their lack of teamwork resulted in all their progress being cast aside. When a stack of flapjacks missed the mark, The Miz suffered the full brunt of Rusev and Samoa Joe’s rage, leaving the former Intercontinental champion in a precarious position.

One Midnight Hour later, and victory went to the New Day.