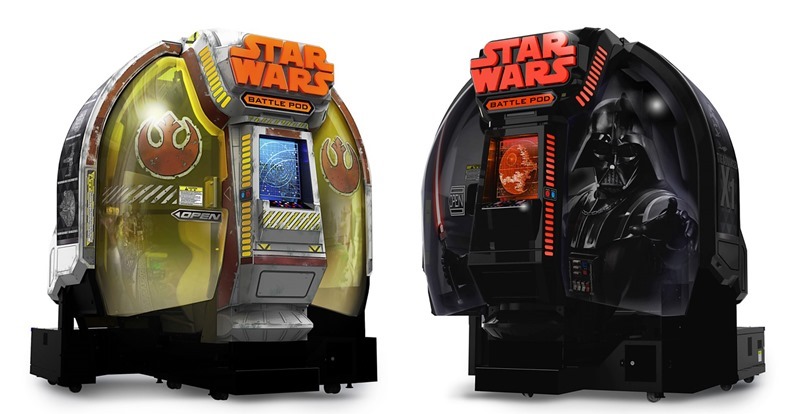 It’s been a while since Star Wars was in arcades. Almost as long as it took me to finally forget about Jar Jar Binks…dammit. Still, it’s great to see Star Wars alive and kicking. It’s even better to see it doing so with an arcade cabinet that features proper lights, sounds and a kickass visual system. And it’s a system that you can actually own. For close to $100 000.

Or $98 000 to be exact. According to a translation from Kotaku, that’s the exact amount you’ll need in order to buy one of these Star Wars branded arcade stands. The catch of course, being that you need to be in Japan. Added bonus: These particular battle pods are different from the usual $37 000 ones that you’d find in arcades. And I don’t mean that they’re not covered in all manner of juices, soft drink spillages and bodily fluids. Shine a UV light on one of those, and you’d have enough of a glow to blot out the sky.

No, what all those extra dollars get you is a pod that is designed to either look like a massive rebel trooper helmet (Not that helmet you perves) or Darth Vader’s infamous mask. Plus, you’ve got movable seats, exclusive carpeting, real leather on the seats and a trusty manual. And a massive saving in not having to throw tokens into this arcade unit the whole time.

Sounds worth it. Do I want this? Yeeeeeeeesss, yes I do. Especially after seeing it in action a few months ago.