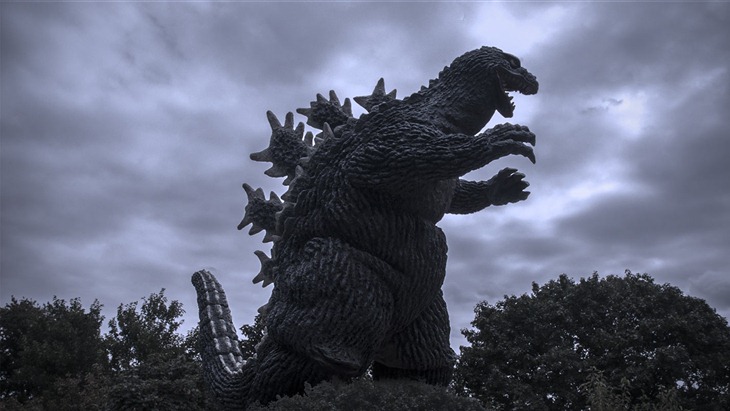 SKREEEEEEEEOOOOOOOONK! No, that’s not the sound of my breaks failing, it’s the sound of Godzilla roaring! When you think about it, Godzilla is perfect material for a video game. He’s big, mean and wants to level a city, something which GTA players can relate to. Over the years, ol’ Gojirra has been in plenty of video games. Most of them were terrible, but still! It’s worth a history lesson, innit?

The first big appearance of the King of Monsters happened way back in 1983, a decade best remembered for bad hair, bad clothing and telling the Ozone layer to go eat a dick. Released on the Commodore 64, the debut game of Godzilla had you controlling the Japanese military in a strategy title that attempted to stop a Kaiju rampage.

For some reason, Godzilla also looked like an angry version of Barney the Dinosaur who knew how to moonwalk.

In 1984, MSX players got Godzilla vs 3 Major Monsters, which had players facing down King Ghidora, Megalon and Kumonga. It was also shorter than Godzilla’s temper.

Fast forward a year to 1985, and Godzilla: Gojira-Kun had you playing as Godzooky for who knows why on the MSX.

In 1986, we got two more Godzilla games. And by that, I mean that the Kaiju King shared the spotlight in The Movie Monster Game, destroying cities alongside Mothra, the Blob and the Ghostbuster nemesis Stay-Puft Marshmallow Man. Yes, the 1980s were weird indeed.

The final Godzilla game of that weird and pointless decade was Godzilla: monster of Monsters. Released in 1988, this time players got the chance to tag team as Godzilla and Mothra in order to repel an invasion of Earth. It was 2D to the max, but holy Rhodan, did it feel like you really were controlling a scaly force of nature.

A new decade, a new Godzilla game! With the Gameboy proving to be a massive success, Godzilla emerged on that handheld console in 1990, in the aptly titled “Godzilla”. And yes, it was absolutely terrible, with looping music that would make you want to destroy Tokyo.

In 1991, players once again got to control the mini-snacks known as the Earth Defence Force, in a new strategy game on the NES called Godzilla 2: War of the Monsters. Mothra, Hedorah, Baragon aand King Ghidorah also showed up, because Godzilla is a social force of destruction.

Finally, 1993 heralded the kind of game that made you feel like an unpaid intern overheating inside a smelly rubber costume in Super Godzilla. An SNES game, it had players going one on one with various foes as he made his way through easily-demolished cities. It was rather neat back then, when we were more easily amused.

While SNES players were enjoying some living room action, arcade players got the chance to pump some quarters into a cabinet version of the iconic monster, controlling him ina  fighting game that was absolutely ridiculous. And by that, I mean nothing will ever beat the idea of Godzilla being able to power-slam King Ghidora in a manner that gives the laws of physics the atomic finger.

Also in 1993, Godzilla was back on the Gameboy in Kaiju Godzilla. And it was much, much better than the 1990 debut on that console. I mean like a hundred times better. I cannot emphasise this enough.

Man, Godzilla was busy in 1993. He had one final game that year, that went by the name of Godzilla: Battle Legends on the Turbo Duo, a console that I had no idea even existed. Here’s what it looked like in action:

What was particularly cool about this game however, is that Godzilla would morph into one of his nine various incarnations when faced with a particular foe, in order to be faithful to the source material. In the 1990s, such an idea wasn’t just unheard of, it was downright heresy in an era of cheap knock-offs and clones.

In 1994, Godzilla rocked up on the Super Famicom in Godzilla: Monster War. Another fighting game, players could choose to battle it out as one of eight Kaiju, with gameplay similar to Street Fighter 2 and the SNES Dragon Ball Z games. Also, until it got emulated, you’d have to import this game, as it was never localised for the West.

The next time that Gojira would be seen, would be in 1995 on the Sega Saturn. Utilising vintage footage of the early films for then cutting edge FMV technology (MOVING SQUARE MOVIES YOU GUYS!), Godzilla: Rettoushinkan had players once again assuming control of the EDF as they tried to minimise the fallout of having two massive Kaiju have a p-klap contest on their front lawn.

Godzilla: Giant Monster March popped up in 1995 as well for the Sega Game Gear. Clearly, Sega was loving them some Kaiju that year. Despite the cutesy graphics, Giant Monster March had some solid gameplay, provided that you brought around 133 AA batteries so that you could have more than one match on that resource-hungry handheld.

Kaiju fans would have to wait three more years for a dose of atomic age analogies, as Godzilla would resurface in 1998 for two more games. Godzilla: Trading Battle on the Sony PlayStation was a massive free for all that threw in dozens of monsters in some strange hybrid of strategy and card games. Again, a very, very weird game, but with some cool cinematics at least.

On the Dreamcast system, there was Godzilla Generations, which wasn’t a soapie believe it or not. Despite looking great, the Japanese exclusive wasn’t well received, with the city-destroying simulator being criticised for poor controls, camera angles and a lack of challenge.

A year later, a sequel would be released on the Dreamcast in the form of Godzilla Generations: Maximum Impact. And it how somehow managed to be even worse than the original game, which was scientifically thought to be impossible.

Arriving on the new Gamecube and Xbox consoles in 2002 and 2003 respectively, Godzilla: Destroy All Monsters Melee was the Kaiju-klapper game that fans had been waiting for. Beautifully destructive, well designed and just pure fun, this title started the new Millennium off with a bang and was well received by fans and critics.

And then Godzilla: Save the Earth arrived on Xbox and PlayStation 2 in 2004, taking the franchise back a few steps. The same idea as Destroy all Monsters Melee, this pseudo-sequel was a less polished version which added nothing new to the Big G, and instead felt like a rushed effort to rake in some extra cash. Which describes my cosplay attempt at creating a Mecha-Godzilla costume for a contest last year.

The home console versions were pretty much your standard Godzilla fighting games in the third dimension, with the added incentive of being the very worst attempts to make Godzilla popular since a cartoon series that invented his son Godzooky. It was pretty much the very worst Godzilla game ever made, despite having a ton of effort poured into it.

Actually, that’s a complete lie. The 2.5D version of Unleashed on the DS was even more catastrophically terrible, a game so bad, that it effectively did the impossible and killed Godzilla on video game systems.

Hopefully though, with a new film releasing today, we’ll finally see a big budget Godzilla game unveiled in the future. Or a Mothra game where the lead monster is voiced by Robert Smith from The Cure. Can we get Ubisoft working on that?