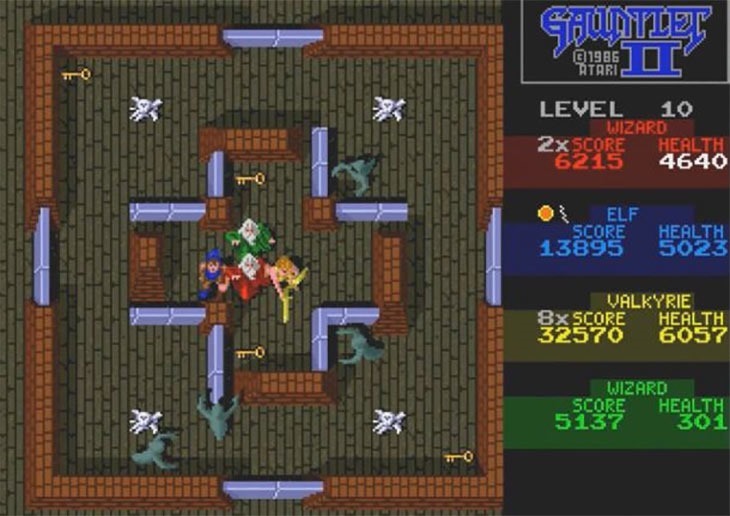 Back in the 80’s Atari released what was one of the very first multiplayer hack-and-slash fantasy games, essentially creating the template for games like Diablo. I, along with a group of friends spent many a 20c piece (yes, 20c) battling waves of skeletons, friggin’ spiders and miscellaneous otherworldly creatures. Well it’s back. Yes, Warner Bros (who swallowed Midway, who in turn swallowed Atari Games…who used to be owned by Warner in the first place) is bringing back the top down action hack-and-slash game that defined a genre.

Hmm. Other than the 4 player co-op, and the view it doesn’t seem very much like the Gauntlet of my memories, but I’ll give the game a chance when it’s released on Steam later this year..with full SteamOS support.

“With Gauntlet we combined the arcade style of the original game with an entirely new look and feature set that includes emergent, local and online four-player gameplay,” said David Haddad, Senior Vice President, Digital Games, Warner Bros. Interactive Entertainment in a press release I’ve taken the liberty of pasting right here.  “Gauntlet will be the first title in the WB Games Vault portfolio, which will provide us with an opportunity to access emerging talent within the game development community and match unique skills and experience with our extensive library of properties.”

“To us at Arrowhead, Gauntlet is one of the most defining games from our childhoods, and it’s amazing to be able to work with Warner Bros. Interactive Entertainment on a brand new version,” said Johan Pilestedt, CEO of Arrowhead Game Studios in the very same release.  “Gauntlet is one of the original and best known video game properties and we are looking forward to creating a fresh, yet true to the original, take on a multiplayer masterpiece.”

Ever play the original Gauntlet? Does this tickle your fancy at all – or is it yet another example of a company appropriating the name of a classic franchise to exploit gamers’ nostalgia? Either way, just be glad it’s not a free-to-play mobile game.

This (American) Summer, the video game community comes together for a season of breaking n…