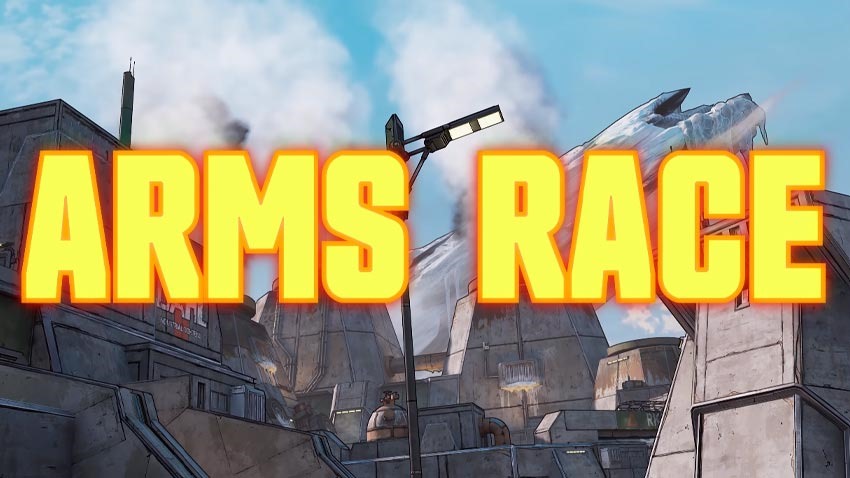 Borderlands 3 has just wrapped up its first season of content, but unlike previous games in the series, developer Gearbox is far from done with its loot ‘n shooter. No lengthy gap between sequels where nothing happens for this one save for Gearbox’s top brass being implicated in yet another scandal! The big new feature coming to Borderlands 3 is Arms Race, which basically turns it into a rogue-like game. And definitely not a battle royale, thank the non-refunding Marcus gun-gods.

The idea is simple enough: You’re plopped down into the Stormblind Complex, there’s a Murdercane ready to rip you apart if it catches up to you and you’ve been stripped of everything that makes your Vault Hunter special. No fancy guns you’ve earned from farming Eldritch monsters for rare loot drops, no skills that you’ve meticulously poured points into to create the perfect build.

Just the basics and whatever gun you can find before it’s too late. Kill, die, repeat until the end of time. Once you’re in the arena, the clock will start ticking down and you’ll need to hightail it to an extraction point with all your looted gear, eventually facing off against the Heavyweight Harker final boss. “The focus here is on gunplay, rewarding your ability to blast attackers while avoiding the Murdercane,” Gearbox explained.

You can resurrect any fallen co-op allies at designated respawn points, but if everyone in your party falls, your Arms Race run is over and any loot you failed to extract is gone forever. You’ve likely been ignoring white and blue rarity weapons for ages now, but in Arms Race, they could very well make the difference between a failed run and glorious triumph. If you’re lucky enough to find a Legendary, your chances of survival will certainly improve, but victory is never guaranteed.

I can’t say I’m too interested in the mode, but it’s encouraging to see just how consistent Gearbox has been with Borderlands 3 since it launched in 2019, pushing out a ton of content since it arrived. I’d still like a mode that allows the worst new character in the game, Ava, to be shoved into a cannon and launched into the nearest star.

The mode won’t be a freebie though. To access it, you’ll need to own either the ultimate version upgrade of Borderlands 3 or the latest season pass when they release on November 10.