Home Gaming Dota 2 vs League of Legends: Heroes and Champions 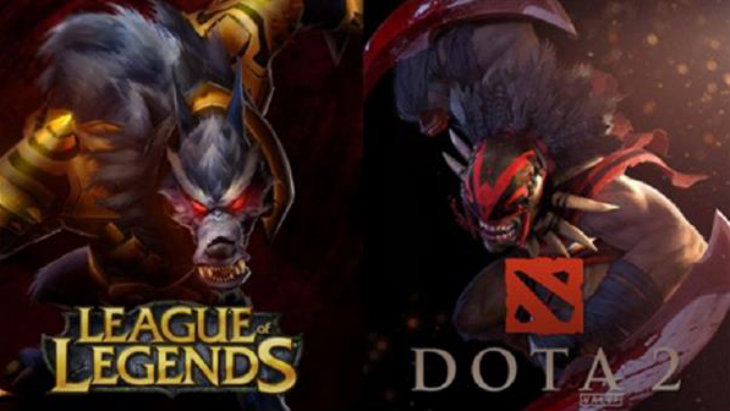 When it comes to these MOBA, one of the most important parts is which character you play as. Called Champions in League of Legends and Heroes in Dota 2, there are different approaches to design and release, as well as their various roles. Oh, and don’t forget the controversies about copying.

Across both games, Champions/Heroes are generally seen as falling into one of three general categories: Tank (who can give and receive plenty of damage), Support (who, um, support the other characters), and Carry (who deal a lot of damage per second (DPS) but can take a while to get to that point, hence needing to be carried towards the mid/end game). These can be further subdivided into Ganker (essentially an assassin who gets in and kills other characters), Pusher (the one who keeps “pushing” the lane forward and striving to take out towers), Jungler (who roams around the jungles, leveling up on other creatures and moving from lane to lane as needed) and Initiator (who “initiates” team fights, etc). of course there can be overlap in roles, so you may find the Ganker is generally the Initiator and might tend towards being a Carry. Supports, typically strong early game, might act as Tanks at time until other characters advance enough to take on that role.

LoL follows a unique approach to Champions. Each one is built for a specific role in the game – as explained before, the “meta” is incredibly important in LoL and players rarely deviate from the assumed roles of each Champion. However, with so many champions, there is a ton of variety.

In relation to roles, there are plenty of Champions to chose from who fill the various positions, and even overlap between roles. For example, Mordekaiser could be described as a tank thanks to his shield that replenishes when attacking, but some abilities are more magically oriented, so he could also be a mage/DPS Champion. Abilities are generally divided in Ability Power (AP) or Attack Damage (AD); AP scales magical abilities to damage or heal/buff while AD increases physical damage. AD damage is generally reduced by armor whereas AP damage is reduced by magic resist – this helps to further subdivide Champions into physical damage based or magical damage based. For the most part, Champions tend towards one or the other with a select few doing well in both. 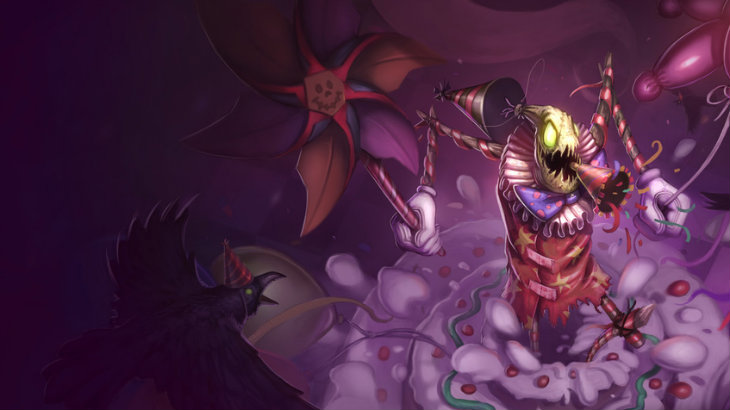 Aesthetically, each Champion has a variety of skins available. These change the look and feel of the champion, as well as some of their animations or sound effects. For example, Fiddlesticks goes from being a creepy scarecrow to an equally creepy party scarecrow, complete with party horn and confetti. Skins are released on a regular basis – often every week or so – and are available for purchase with real money. Champions are on a weekly rotation for free, but you can also buy them with game currency or real money so that you always have access to your favourite champions. New champions are released every few months to much fanfare and video teasing.

Thanks to the powers and timing of activated items in Dota 2, players have a bit more flexibility about how they use the different Heroes. While there are specific roles that some might tend towards with certain Heroes, they can more easily move from one play style to another and the professionals often make unusual (and wildly successful) choices in this regard.

Rather than using skins to change the aesthetic of Heroes, Dota 2 relies on items and gear. These can be player created and are available for purchase in the in-game shop, or can be received at random at the end of a match. While these can sometimes change the gameplay animations or even abilities, they are mostly there for design customization.

Heroes in Dota 2 are mostly remakes of their predecessors in Dota 1. Some names had to be changed, but for the most part they are the same characters. As such, it isn’t as much for a surprise when new Heroes are introduced – there are only five remaining Heroes from Dota 1 that need to make their debut in Dota 2, after which point we may see a new direction in the form of new characters. Heroes do not need to be purchased; following the initial training matches, Dota 2 players have access to all the Heroes. 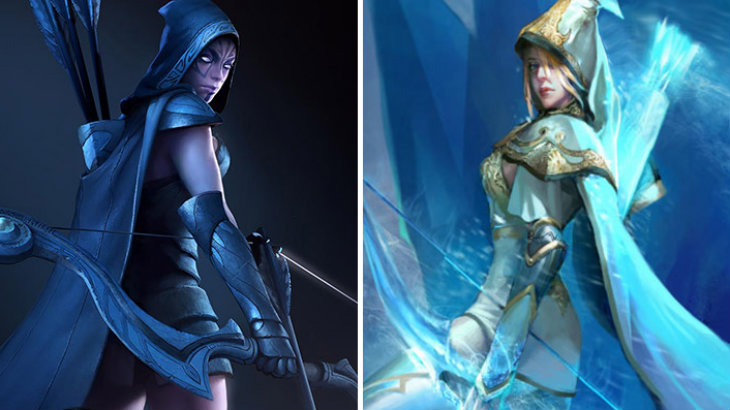 Dota was the first, and most instantly wildly popular MOBA. While mechanics and gameplay differ between the two, many people like to compare and say that LoL copied Dota when designing certain champions. One often cited example is that Ashe is a copy of the Drow Ranger. Now, the idea of an archer shooting ice-powered arrows isn’t exactly unique, however their designs are rather similar. That said, their actual abilities/skills are rather different. Other examples might be Urgot and Pudge or Corki and Gyrocopter. However, again, these rely on many character archetypes in gaming and all have rather varied gameplay mechanics.

There are many characters that are used as comparisons between the MOBA, however these rely on the roles more than the design per se. For example, two Jungler Carry characters would have more in common if their skills were vaguely similar, regardless of aesthetic differences.

In the end, it all comes down to player preferences. Personally, I hate playing as a Tank or Support and tend towards playing long-ranged Carry characters. I play a mean Tristana (I know, I’m the only one who likes her) or Miss Fortune, and I’m hoping to get good at Drow or Sniper. Who are your Champions/Heroes of choice? Do you tend to stay in your assigned role, or are you more of a renegade in that regard?