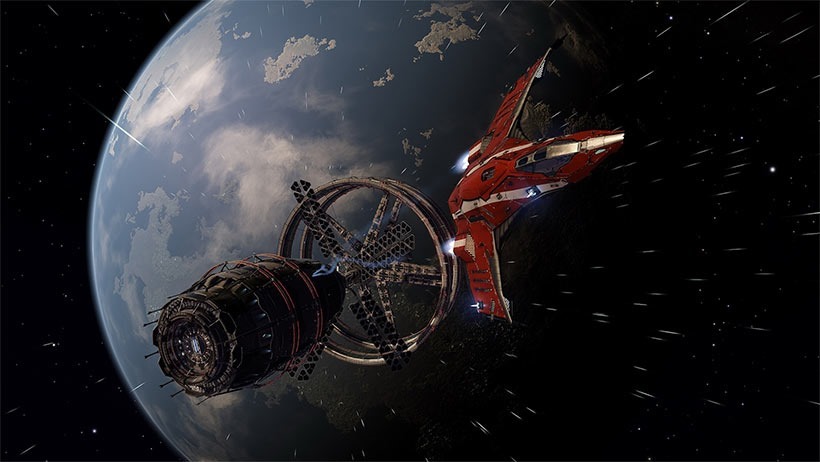 Elite: Dangerous, the great big expansive space sim has one notable advantage over Star Citizen: It’s actually out, playable for people who love the idea of flying through space right now. And soon, it’ll even have planetary landings, which comes as the first part of the newly announced Horizons season on expansion content.

Yes, you’ll soon be able to land on planets, and pilot a surface vehicle as you look for stuff on these new worlds.

Going down to the surfaces of planets was a key part of my dreams of exploration,” says Frontier’s David Braben “and soon we’ll realise that dream in Elite Dangerous.”

“We’re beginning with airless, rocky worlds – places where a great deal of new gameplay can take place. These are planet-sized sandbox environments, with all sorts of things to discover hidden on them. You’ll find surface starports, crashed ships, mineral deposits, hidden bases and more.

These worlds are gigantic, and – like the open galaxy – you’ll be able to go anywhere. You’ll be able to fly over the surface in low orbit and choose your spot to land, you’ll be able to venture out in your Surface Recon Vehicle and hurtle across the surface at high speed. You’ll be able to sneak around or go in all guns blazing. The nimble SRV is tiny compared to your ship, and is virtually invisible on a long range scanner – ship-based weapons will find it very hard to hold a lock on them, but airborne and ground-based players can explore the same worlds together, so watch the skies!”

It goes up for pre-order today. Here’s a trailer.

Elite Dangerous: Horizons launches this Holiday. The first expansion, Planetary Landings introduces players to planet surfaces and the first all-new Surface Recon Vehicle (SRV) the ‘Scarab’. Scanning airless planets and moons brings new gameplay as players detect signals, crashed ships, mineral deposits, outposts and fortresses. Alone or with friends players will explore, mine and engage hostile forces as they attempt to infiltrate strongholds guarding valuable rewards. Players will explore new worlds, coasting over mountaintops, diving into canyons, landing on the surface and rolling out onto the surface in your SRV, all without loading times or breaks in gameplay.