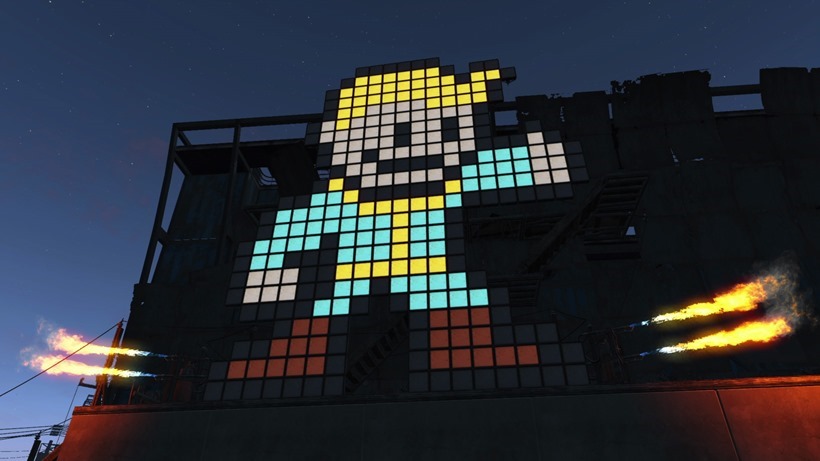 Even though it took a while for Bethesda to confirm it, we pretty much knew what Fallout 4 was all about before its reveal. Mutants, laser weapons and nuclear explosions, Fallout has a distinct heritage and, since Fallout 3, a pretty discernible gameplay pattern. At E3 though, that was shaken up by the unveiling of a brand new base-building mechanic. And it’s one that is far more robust than initially thought.

Base building, at its core, isn’t exactly new to Bethesda. They dabbled with the idea in Skyrim – letting players purchase houses and restrictively add their own flair to it. Bethesda Marketing VP, Pete Hines, says that Fallout 4 uses that as a core, giving players only predetermined areas within which to build. But apart from that, building in Fallout 4 is less like Skyrim and a lot more like Minecraft.

“[In Fallout 4] it’s, ‘Now I’m building it, I’m actually building the house, I’m building the wall, I’m placing the door, I made the table, I made the mattress.’ It’s that sense of making your own way in the world and defining, ‘Who am I and where do I live and what’s my story in this world?'”

Within these areas, players are virtually left to their own devices. Want to build a structure that kisses the skyline? Go ahead. Want to recreate a famous ship or landmark from your favourite sci-fi film or pop-culture reference? You can do that too. Much like Minecraft, base building in Fallout 4 is going to be a very personal experience – and own left up to the imagination.

“Much like a game like Minecraft, you can be a noob and just build a simple little thing. And you can also get the guys who go crazy and [can say], ‘I rebuilt the spaceship from this game… [or] I rebuilt the Tardis from Doctor Who using the lights and stuff and it looks exactly like it.’ Like, holy s**t that’s incredible.”

Of course, you could still play the entirety of Fallout 4 and not focus on this element at all, but it is a feature that I think will help extend the game’s lifespan well into the years ahead. It’s not connected online like Minecraft or Rust (another game with a similar structure), but I wouldn’t count anything out with full mod support.