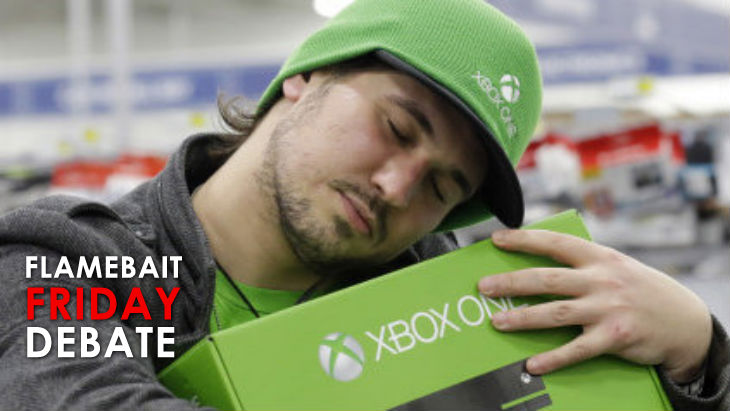 On this day of commercially designated romance, we’re meant to celebrate our love for that special someone. I don’t celebrate it, but Darryn will spend the day rubbing chocolate all over his left hand. So what about our gaming platforms? Do you stick to just one, or are you a true, um, “player”?

I must say that I am loose with affection when it comes to gaming platforms. With a PS3, Xbox 360, Wii U (not to mention Wii and PS2 packed away somewhere), PC gaming rig (my husband’s but I have “full access”), Mac, 3DSXL and now iPad, I’m rather spoiled for choice in gaming. Wow, I just realized how much I get around.

That said, I am rather monogamous when it comes to particular genres. Mac and PC are for FPS and MMOs, while PS3 and Xbox 360 are for RPGs. While I used to prefer JRPGs on PS3, I have transitioned into liking the Xbox 360 more – if I’m going to play games for that many hours, I’d rather hold a really comfy controller.

Considering I only have two HDMI ports, it’s clear that my love of the Wii U isn’t really practical – it spends most of its time unplugged from the TV. The PS3 still has seniority over the Xbox, mostly because it’s the best media server and works for TV entertainment as well as gaming – that thing never gets unplugged from my TV. Do you have a port for every console you love, or are some left high and dry?

So, are you monogamous with one gaming platform, or do you get around? Are you platform agnostic across all genres, or are some games meant to be played on PC or console?