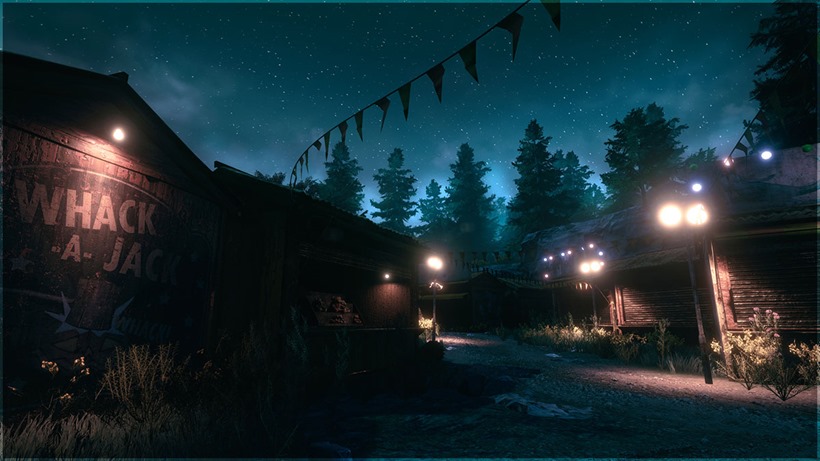 I love horror games! The tension… mmmmm! The jump scares… delicious! The heart palpitations… yum! Also, I’m lying, in case you somehow thought otherwise. I tend to steer clear of horror games because, well, I’m kind of a wuss. The Park is another title I guess I’ll have to avoid like the plague. It’s a horror game set in a nice and creepy amusement park, set for release in October.

Here’s the premise for the title  (via Destructoid):

Amusement parks are happy places, filled with the innocent joys of childhood and the exhilarating rush of hair-raising, but safe adventure. Balloons, cotton candy and fantastic rides to be dared.

That doesn’t sound so bad! Wait, that was just the first part…

Perhaps that is how Lorraine pictured it too when she brought her son Callum to one… just before it descended into the most terrifying nightmare of her life.

Ok that still doesn’t sound so bad. Maybe this trailer will shed more light on the horrors waiting to be found in the park itself. Be warned, if you suffer from epilepsy, avoid this video at all costs!

‘The Park’ puts you in the shoes of a mother whose son goes missing. When night falls and the lights go out, what follows is a short, but intense horror story set against the backdrop of an amusement park where a dark and sinister secret is just waiting to be uncovered.

Well, the video didn’t really show any of this. What sort of horrors will Lorraine have to face? I guess we’ll have to wait till October to find out. In the meantime, it looks like the worst she has to overcome is a really fast rollercoaster. EEEK! It’s coming from Secret World Developers Funcom, and is set in the same universe. Hmm.

On a side note, the first person to suggest I play this will win themselves a free entry into Gold Reef City. This lucky winner will also have themselves tied to the bottom of the tracks of the Tower of Terror. Enter at your own risk! Also, please don’t make me play this game. NO GOD PLEASE NO!