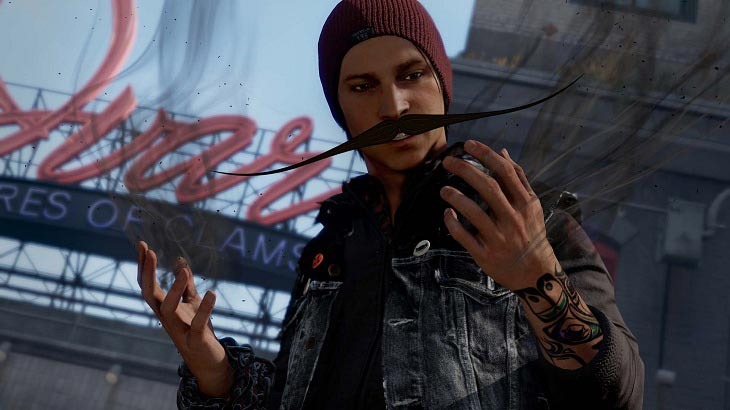 I don’t know about you, but even when I’m the good guy in a video game, I still dig being the bad guy instead. Thanks to games wanting to promote different choices, it’s easier than ever to go renegade and wear a black hat. And inFamous: Second Son packs plenty of karma that won’t just affect you, but everyone around you as well.

In a fan Q and A session, inFamous: Second Son producer Brian Fleming spoke about the karmic system of the game, and how it would impact on Delsin and the world around him.

“The most interesting thing about inFamous: Second Son is that you’ll be making decisions about the trajectories of some of the other characters,” Fleming wrote on the PS Blog EU. “Which is a different take on it.

But ultimately, the most important changes aren’t narrative ones. There’ve been systems added to really foster different play styles, and that’s the thing that’s going to be the most enjoyable aspect of your second playthrough.

Having a whatevs attitude or being a saint means that your appearance is going to change as the game continues. When quizzed on this, Fleming added “Yes, a lot of the things that players expect — like the changes in the character and the changes in the powers — are present”.

They all relate and feedback to the karma systems. So you’ll have vastly different visuals and powers depending on which way you’re playing.

As for game length, Fleming was coy on that subject. “We’ve already established the size and shape of the inFAMOUS experience, and Second Son is very much an inFAMOUS game,” Fleming explained.

We understand what we’re trying to accomplish there in terms of scale. Certainly the world is dramatically more detailed than ever before, and our focus was on improving the quality of every interaction. What we’ve tried to do is take the inFAMOUS experience that you know and love and “next-gen” the entire thing on every level.

So hopefully a good dozen or so hours, with more dedicated to side-missions and exploring. inFamous: Second Son rocks up next week on PlayStation 4. You’ll know that I’m playing the game when you glance at my recent trophies and notice that I’ve unlocked all the rare ones for being a complete dick in the game.