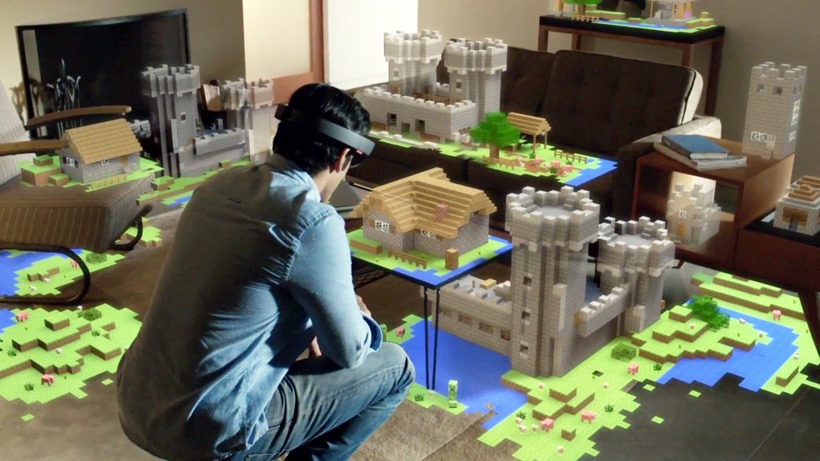 Microsoft’s augmented-reality headset, HoloLens, was a particularly bright highlight of my E3 experience last month. A short, 10-minute demo was more than enough to convince me of the leap forward this headset is taking our interactions with digital bits and bobs, but it also made clear some of the many limitations the headset has. Limitations that Microsoft is no longer trying to hide.

After the Minecraft HoloLens demo during Microsoft’s E3 conference, it’s safe to say everyone was rather impressed. Thing is, seeing an entire Minecraft world on your table is a bit of a white lie, since HoloLens has a much smaller, rectangular field of view. It’s a little tricky to describe without seeing it, but thankfully Microsoft isn’t too keen on lying about it in promotional videos anymore.

It’s not so much that all those Minecraft demos were a lie, but more the case of not being able to see the entirety of the scene with the headset on. Since holographic objects are existing in your own personal space, they’re still technically there – just waiting for you to turn your head and look at them. It’s almost like saying that psychotic clown standing behind you isn’t there just because you can’t see him.

The video also hits home something that really needs to be understood about HoloLens: it’s not a gaming device. Sure it’s going to support games and some gaming experiences, but Microsoft’ isn’t building this as a competitor to the Rift or Sony’s Morpheus. They believe in HoloLens as a platform for digital interaction in thousands of fields, with medical being a quick, easy example.

And that’s actually a good thing, because it means the company will probably pump a lot more money and faith into the headset than the did the rather limiting Kinect. If Microsoft truly want to make HoloLens a viable headset, they’ll need to improve on what they’ve shown rather than cut back. And right now, I’m a true believer in the device in its current state, while holding a lot of hope for what it can become in the future.