Tomorrow is Thanksgiving over in the US of A. You know, the day we eat turkey and stuffing, gather with family and talk about all the things we’re thankful for before going out the next day to punch an old woman in the throat for that good deal on a new TV. So, here’s a twist – what are you thankful for from this year? 2016 was a real sucker punch of a year, but some awesome things happened, too. Right?

In Other News: LEGO is coming for your Nintendo Switch, Blizzard is keeping this perspective and we can always do more.

Here’s the news we didn’t post today because we were too busy avoiding giving Al any more sick burns.

Majora’s Mask Fan Film Created By VFX Studio
A Boba Fett Star Wars Movie Was Very Close to Being Announced – Report
Overwatch was Blizzard’s first first-person action game, but this job ad suggests it won’t be the last
The game industry could be doing more for charity, says Democracy 3 dev

The War Within – Highlights

Pray to SILENCE in this first trailer for Martin Scorsese’s long-awaited passion project!
Video review: True Memoirs of an International Assassin
Midweek Movie Mouth-off: what movie did you just not “get”?
The future of STAR WARS movies may lie in anthologies, not episodes 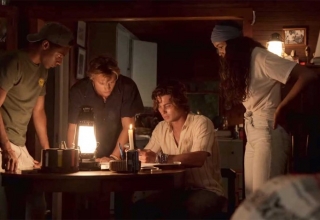 Outer Banks is a coming of age story that follows a tight-knit group of local teens (the “Pogues”) in the beach vacation destination of the Outer Banks of North Carolina. When a hurricane kills the power for the summer season, it sets off a chain of illicit events that force the friends to make life-altering decisions. The search for their ringleader’s missing father, forbidden romances, a high-stakes treasure hunt, and the escalating conflict between the Pogues and their rivals turn their summer into one filled with mystery and adventure they’ll never forget.