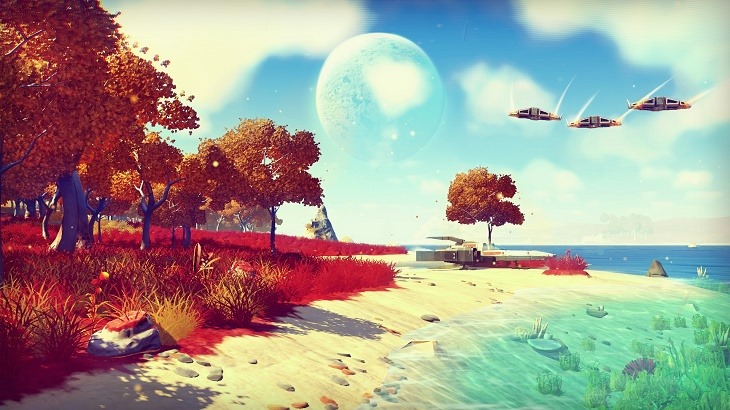 No Man’s Sky was a massive crowd pleaser when it was revealed during the VGX awards last year. It was an even bigger hit at E3 this year, and easily one of the highlights during Sony’s press conference. Now, we have a better idea of when to expect it.

If you’re still hoping to get your hands on the procedurally generated sci-fi MMO this year, then you’re probably going to have a bad day. No Man’s Sky hasn’t really locked down a release date yet, but we know for certain that it will come out sometime in 2015 on PS4. So far no other platforms have been announced, although Hello Games alluded to a PC version after E3. That’s still up in the air though, and the game could end up being a PS4 exclusive, at least at launch.

If you’re completely confused and still have no idea what No Man’s Sky is, here’s a quick recap. No Man’s Sky is about exploration. You’re given a ship and a massive, randomly generated open-world to get lost in. You can land on planets, explore the local wildlife and then just jet off to a nearby moon.

Your game is connected to thousands of other players, which brings in the whole MMO aspect. Hello Games have said though that while you will have other players flying around in your universe, you may never meet them. Planets are so large that millions of players could be on the same one and never run into each other. Your ship has weapons equipped to deal with threats, but these seem to be more environmental than player focused.

Still confused? That’s fine, because the game is a little bit of a mission to grasp., That’s probably because it just feels like a breath of fresh air, something unique and interesting to look forward to that doesn’t involve running and gunning. Check out some of the gameplay below if you’re just mildly interested now.

Trust me, this is a game to keeps your eyes glued to.