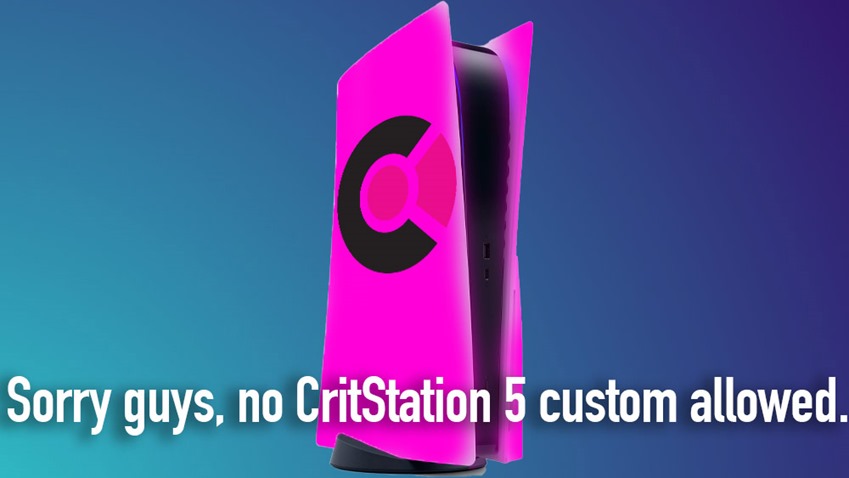 At first I hated the style of the PlayStation 5 console, which looked like it was ready to challenge a few high school kids to a magical game of cards. Possibly on motorcycles even. As the weeks went on, I slowly started warming up to the unusual shape that Sony had put together for the next-gen device, which was necessary due to the gigantic cooling systems within so that this latest era of gaming could avoid deafening players with an engine that sounds like hate-sex between elephants.

Some people like the shape of the console, but they reckon those plates that cover the device would pop beautifully in another shade of colour. One website that wanted to cash in on the PS5 hype was Customize My Plates AKA PlateStation 5, I crap thee not. The company had set up preorders for a variety of primary colour plates, and I’ll admit that the royal red they had on the site was dead sexy.

Sony has unleashed its lawyers on the site though, claiming that the fellas behind the startup were infringing on the company’s trademarks. “Sony’s lawyers told us it was their opinion [that] Sony’s intellectual property extended to the faceplates, and that if we continued to sell and distribute them in any country, we would end up in court,” A site representative said to VGC.

Customize My Plates will instead offer vinyl wraps for the PlayStation 5 console and its controller, a cosmetic option that usually resembles something out of the skins library of llama-ass whipping program WinAmp. That being said, it should be easy enough to customise those plates yourself if you’re feeling adventurous. They can be popped off without any tools necessary, and a can of Rustoleum spraypaint with a built-in primer means that you can add a few coats of your favourite colour easily to the covers. Yes, I can feel your hateful glare right now through my screen.

It’s officially next-gen month, and the wait to get your hands on these console is about to get a whole lot shorter. Next week sees the launch of the Xbox Series X and Series S, and a week later you’ll be able to grab the PS5 as well. Happy days are ahead!