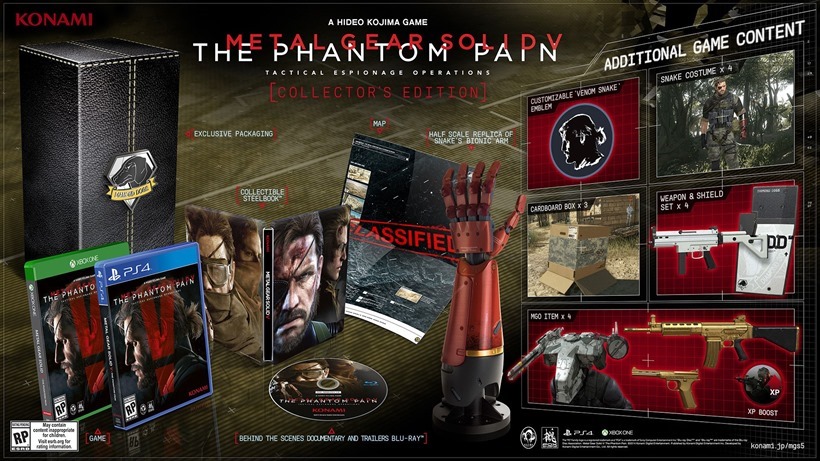 Metal Gear Solid V is just four days away now, and I can almost taste the hot rob read prosthetic arm of Big Boss. In a completely imaginary way too, because of those lucky enough to snag the Collector’s Edition for the game will be able to actually taste the 1:1 replica arm if they really want to. The Metal Gear Solid V Collector’s Edition is the most complete version of the game – or at least it is on one console.

A report on Reddit claims that all the DLC codes meant to come with the CE on PS4 are, for some reason, missing in the box. A team doing an unboxing of the edition found this out he hard way, quickly contacting Konami for clarification. Konami is claiming that this was a production error, and that all codes will now be sent to individual retailers to send out to customers. Another Redditor confirmed that Amazon would be doing this, suggesting that all copies of the CE have been compromised.

Oddly enough, the Xbox One version is not effected by this in any way – with the physical pamphlet codes coming packed in the entire bundle.

The Collector’s Edition is meant to include the following exclusive DLC (including the Day-One pre-order DLC):

It’s not a major issue if Konami is diligent about sending codes to every single retailer selling the Collector’s Edition, but it is a bit of a mess if you do fork out more for the exclusive edition and end up getting a little less than you bargained for. It’s all fine to say that it’s not the reason you bought the Collector’s Edition in the first place, but at the end of the day you paid for it. And so you deserve what you paid for, right?