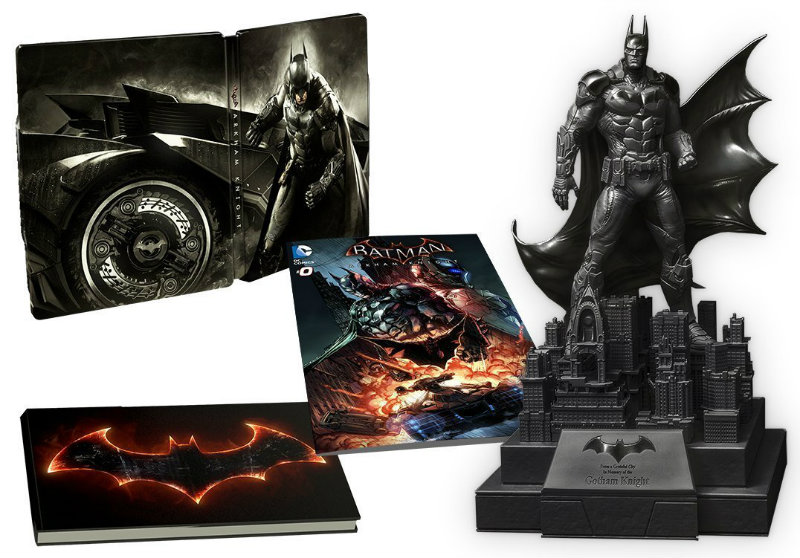 Normally, Batman: Arkham Knight posts are written by Darryn. However, he is unwilling to expose himself to potential spoilers which is why these words aren’t written by him. If you feel the same about possible spoilers for the game, please stop reading now and don’t click further. If, however, you’re curious about how a Limited Edition statue could spoil the game, follow me.

Pictured above is the beautiful Limited Edition statue for Batman: Arkham Knight, available now on Amazon UK. However, if you look closely, it has a message that reads:

From a Grateful City In Memory of the Gotham Knight

Even the Amazon description refers to the collectible as “an imposing Batman memorial statue commemorating Gotham’s protector, the Dark Knight.”

Does this mean that the Dark Knight dies in Batman: Arkham Knight? Or at least, does he pretend to die? Generally, Batman is only killed in alternate universes, or sent back in time by Darkseid. Then again, Neil Gaiman did his “What ever happened to the Caped Crusader?” comic that featured Batman’s wake during which time each villain in his gallery claimed to have killed him in incompatible ways, giving us no real resolution about how he died – perhaps one of those stories will be used in Arkham Knight. That said, Darryn is convinced that the Arkham Knight could actually just be a splintered part of Bruce Wayne’s brain – he doesn’t exist and Batman is just fighting himself. Perhaps this could lead to a full on breakdown that sends him into early retirement/premature death. This could then set the scene for the Frank Miller version of The Dark Knight Returns, or even go down a Batman Beyond route depending on where the game developers want to take us. Either way, this could be exciting for fans of the Caped Crusader.

Really, we know nothing at this point except that if there’s a memorial, there will probably be a death or at least a disappearance. We will only know more when the game releases in June of this year. Until then, all we can do is speculate.