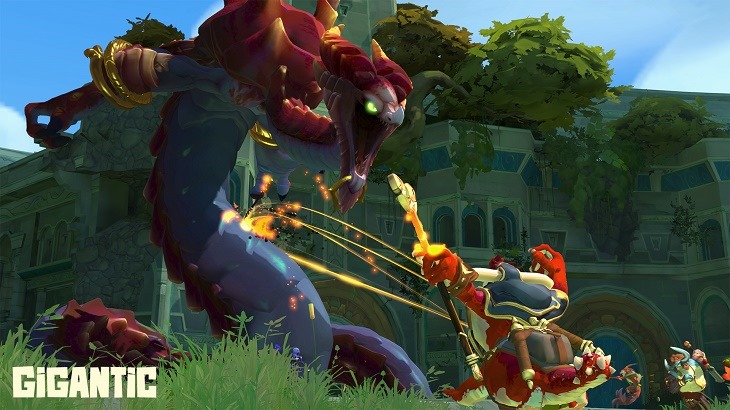 Everyone is jumping onto the MOBA bandwagon. Just the other day Gearbox, the studio behind Borderlands, revealed that they were going to try their hand at the popular online format, adding their names to a growing roster of developers wanting in on the MOBA money. It’s easy for lots of these titles to slip through the cracks and go unnoticed. Although, it’s much more difficult when your game looks as stunning as this.

Gigantic is a new third-person MOBA that doesn’t actually look like one. The game seems to have all the MOBA elements there; a five man team, one single objective and a varying roster of characters. Most of the time MOBA’s involve two teams battling each until one of the teams destroys the big, almighty structure/ancient/nexus in the other teams base/home/sanctuary. The variations differ more in the way the game actually plays rather than the rules, but Gigantic is tweaking that a little bit.

There’s still a singular structure, or in this case Guardian, that the enemy has to destroy. The difference is that in Gigantic this Guardian is a living, thinking character that moves around the map. This means that Gigantic is no longer about defence, but rather offense. Your five man team might fights alongside your Guardian, playing to your different character strengths as well as the strengths of the creature you’re protecting. It’s an interesting twist, and one that makes Gigantic stand out from the rest of the crowd.

That, and the game has an absolutely gorgeous art direction. It’s all on show in the revel trailer below, with the game being released sometime next year. Gigantic also has some big names behind it, with StarCraft and Guild Wars lead designer James Phinney heading up the independent studio behind the title.

You can sign-up for Alpha access here if you’re ready for yet another MOBA in your life. Personally, I’d play it just to see all the pretty art. This type of stylisation really speaks to me.