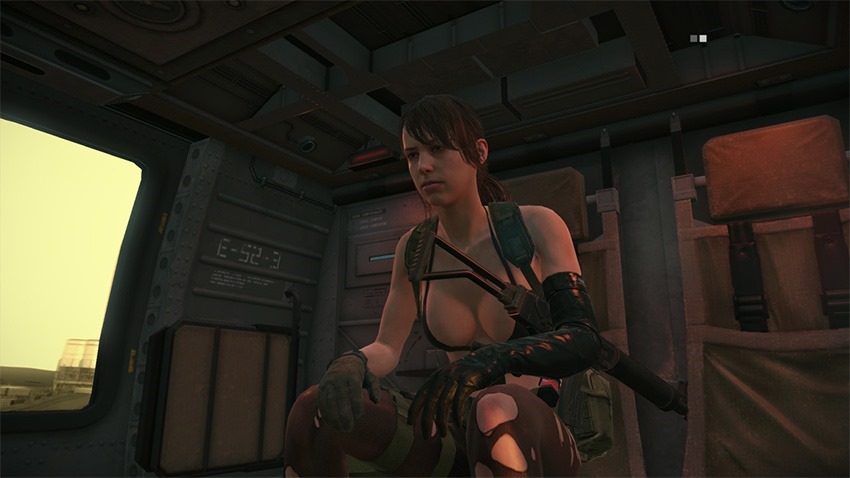 Metal Gear Solid V was a very good game, right up until it wasn’t. I know I say that a lot, but I really enjoyed sneaking my way around Afghanistan and the Angola-Zaire border region. And then I finished Chapter 1, and realised what an absolute load of wank the whole story was – especially given that it didn’t really come to a satisfying conclusion.

Anyway, after a year of inactivity with MGS V, Konami’s released a stealthy patch that let’s you play the game’s multiplayer component as Quiet. If you’ve forgotten, Quiet is the mute, scantily clad sniper you work with as a mission companion. She’s fast, seems to move using magic, and nails a mean headshot – things you can now do while protecting your FOB and invading others’.

She’s still wearing skimpy clothing, with no option to change it (even though you could give her other clothing in the main game). While I have nothing against half naked women, even in games, I feel like the minor storm that accompanied Quiet’s reveal was mostly justified. Nobody would really dress like that as a sniper, nor would they wear so little as an active participant in war or espionage. I even remember Kojima himself calling out those who questioned her clothing and said it was there purely for male gaze. He said “…once you recognize the secret reason for her exposure, you will feel ashamed of your words & deeds.”

When I found out why she just had to be so skimpily dressed, I proper laughed out loud. She barely wears clothing because she breathes through her skin, using photosynthesis to absorb air, water, and nutrients. It’s silly, and laughable, and barely justification. I mean, if you want to have a semi-naked super sniper woman in your game, then say so; the convoluted justification was completely convoluted hogwash.