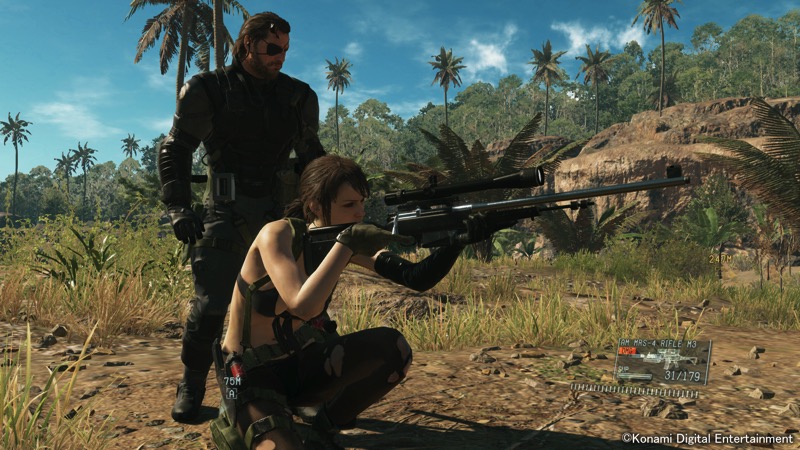 Last week media outlets from all corners of seemingly just the northern hemisphere (I’m still sulking) made their way to Konami HQ to get their hands all over The Phantom Pain. Their impressions are still embargoed until next month, but that didn’t stop some over eager journalists to tweet out their thoughts every few seconds. Tweets which revealed a surprisingly hefty amount of new information about the game.

Antonio Fucito from the Italian site multiplayer.it got his fingers sweaty at the event, sending out a ton of information into the Twitterverse based on his ten-hour experience with the upcoming tactical stealth title. Despite being three months away, Fucito pointed out that the code he played seemed extremely final – probably only requiring some minor polish in the months to come.

I played MGSV on PS4, the code looked quite polished and basically final. I wonder what they’ll do in these three months.

One of the most interesting additions to Phantom Pain is Mother Base – your central node of all operations. You’ll be travelling to and from here between missions, but you won’t have to make the great helicopter trek back if there’s still more to do on the map you’re currently exploring. This is open-world after all, with no loading times while you’re on a massive open patch of desert.

When the mission begins, it’s set like a movie, with the cast, the main protagonists and its guest stars. Besides accessing them with the helicopter from Mother base, it’s possible to stay on the map and tackles missions one after another.

The Afghan map seems definitely big. It’s divided in sectors, but you can explore it all without loading times. On the road to the objective there are other outposts, maybe you can conquer them to control them and get materials. Those are useful for the enormous quantity of personalization options and power-ups included in the game.

Hideo Kojima has been extremely vocal about letting players experience The Phantom Pain any way they please. Sticking to the shadows or going in guns blazing are both viable – but stealth is still inherently emphasised. Going in any other way might get you some extremely unwanted attention.

There are various ways to approach. I did some parts in full stealth, some while fighting, but that’s harder. Playing stealthily is much more satisfying, because you can explore, hit targets and recover items in a much cleaner version.

After I killed almost everyone, I retrieved the missile launcher and I called the helicopter, but as soon as I came out it was foggy and the “Skulls” appeared. They’re very hard enemies, some of which I could kill only with the rocket launcher.

Enemies you can only take down with an RPG? Yeah, I think I’ll be sticking to crawling, tranquilliser darts and whistling in victims to my black widow choke hold. Metal Gear Solid V: The Phantom Pain is out this September – and I’m treating it as the last in the series of genre defining titles. Make your farewell great Kojima.