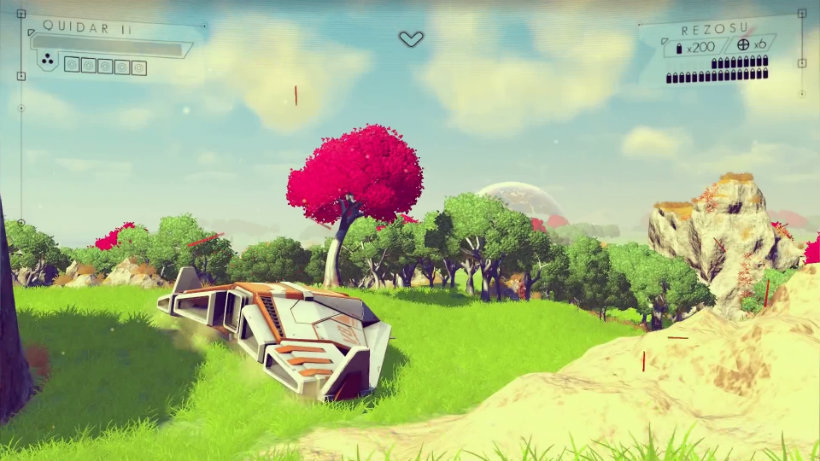 At E3, they like to make journalists feel special by giving a select few of us some behind-closed-doors demos of games. Of course, as the weeks go by afterwards, they release these demos on the world via YouTube. Normally, we know it’s all scripted or fairly predictable, so it’s not a big surprise to see the exact same footage again. No Man’s Sky is a bit more surprising.

IGN has secured a month of exclusive content with No Man’s Sky. After choking on my jealousy, I watched their first video – 18 uninterrupted minutes of No Man’s Sky. Here it is:

This is a planet that was shown to us during E3. It’s clear that they selected it because it’s fairly pretty and predictable and it allows Sean Murray to show off a variety of features of the game. I can’t blame him for reusing the same planet when he knows what he wants to show and other planets might not afford him the same opportunities. Still, everything right down to the goat attack leading to a raised alert level happened during the behind-closed-doors session. Then again, in my session he lasted a bit longer and I got to see an AT-AT sentinel appear. Spoiler: they’re badass. Thereafter, the demo takes a new turn as he explores another moon/planet.

At least now you can all see what I tried to describe to you in my hands-off preview. It still blows my mind the sheer scale of the game. When Murray zooms out into the galactic map and shows just how many points of light there are, all of which are solar systems with their own planets, moons and other points of interest, it is simply staggering.

I’m still convinced that I will be a non-aggressive player, traveling the universe exploring. It’s actually strange for me to think that other people would choose to play as pirates or attackers in general – why would you want to destroy the universe? Then again, I don’t understand how Darryn managed to play as a Renegade in Mass Effect.