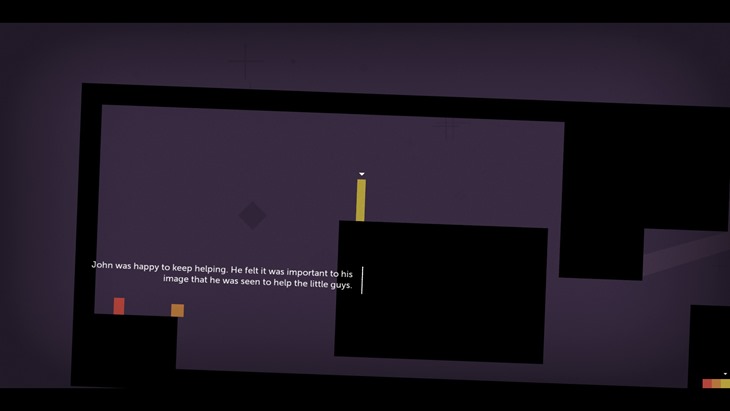 I don’t think I had ever touched an indie game until I received a bundle of them from a friend. There were gems like Hotline Miami, Limbo, and Thomas Was Alone. It was an incredibly refreshing experience, something I honestly never expected. Thomas Was Alone in particular really drew me in, giving blocks more personality than most characters I’ve played as in other games. It’s now available on mobile platforms.

If you’ve never played it before, the concept is simple. You take control of Thomas, a little red block packed with personality. He never speaks, but he is given life by the narrator who is voiced beautifully by Danny Wallace. Thomas meets various other block characters on the way, all with their own unique personalities as well as abilities.

The goal of each level is to place the relevant sized block in the exit that is shaped to fit them. This opens up the platforming aspect of the game. You need to think about how each block works, then use them to help each other reach where they need to be. The game wasn’t too difficult in my opinion (for the most part), but it wasn’t the platforming that drew me in. It was the narrative, and the awesome music that accompanied it.

It’s something that will fit mobile perfectly as the levels are bite sized. If you haven’t tried it out, I really think you should! The mobile version will also come with Benjamin’s Flight DLC pack, which consists of an extra 20 levels of blocky goodness.

Thomas Was Alone is available on iOS and Android for R49.99, and from what I understand, that low price will only last until the end of today.