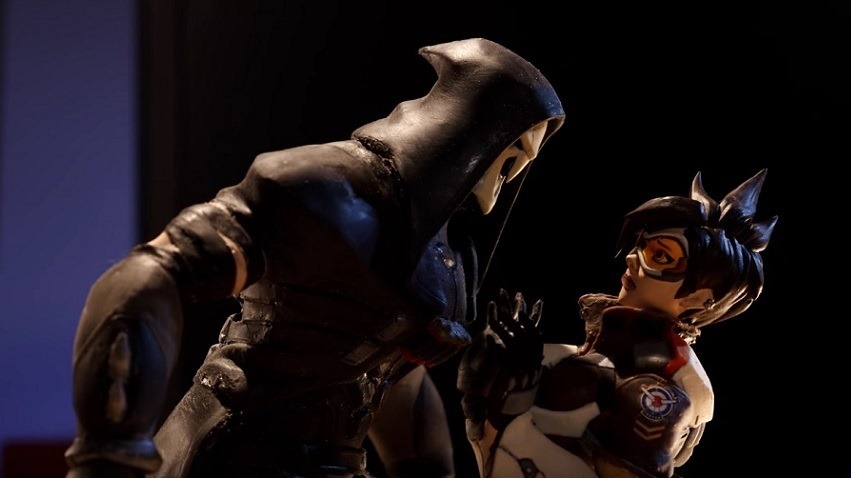 If you know anything about animation, you’ll recognise the painstaking work that goes into stop-motion films. Even short ones require a ridiculous amount of time to produce well, with small fine movements being captured with thousands of photographs over and over again to produce a smooth looking final product. So while this new Overwatch short lacks the flash and fair of Blizzard’s signature CGI productions, I admire it for its effort. It’s also just ridiculously cute.

Celebrating the game’s anniversary, Blizzard has released a short stop-motion film starring two of the game’s most popular faces: The cheers luv Tracer and die die die Reaper. Tracer comes to life from her gorgeous statue (that I regret every day not buying) and attempts to bake a cake for Blizzard and company. Reaper is just there to be his brooding, skull-faced self, but his shotguns are pretty great at lighting candles. It’s all too adorable.

If you’re into looking at how these productions are made though, there’s a separate breakdown showing the process behind the entire production. You’ll also get to see a Soldier 76 come to life, who didn’t make it into this video specifically. I’m all for more stop-motion videos like this, but understand that it might not be the forgiving pipeline that the CGI productions are.

Overwatch is still steaming ahead with its content, with a whole host of new skins coming to the game as part of its anniversary celebrations. Blizzard also managed to gather more than $10 million from its Pink Mercy skin, with all the proceeds heading to breast cancer research and raising awareness. Blizzard has hit gold here, and they aren’t planning to stop soon.