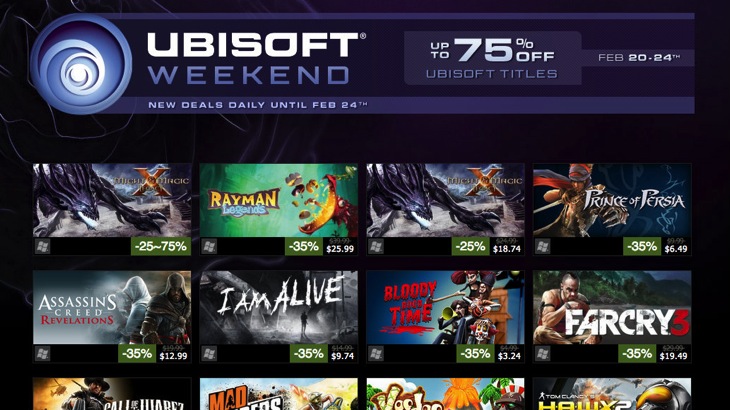 Steam Sales are always after your money. Awesome games at bargain prices, who can say no? Now, these prices aren’t quiet comparable to the ones you saw in December, but some of them are pretty good.

The games are up to 75% off, although most of the titles are sitting at about 35% off. Still, not too bad. With most of the Ubisoft catalogue on sale, you can pick up Prince of Persia for $6.49 or join me in spending the same amount for Beyond Good and Evil – I’ve got to find some way of showing my support for that game and reminding Ubisoft that I’m still waiting for a sequel.

Each of the older Assassin’s Creed games are going for about $13, except the horrible Assassin’s Creed III which is on sale for $19.49. Honestly, I’ll probably just end up buying Settlers or Heroes of Might and Magic. Those games have such special places in my heart.

However, all of you who didn’t do so during the Steam Sale in December should pick up Far Cry 3: Blood Dragon just to make Darryn happy. He loved that game far too much, and it sounds like a pure romp of awesomeness. Sort of like The Expendables video game that’s also on sale.

The Ubisoft sale runs until 24 February, with new deals added every day. If you’ve been waiting for prices to drop to grab some of your favorite Ubi titles, now is the time to shop.