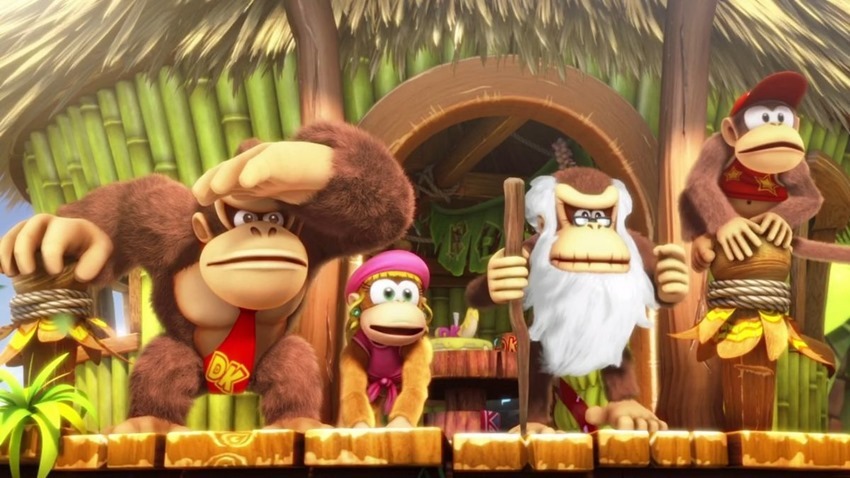 Within its first year, Nintendo’s Switch has outsold the Wii U’s lifetime sales – so it makes sense to port over many of the beleaguered system’s best games to the one. Many gamers will now get to experience gems they’d have otherwise missed. One such jewel is Donkey Kong Country: Tropical Freeze, Metroid Prime developer Retro Studios’ second stab at the venerated platforming series. It’s developed a bit of a deserved cult status as one of the best-designed, tough-as-nails modern 2D platformers, and now it’s available to a new audience.

Not too much has changed in its transition to the newer console. If you wish, you can play the game as it was on the Wii U, with all of its challenge intact. A new mode makes things a little more relaxed though. The new Funky Mode introduces the bandana-clad, 90’s rad-itude surfing simian Funky Kong as a playable character, making the game significantly easier. Mind you, in this game easier just means that it’s less brutally difficult, not that you’ll be able to walk through the game. 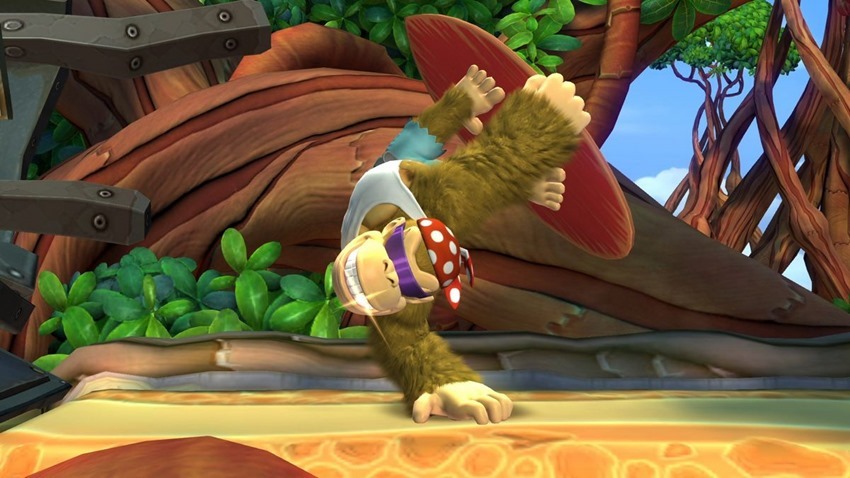 Funky Kong comes equipped with a surfboard that allows him to double jump and hang for airtime, making many of the game’s pixel-precise jumps a lot easier. He’s also invulnerable to spike damage, has extra hearts, and can take two additional inventory items with him to each level. He can breathe underwater indefinitely too. He doesn’t however, get to free his monkey pals from barrels to aid his quest (though you can still play in Funky Mode co-operatively). The other change that makes playing in the Funky Mode easier is that any collectables you get during a level will remain collected, even if you die en-route to the finish line. Those benefits don’t help in the rocket and cart sections, so there’s still a palpable challenge. Of course, collecting everything is a challenge no matter how much easier the game is to play. 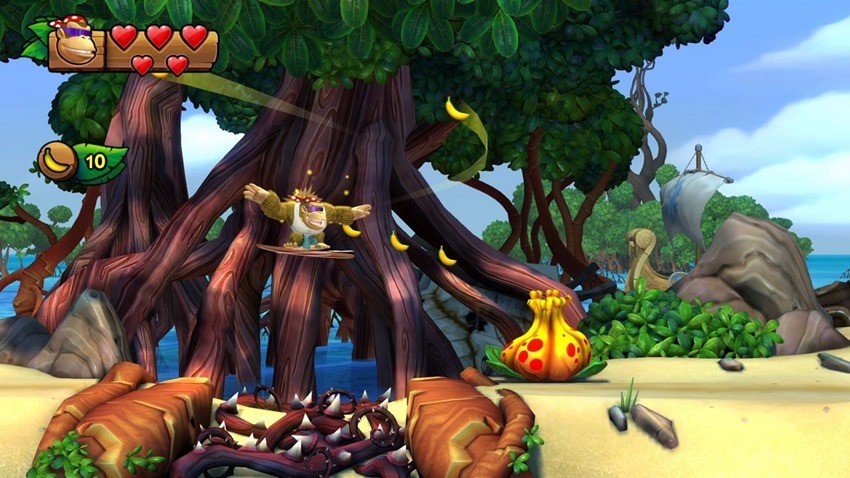 It starts off, like so many games of its ilk, with some semblance of a plot. This time, instead of Kremlings or Tikis to ruin the fun we have a new group of antagonists: Snomads. They’re a group of villainous Vikings who prefer a far colder climate, and they’ve come to freeze up Kong Island with their arctic blasts at a rather inopportune time – Donkey’s Kong’s birthday. Naturally, our favourite simian isn’t too pleased with the colder weather, and sets about sending the Snomads back to where they came from. Here’s the entirety of the plot, as delivered by the game’s opening cinematic.

The game, like other recent Nintendo’s titles, admittedly doesn’t deviate much from the established formula, but Retro Studios has done more with this latest DKC than simply change the temperature. The most striking and immediate improvement is that Donkey Kong is in HD for the very first time, and he looks incredible. I spent more time marvelling at his glorious fur than I care to admit, and that’s just one of the bits of fine detail you’ll find stuffed in the game. Though it stays familiar throughout, Tropical Freeze does much to improve the Donkey Kong Country experience. 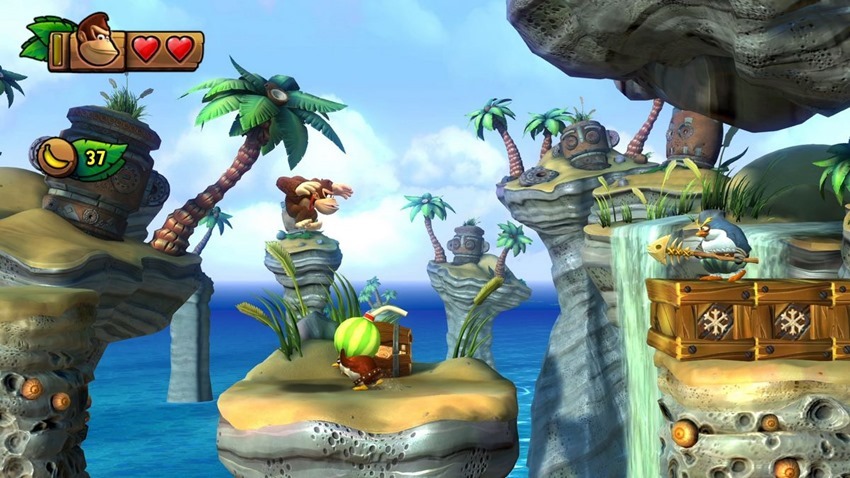 Tropical Freeze’s mechanics are largely the same as those in the previous game; Kong will still have to jump on things, pummel the ground and grasp on bits of overhanging grass. And it’s still rather challenging. You’ll die…a lot. To help you stay alive a little longer, you get a little help from your friends; support characters who double your life tally and grant you a few abilities. Encounter a branded DK barrel in a level and you’ll find a partner, only now the barrel will alternate between three sets of initials to reveal Diddy, Dixie, or Cranky Kong.

Diddy Kong still clings to Donkey Kong’s back, equipped with a jetpack that can extend his jump like Princess Peach in Super Mario Bros. 2. He’s joined this time by Dixie, whose swinging ponytail increases the height of jumps, and the cantankerous Cranky Kong, whose walking stick allows him to pogo about, like Scrooge McDuck in Capcom’s Duck Tales. Each is useful in their own way, making sections of levels just that little bit less frustrating, or help in finding any of the many collectables, secret entrances, and hidden areas. Each is also capable of enacting a unique “KONG POW” ability that recharges over time. Diddy’s turns all on-screen enemies into 1up balloons; Dixie turns them into extra, stackable hearts and Cranky’s Midas touch turns them into coins. 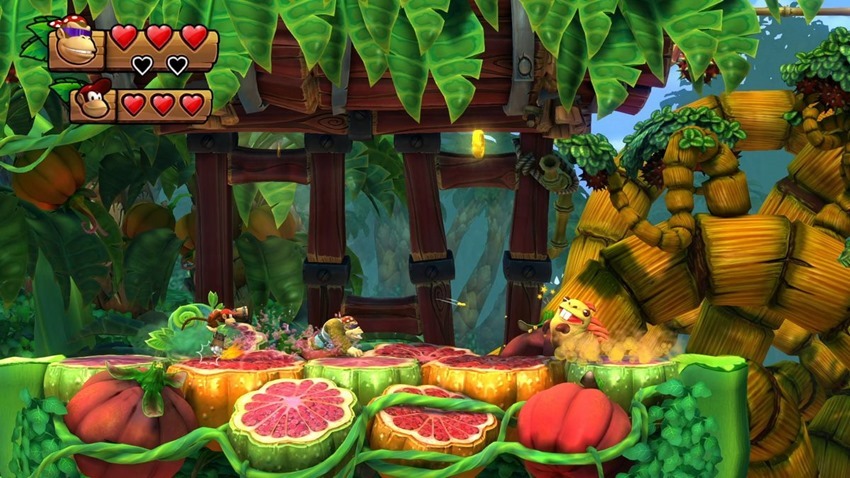 Playing in co-op, Donkey Kong and his partner are no longer tethered, and it makes the game that much more frantic, furious, fun, and frustrating. I find the game more difficult in co-op; without the crutch afforded by Diddy and co, my giant ape ended up falling to his death more frequently – and the shared pool of lives means they’ll dwindle down twice as fast.

And yes, like the game before it, there are puzzle pieces and letters spelling out KONG on each level. The letters themselves are easy enough to find, but collecting them can be a different story entirely. The puzzle pieces are significantly harder to find. You’ll have to collect all the bananas in a section to reveal them, or find them in hidden areas. It’ll take months to collect everything, and once again doing so unlocks bonus levels that’ll have even the most prodigious platforming pundits swearing in frustration. For the dedicated, there are secret worlds to unlock, if you have the testicular fortitude, patience, and wherewithal. Of course, it’s a sort of frustration that’s worth enduring, thanks to the ingenious level design. That exceedingly clever level design never fails to be interesting; a constant introduction of new elements and challenging set-pieces keeps it fresh and exciting throughout – and that’s despite the fact that if you’ve played Donkey Kong Country Returns on the Wii or 3DS, you’ve pretty much played this before. Much of that level design goes into making you meet an unfortunate and untimely end – but it’s slightly uneven. You’ll be running about with a cache of 60 lives, only to lose them all on a single level.

Some levels are the sort you’ll breeze through, and then just moments later you’ll be faced with all manner of tricky timed jumps, devilishly evil enemy placements, and bits where you have to use incredible thread-through-needle precision to save yourself from dying

For the most part, just about every level contains the same sort of incredible design, save for one of the game’s islands. Swimming levels in any game are seldom fun, so it’s baffling that Retro decided it would be a good idea to have an entire island very nearly dedicated to underwater shenanigans. Thankfully, they’ve made up for that by not falling into an obvious trap. With ice a central theme to the game I expected very nearly every level to be crusted with ice, making everything slippery and removing much of the precision, but that thankfully only happens right towards the end of the game. 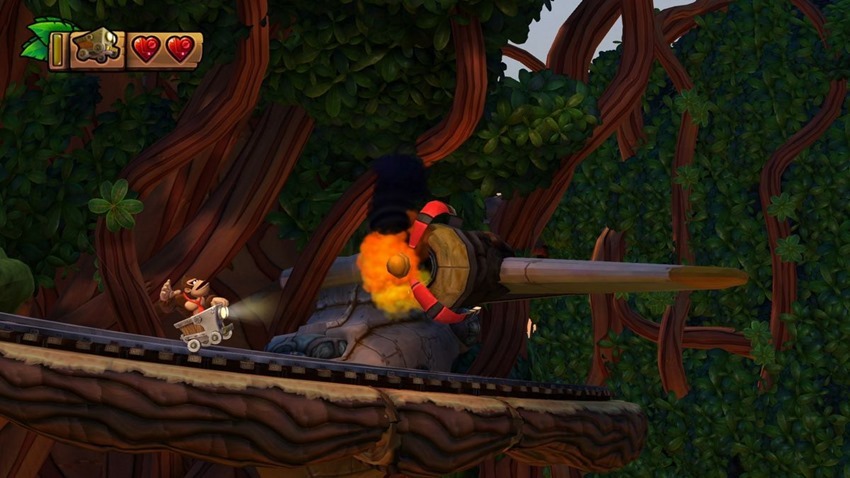 Many other elements from the previous games return. Yes, that includes the tricky as heck Flappy-Bird-like rocket barrel sections, which have you tapping a button to control the ascent of a rocket while avoiding the obstacles that keep coming at you. Also returning are the game’s infamous mine cart levels, which call on all the platforming precision already required while hurtling along at considerable speed. Rambi’s back too. As with the first game, you can purchase items to help you on your way; extra lives, green balloons that save you from plummeting to your death and a squawking parrot to help find puzzle pieces are a small sample of the goodies on offer, purchasable with the coins you collect through the game. 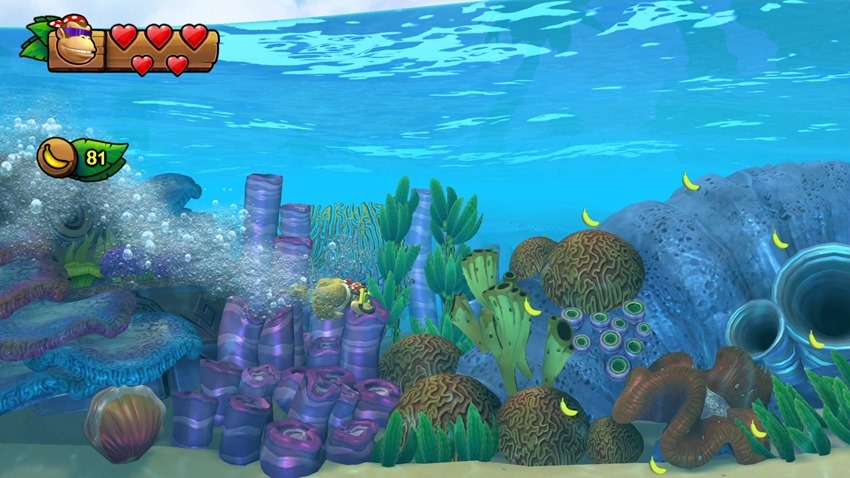 Retro’s also made Tropical Freeze’s bosses a little trickier; the standard Nintendo three-phase bosses are nowhere to be seen. The first boss, a Viking sea lion is easy enough; he slides along the screen just begging you to jump on him – but soon he’s tossing bombs and dive-bombing penguins and just keeps on coming back for more. The bosses get more inventive and challenging right to the end, where, unfortunately, the last boss is a standard trope. It’s a bizarre misstep in an otherwise excellent rogues gallery.

It’s worth noting that there are just six worlds in Tropical Freeze, compared to the 8 in the first game – but the stages are longer, there are far more secret stages and they are – save for all the underwater nonsense – uniformly excellent.

As far as the Switch port goes, it runs rather spiffingly. In docked mode, you can expect a resolution bump and significantly better loading times. In handheld mode, you’re capped at the system’s 720p display, but that matches the Wii U original. It runs at a smooth 60fps in either mode. Of course, you can split your Joy-Cons to play the game co-operatively, but in that mode, it’s so chaotic that I’d still recommend going it alone.