Fan favourite Damon Baird, the blonde-haired snarky and least overtly muscular member of Gears of War’s Delta squad has always stood on the side-lines, cracking wise, the narrative focusing mostly on Marcus Fenix and his chest-bumping bromance with the increasingly sullen Dom Santiago. That changes with Gears of War: Judgment, which places Baird squarely in the spotlight.

It’s mere months after the end of the Coalition of Ordered Government’s 79 year-long Pendulum Wars against the Union of Independent Republics; and mere weeks after Emergence Day and Sera’s devastation at the hand of the invading locust Horde. The leader of Kilo squad, Braid is joined by the familiar – if somewhat slimmer and looking less like he eats his morning cornflakes with steroids – face of Augustus Cole, or The Cole Train, if you’d prefer.

Rounding out his squad is fresh-out-the-Onyx-Academy Sofia Hendrick, a by-the-book sort who opposes the use of inventive tactics and Garron Paduk; a tough-as-nails former UIR prisoner of war who convinced the COG he’d be better served stomping in Locust faces than sitting in a cell. And of course, he sounds Russian. Baird and his lovable band of roguish cohorts are on trial for treason; explaining their actions in the weeks following E-day. Their judge, a pencil-thin moustached military bureaucrat by the name of Loomis presides over the case, taking in each squad-member’s testimony, one by one; stepping away from a purely linear narrative.

As each chapter of the game is narrated through this testimony, there are far fewer cut-scenes, and significantly less in-game chatter; much of the story is instead told by the level design; Sera is a brighter, more vibrant world; still filled with colour instead of the stark and grim contrast of the original game’s 50 shades of grey and brown. Gears of War (outside of the novels and comic books) is not the series to turn to for any sort of grand, sweeping narrative – but there’s even less of that here. The plot is pretty bare, with more exposition coming from the environment; the stories not told. It’s so soon after the Locust have surfaced, evidenced by the abandoned city streets of Halvo Bay; littered with abdicated vehicles and bloodied, half-packed suitcases. They never stood a chance. No, Gears of War has always been an excuse to shoot at things, or chainsaw them in twain. That hasn’t changed – and the lack of the overdramatic machismo puts the emphasis solely on the action. Despite the new developer, Judgment is still firmly Gears of War, though it feels different. It’s tighter and faster paced; the action of fending off wave upon wave of the subterranean savages almost relentless. There have been some changes to the system and its control scheme to fit the accelerated action. Gears are no longer able to carry three weapons; instead they’ll have just a primary and secondary weapon – switched with the “Y” button instead of the 360 controller’s fussy D-pad. It makes weapon switching faster and more intuitive, leading to a more bullet-frenzied battleground. It’s also a move that’ll likely relegate the series’ pistols to a footnote in Gears history – barring of course, the hideously powerful Boltok pistol that’s beyond deadly in the hands of those who’ve taken the time to master it. Grenades, instead of being selected as a weapon, can be quick-thrown with a tap of the left bumper; or with that same button held down  to reinstate the familiar blue glow of the grenade throwing arc. Oh, and the vicious Sawed-off shotgun can now be fired twice before needing to be reloaded. That’s just the first change to the formula you’ll notice. Enemies now spawn on a semi-random basis; what that means is that each time you retry an encounter, you’ll be faced with different types of Locust  – and the barrage of grenadiers you just had a hard time dispatching with might now be Bloodmounts and wretches instead. If you play on any of the game’s more trying difficulty levels (and you really should, especially in co-op!) and you die frequently, it helps add the spice of variety. There’s also a successful attempt at adding some of Gears’ wave-based staple Horde Mode’s intensity to the single player game. Some sections will find you holed up at a choke point; with a limited number of sentry turrets and fortifications at the ready; with a countdown timer reminding you that the next wave of enemies will be along shortly.

There are some new weapons to help you mow down enemy locust, mostly forgotten UIR tools of war. You’ve got the Booshka, a grenade launcher of sorts that propels a clip of highly explosive, ricocheting pipe-bombs, and the Markza – a semi-automatic sniper rifle that’s less powerful than the Longshot, but allows you to pull off a couple of shots before needing to reload. The Locust have appropriated the Markza as the Breechshot, removing its scope and adding a blade to its undercarriage. There’s also a new tactical weapon in the tripbow, which allows you to lay down trip-wire traps. There’s now also a new meta-game, joining the ribbon and XP from Gears of War 3. You can now earn stars which you’ll acquire by adding a bit of flair to your gunplay. Headshots, gibs, and executions – oh, and earning ribbons from specific displays of badassery – will all add to the bar, netting you up to three stars by level’s end. if you see the Gears Crimson Omen on a wall, you can choose to play a “Declassified” version of the mission; adding tougher condition for success, and an increased rate of star farming. The Declassified challenges modify the levels, but have no narrative outcome – adding an extra challenge by way of time limits, a restricted arsenal, reduced visibility or an uglier, more ferocious barrage of enemies. Having to fight off entire armies of locust with little more than a pistol and a Boomshield makes for an exhilarating experience. Stars unlock new character skins and other vanity items and, of course, achievements.

This game-within-a-game, while adding some welcome variety also, unfortunately, takes away the game’s cinematic feel; with score and star tallies coming up all time time, you’re constantly reminded that yes, you’re playing a videogame and not a functional part of some Hollywood blockbuster. It’s highlighted by the meta-game free secondary campaign, Aftermath, which you unlock by earning 40 stars in the campaign proper. With Aftermath, you’ll play as an older, more rugged Baird and joined by his older, larger and louder buddy Cole as they encounter an old fiend, piecing together one of Gears of War 3’s puzzles. Aftermath offers a purer, less constrained Gears of War experience, and is all the better for it.

The game’s multiplayer has gone through a similar overhaul. In the standard adversarial modes you’re now only able to select one main starting weapon (Gnasher, Lancer, Sawed-off, Retro Lancer, Hammerburst or the Markza) and a frag – you’ll have to find other augments to your arsenal on the map. It’s probably prudent to mention that active reloads, in multiplayer at least, no longer grant a damage buff – something that’ll likely enrage the Gears elite, but open the game up to newcomers.

Gears of War’s multiplayer has always been centred around being part of a team, but that goes out the window with Judgment, which includes a free-for-all deathmatch mode, joining the standard team deathmatch. It’s decidedly un-gears, but it works thanks to the rapid pace of play. The down-but-not-out revival system is removed, but it makes sense – why would any of your 9 foes, bent on turning you into chunks of meat, want to help you? It doesn’t quite fit in with Team Death Match – but for better or worse, it’s curiously absent from there too. Both modes are initially a little jarring, as locust aren’t playable; you’ll be going up COG against COG. Domination exists as a fairly standard King-of-the-Hill mode. Two teams of five are each tasked with capturing and holding 3 rings within each map. The more your team holds those points, the more they score. It’s Annex, with a different name.

OverRun is the  brand new, class-based defend-and-attack multiplayer mode , and it  feels like a mix of Horde 2.0 with Beast mode from Gears of War 3. One team of players plays as COGs and are tasked with defending a series of objectives, while the other team plays as Locusts on offense. after each round of, roles are reversed and players get to do what they just tried to prevent the other team from doing. Playing as the COG, you’ll be able to select from the following classes: As the Locusts, teams will be playing out a mode similar to Beast mode, deploying an increasingly larger and more destructive torrent of nasties. enemy tiers are more simplified, granting players access to just two tiers of four Locust, ranging from explosive tickers, all the way up to the expensive, but nigh unstoppable Corpser, able to burrow under fortifications.

The class-based warfare adds a more tactical, faster paced  element to Gears of War’s multiplayer repertoire, and is genuinely both fun and engaging – and should keep Judgment a firm favourite for months to come.

OverRun is joined by Survival, which essentially replaces Horde mode. Employing the same class-based gameplay, it pits the COGs against wave upon wave of increasingly challenging Locusts. It plays out exactly the same as Overrun, except with AI controlled Locust. As a warning, it is pretty challenging, and completing all ten waves is going to take considerable team effort.

There are concerns though; there are just 4 maps available for the adversarial modes, and a further 4 for OverRun and Survival. You know there’ll be more coming, and that they’ll be available as DLC – which I fear will end up fragmenting the game’s playerbase – something we’ve seen with previous instalments of Gears of War. A new level of player customisation, via player and weapon skins that can be unlocked or purchased by microtransactions  The game even makes provision for season pass holders, with a special VIP playlist just for them. Two free maps will soon be made available – but the rest will have to be paid for.

While Gears of War: Judgment is perhaps burdened by the pall of over-familiarity, the changes that developer People Can Fly have implemented are enough, for now, to keep it feeling fresh – and certainly worthy of your time.

Epic Games' new Fortnite Icon Series may be merging the worlds of fashion, music and film … 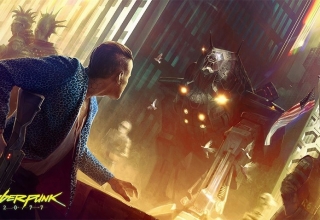 Earlier this year, Cyberpunk 2077, the next RPG for the folks who brought us The Witcher games, was delayed. The developer moved the much-anticipated game from April 16th to September 17th.