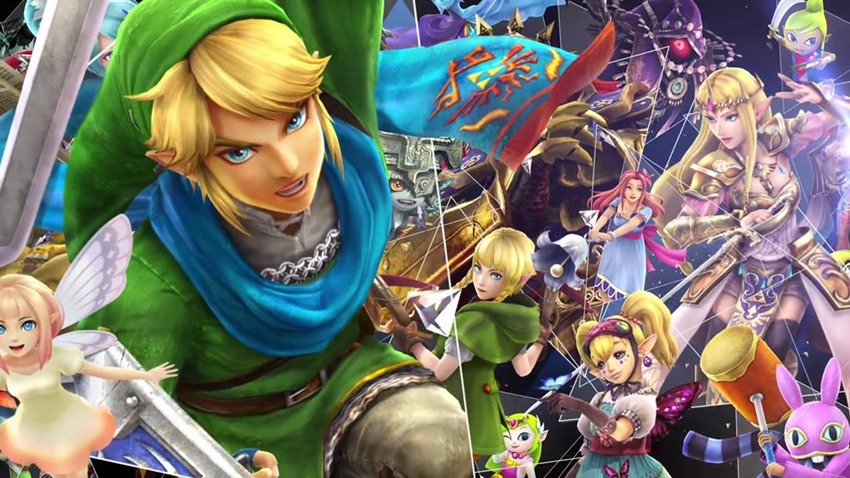 Every Legend of Zelda game is the same…and ye it isn’t. While core elements may survive between sequels and console generations, every game starring a certain lad who dons the familiar green garb of the hero of legend has had something unique to offer. Ocarina of Time played with time travel, Wind Waker focused on mastering its oceanic world and the more recent Breath of the Wild toyed with the idea of combining freedom with ingenuity. 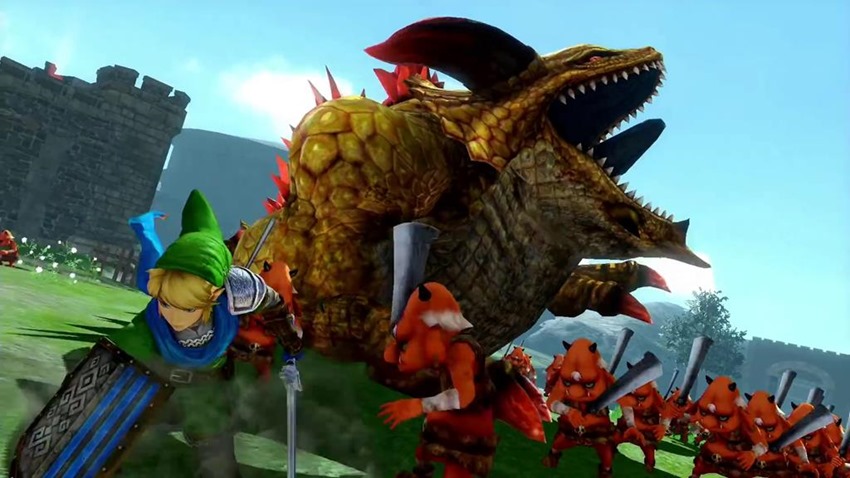 It’s that lateral thinking that has always defined the Legend of Zelda, an action game that required creative thinking to overcome various obstacles. That’s not to say that Link hasn’t seen his fare share of combat over the decades, but giving players the tools to progress without even having to draw your Mastersword? Now that’s something special. 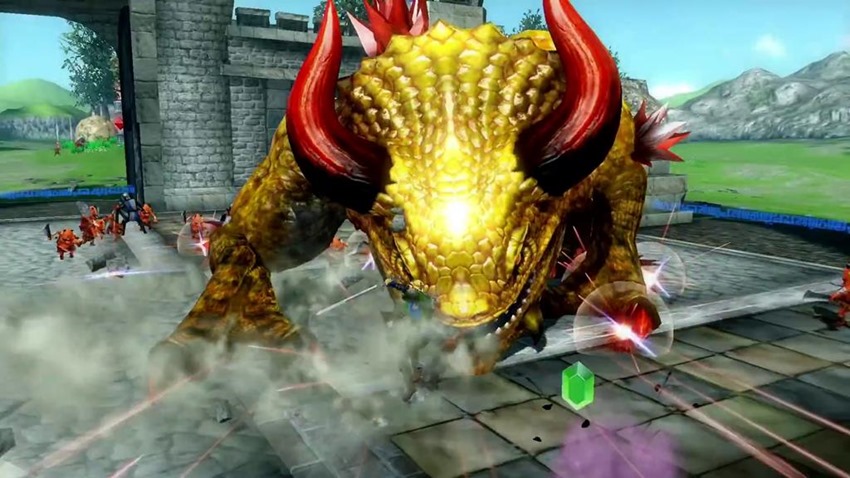 Hyrule Warriors: Definitive Edition is the complete opposite of that. It might have some strategy at play, but it’s a musou game through and through. What does that mean? It’s a power fantasy dialled up to 11, as you hack and slash your way through scores of disposable minions as you leverage light, heavy and special attacks to do the most damage possible on a battlefield.

It’s simplistic, yet cathartic in its execution as even the quickest of battles has the potential to deliver a bodycount that numbers in the thousands by the time the final bell has rung. In addition to all that, you’re also racing from hotspot to hotspot as you secure key strategic areas, reinforce troops and fighting back against some of the most lethal heavyweights pulled from Hyrule’s history. 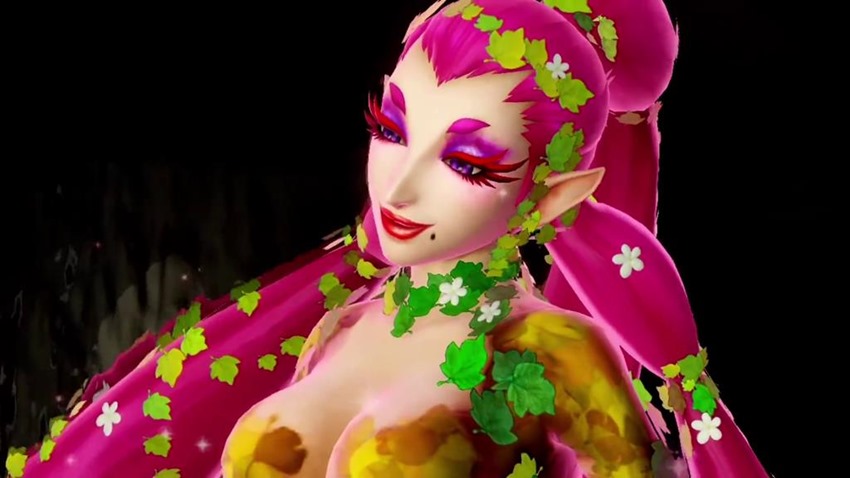 That’s where the real charm lies, as Hyrule Warriors: Definitive Edition not only cherry-picks the best elements of decades worth of Legend of Zelda lore, but it does so in typical Koei-Tecmo Warriors fashion under Nintendo’s watchful eye. Every character has something to offer, bugs are non-existent and the inclusion of all the previously-released DLC for the Nintendo 3DS and Wii U versions combined makes it a meaty monster of a game to play. 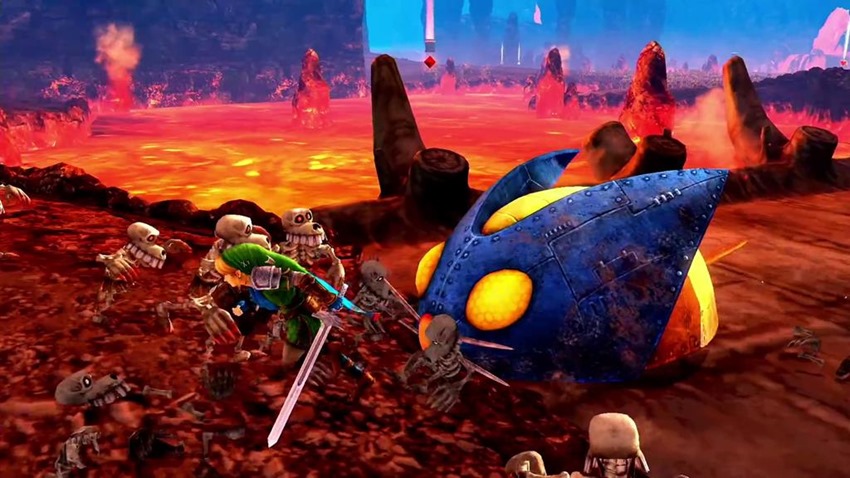 The fact that you can play it on the go, makes Hyrule Warriors: Definitive Edition that much better. While the docked action on the Nintendo Switch is a buttery-smooth action experience that regularly clocks in a high frame-rate, that action is slightly dialed down to a more manageable adventure on the go that hovers around the 30 frames per second mark. There’s also a split-screen mode for players to jam some co-op action on, but unless your last name is Bravestarr and you have the power to summon the eyes of the hawk (HAWK! Hawk! Hawk…), it’s just too dang small to play comfortably on. Still, points for effort. 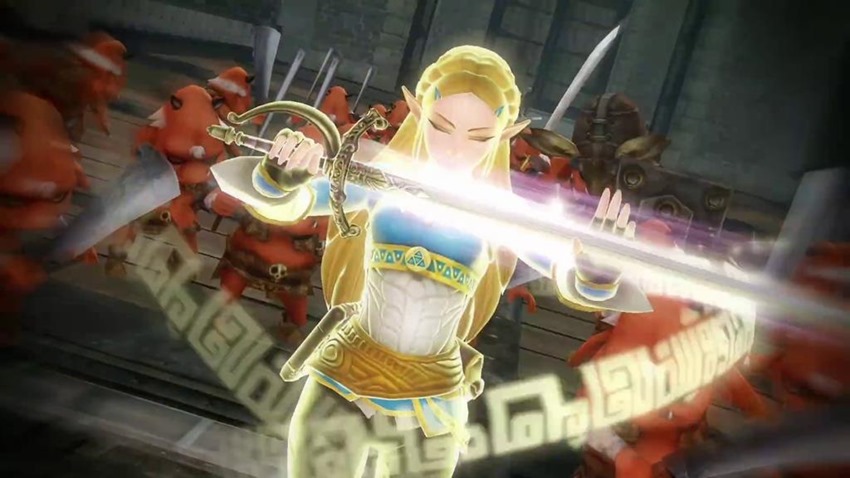 It’s mostly stable, with only slight dips in quality when you’re performing some of the most graphically-intensive super-moves, but you’ll find yourself swinging steel with reckless abandon and few dips between each slash of the sword as the hours roll by. I could wax lyrical for hours on Hyrule Warriors being both a fantastic Zelda and Musou game, but honestly?

I think Umar’s original review for Hyrule Warriors still does a bang-up job of distilling the magic of that wild spin-off into text. I’ve copied that below if you fancy a re-read, but if you’re looking for a short final verdict on the Switch version of Hyrule Warriors? It’s one of the best musou games ever made, lovingly rendered in green and filled to bursting with fan service content that makes you feel like Hyrule’s greatest badass. 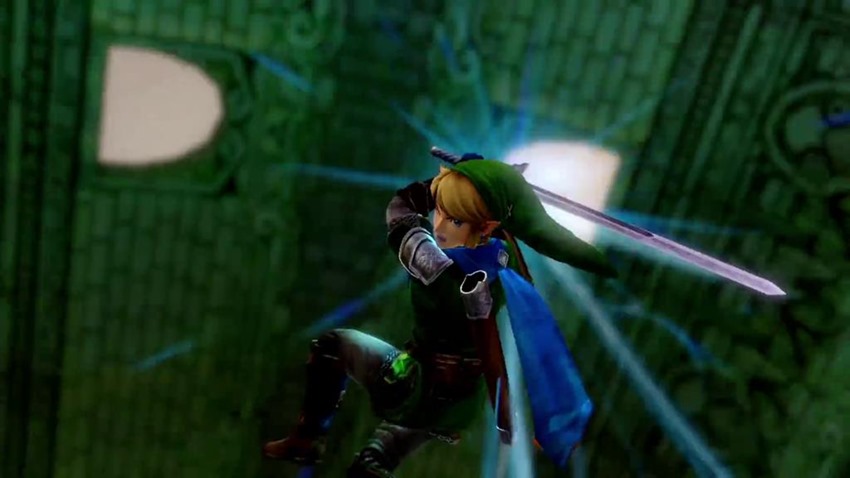 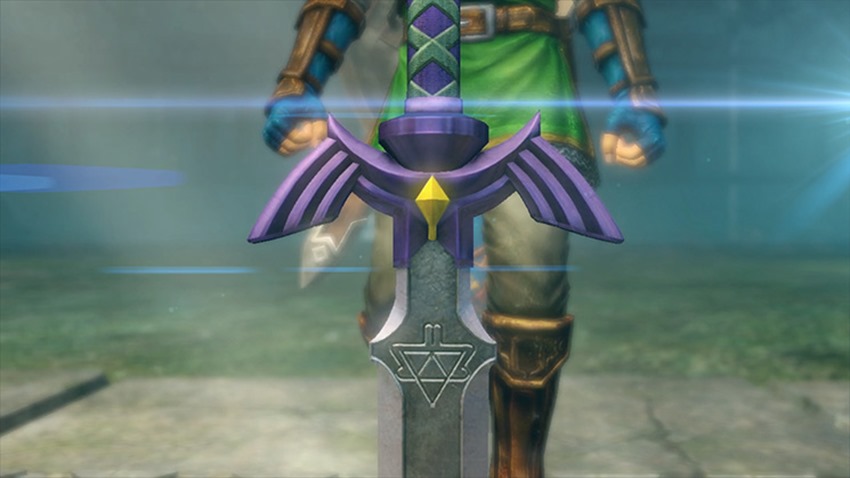 2014’s Hyrule Warriors on the Wii U was quite the surprise for me personally. While I do enjoy Musou (Dynasty Warrior-like) games, I was expecting Hyrule to be just another spin-off, but it ended up defying and going beyond my expectations by offering improved and flashy gameplay, tons of modes and characters, all wrapped up in a package that looked, performed and sounded excellent. It was one of the most content-rich Musou games I have ever played and one that had continued support post-release with great DLC offerings and tweaks. Nintendo has now decided to port that game, with all DLC included and new content and features to the 3DS. It’s quite the package when you consider everything you’re getting and it’s actually a fantastic experience on handheld. Unfortunately, the experience will not be the same for all.

It’s obvious that no single game will be universally enjoyed by every gamer, which is the way it should be as personal taste will always differ. In the case of Hyrule Warriors Legends however, your enjoyment of the game won’t be dependent on your tastes as much as the system you’re playing it on. Legends is releasing on both the old and New 3DS and while both versions are essentially the same, the difference in performance is quite depressing. 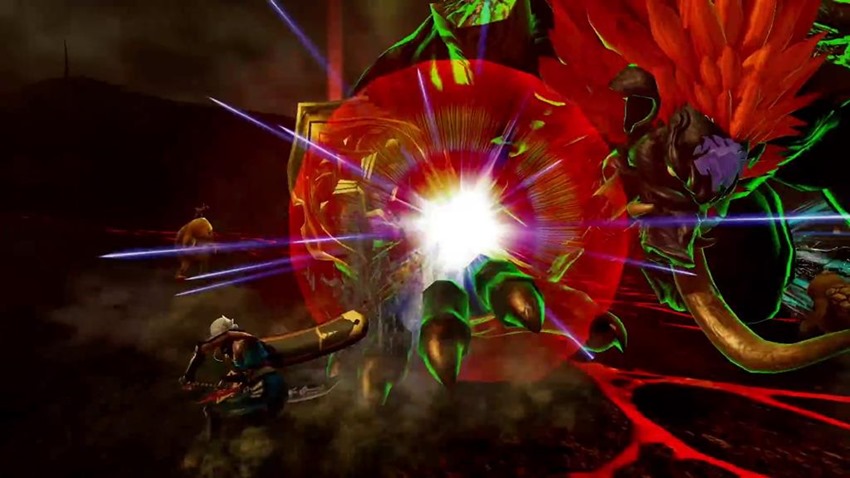 I reviewed Legends on an old 3DS and most of my play time was on this system. Without beating around the bush, this version of the game suffers from incredible slow down and while I’m used to the occasional frame drops by now, it just isn’t the case here as majority of the game runs at a sub-standard speed. To add insult to injury, even with watered down graphics it can’t even handle that many enemies on screen and most just pop in out of nowhere. These two things alone completely and utterly ruins 2 core fundamentals of any Musou game; speed and tons of enemies on-screen at once.

If I have to be honest, I couldn’t stomach much of this version and I didn’t put as many hours into this as I would with any other game I review. I was quite dissatisfied and it would be shameful to present a half-baked review, so I managed to get a hold of the game running on the New Nintendo 3DS and the disparity in performance was immediately evident. Not only did it look better, but it ran smoothly, even when the battlefield was filled with enemies. This is clearly how the game is meant to be played. 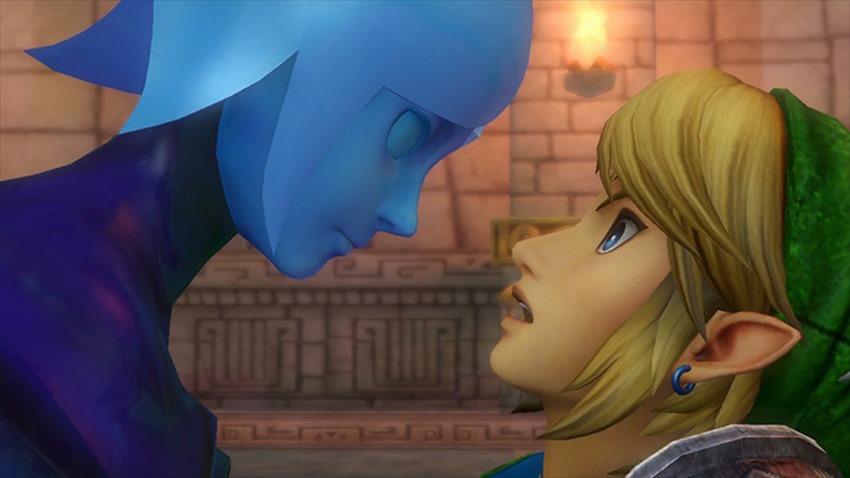 With the New 3DS in hand, I could appreciate the port much more and I have to say, this game is actually a perfect fit for handhelds. The Adventure mode, which is basically a huge set of challenge maps, is really well-suited for quick pick up and play sessions and the rewards for each challenge is worthwhile, making you feel like you accomplished something in a short amount of time. Free Mode is also great if you don’t want anything too strenuous and just want to run around and kill stuff. One addition that is worth mentioning is the ability to instantaneously switch between different characters on the battlefield by touching their respective icon on the bottom screen. It really helps in creating a much more fluid flow to battle as it allows you to switch to another character somewhere else on the map and really comes in handy when you need to quickly get to a keep that’s under attack. 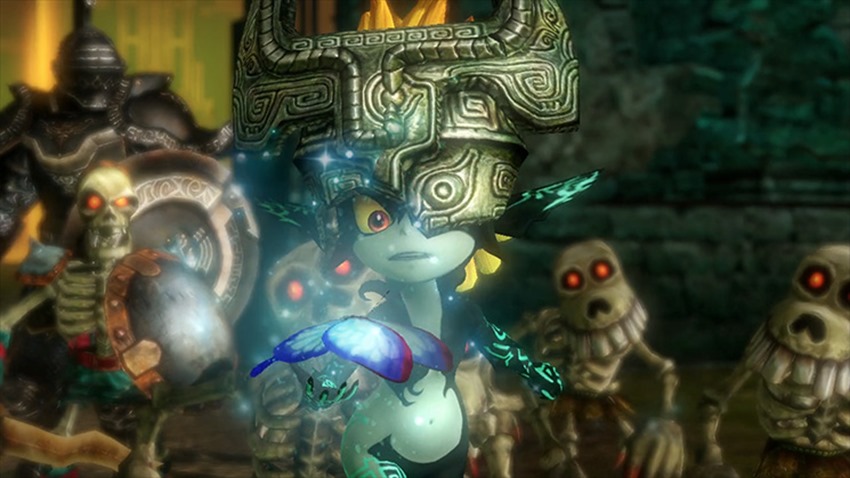 As mentioned before, Legends includes all of the DLC previously released on the WiiU version. I missed out on all of that, so it was really fun getting to try out all of the other characters like Twilight’s Midna and the most beloved by all, Tingle. Beyond that, there’s also a few never before seen characters as well like the female version on Link, Linkle. She comes with her own side story and while there’s nothing exceptional about it, I really enjoyed her as a character. Her moveset was extremely satisfying and her dual crossbows made for some interesting combos that at times actually reminded me Bayonetta or Dante from Devil May Cry. I do hope we see more of her in other Zelda games.

Hyrule Warriors Legends looks fantastic on a New 3DS, and while it’s obviously nowhere near as good as the WiiU version, it still translated well over to handhelds and retains a lot of its counterpart’s visual flair. The soundtrack is still as good as I remember it to be and the guitar riffs in the Solidus Cave track still makes me want to rock out every time. It should be noted however that the 3D function is exclusive to New 3DS but you’ll probably never play with it on as it causes a major dip in performance, so it’s kind of an useless feature. 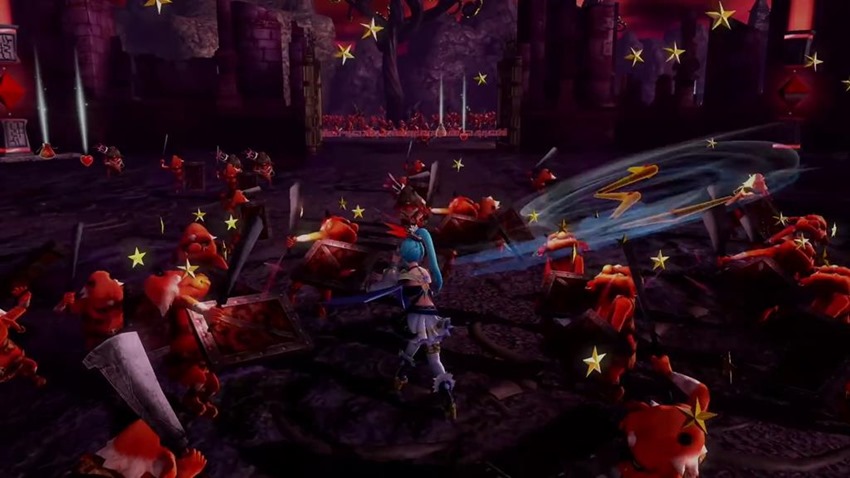 I enjoyed Hyrule Warriors Legends, I really did. It’s an easy game to recommend and its new content and features, updated gameplay and the inclusion of all the WiiU’s DLC makes it well worth the price, if, you have a New 3DS. I simply cannot advise anyone with an old 3DS to buy this game. It runs at a snail’s pace, looks washed out and has terrible enemy pop in. If you feel that low framerates might not bother you all that much, there’s a demo available for you try out, which will give you a good indication of how the game runs. 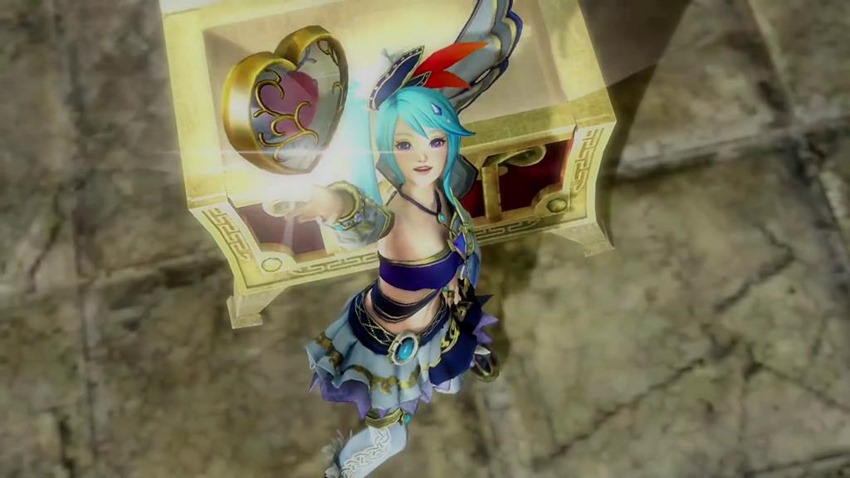 Hyrule Warriors Legends is a fantastic game that is not satisfied with being a simple port. Its new features and content, refined gameplay and the inclusion of all the original’s DLC makes this an easy recommendation.