Home Gaming Hyrule Warriors review – A Link to a blast

If the names Xiahou Dun and Lu Bu don’t evoke majestic images of manly eye patches and mighty Halberds then you’re probably not familiar with the Dynasty Warriors games. The series has garnered a very niche audience over the years and while they seem to be releasing a new game almost every year, it has never quite become a household name. The Legend of Zelda however is a beloved and often revered series in the gaming world. It is so popular that even non-gamers hum along to the sounds of the game’s signature theme song. So when looking at these two series’ as independent franchises, one has to wonder how Hyrule Warriors ever came to be. Whatever the reason may be, I thank the gaming gods that it happened. 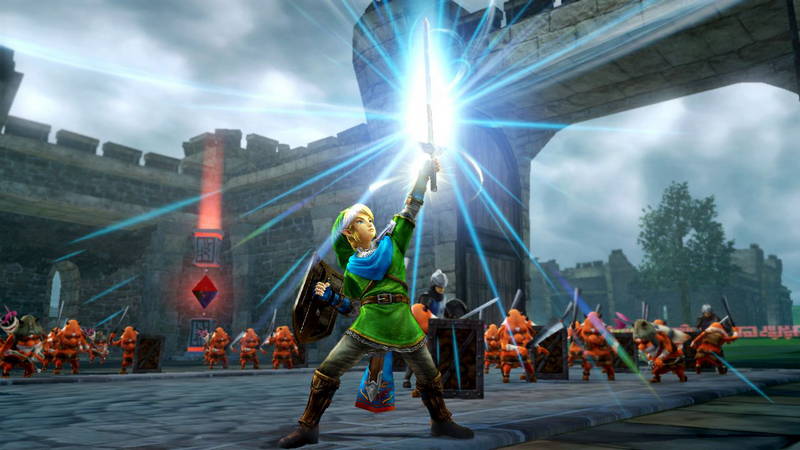 Hyrule Warriors is essentially a Dynasty Warriors type game set in the Legend of Zelda universes, similar to Dynasty Warriors: Gundam. By this I mean, the game has you slicing and dicing through hundreds and thousands of copy and pasted character models while performing the same combos over and over again, only this time, you’re doing it as famous characters from the Zelda games, and that’s awesome.

The story tells the age old tale of good versus evil, with the forces of darkness once again threating the land of Hyrule and it is yet again up to Link to save Princess Zelda. Only this time, Zelda is a total butt kicker and we get to see a different side to the once helpless princess. Not only that, but the main antagonist of the game has the god-like power to open rifts and resurrect evils from different ages, thus creating a war between characters from different timelines in the series. 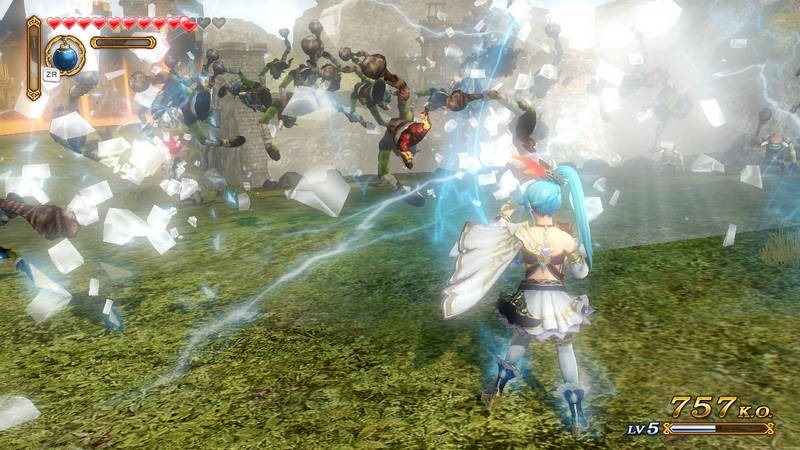 We get to experience epic battles between Fi and Ghirahim and we even get to play as the awesome Sheikah, Impa. If this all sounds like something you’d find in an online piece of fan fiction, then you’re completely on target. The story in the game is complete fan service and while it’s nothing short of serviceable, it’s always fun to see different characters from different games interact with each other, and there is even a neat little plot twist at the end of the game to put that final cherry on the fandom cake.

While the story might not be the star of the show, the game more than makes up for it by bombarding you with content. Hyrule Warriors offers you plenty for your buck, sporting numerous modes and pretty decent character customization options. Alongside the main story mode you’ll have access to the Free mode which lets you replay previous stages at your leisure and Challenge Mode (added via a patch) which is essentially just a gauntlet of different challenges. The most impressive mode after the main Legendary (story) Mode is the Adventure Mode. 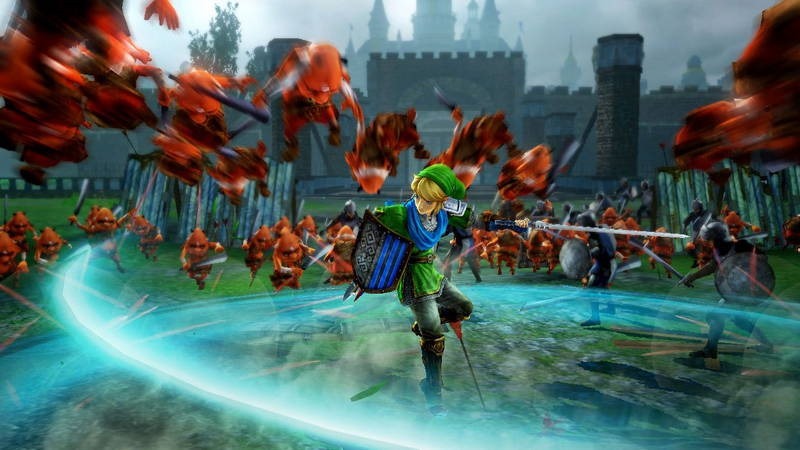 Adventure Mode is essentially a recreated map of the original Legend of Zelda game, with each segment acting as its own little challenge, such as defeating a set number of enemies in a set amount of time. These challenges offer extra unlockable characters and weapons as rewards, but the neat feature here is that all the secrets on the original map are present here, such as hidden staircases under trees. It’s a fun little nod to the fans, well, those fans with good enough memory to remember where these secret locations are.

As mentioned above, this is essentially a Dynasty Warriors type game, so a lot of what you’d expect from that is what you’ll find in Hyrule Warriors. You’ll be running through maps littered with hundreds of enemies, trying to take over their keeps in order to bolster your forces and eventually occupy more of the battlefield. Throughout each of the numerous stages you’ll get different objectives that you’ll do well to complete if you want to keep morale up and keep your forces dominating. It’s a nice tug of war between your enemies and your army and while it’s not as elegant as it might sound, it is satisfying to see the map slowly being filled with your army. 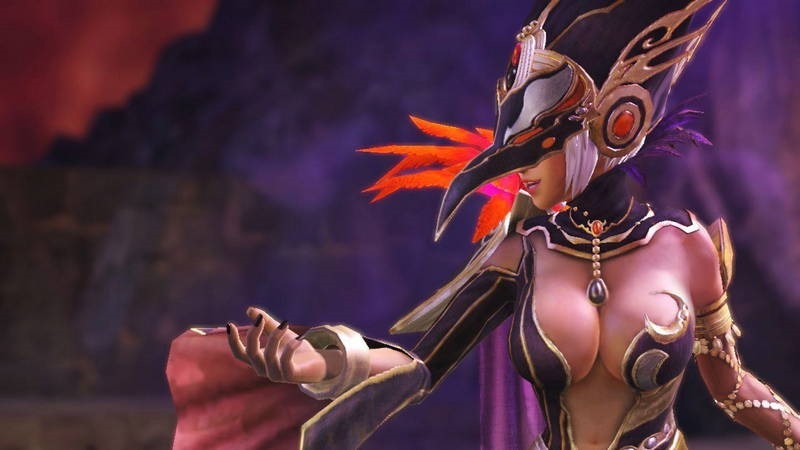 The actual combat is really fun. Yes, it’s button mashy and does get repetitive but the numerous character weapons help keep things fresh and diverse, not to mention the special moves are really flashy and are an absolute treat to the eyes when pulled off. You’ll be able to plough through the minions on-screen pretty easily with a mashup of light and heavy attacks. The tougher enemies however require you to wait until they pull off a specific move, leaving an opening for you to unleash a flurry of attacks that eventually lead into a devastating finisher. The change in pace when fighting tougher enemies is a nice addition, though they’re pretty easy to figure out so it does get pretty rudimentary after a while.

After battle you’ll earn materials that can be used to unlock more combos as well as special buffs. You’ll also pick up weapons during the game that can be fused together which allows you to mix and match weapon skills. One feature I really liked was the ability to use rupees to level up characters that are falling behind; this eliminates much of the grind needed to level up characters that aren’t used very often. I really enjoyed the customization options present in the game and it really helps to differentiate it from other Dynasty Warriors games. 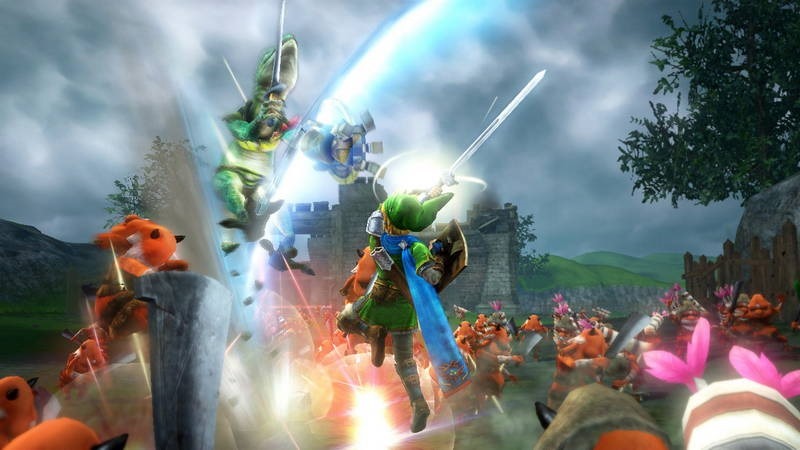 The soundtrack in this game is really good. It consists mostly of rock songs and remixes of existing themes, but they’re so well done that they’ll be stuck in your head long after you’re done playing. The same can’t be said about the graphics though as at times this game looks well behind the 7th generation of consoles, and it’s even more jarring when playing off screen. The frame rate tends to dip as well, especially when playing local co-op. While the dip in frames does sully the experience a bit when playing with a friend, it’s still really fun to tackle maps together while one uses the tv and the other uses the gamepad.