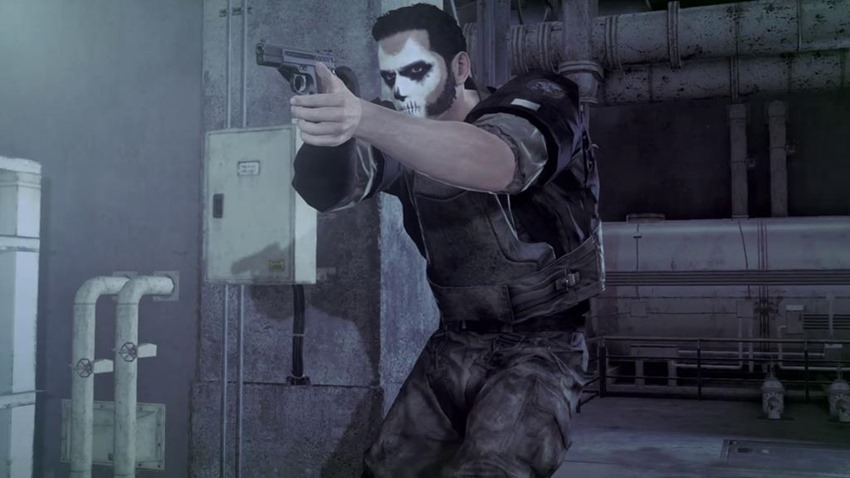 Diamonds. Silicon Carbide. My nipples during winter. In nature, these are some of the hardest known materials that mankind has discovered. There’s something else that you can add to that list: The first few hours of Metal Gear Survive, Konami’s attempt at spinning the Metal Gear Solid franchise into a new direction of stacked odds and unrelenting natural elements that’ll have you constantly knocking on death’s door-

CAPTAIN I SENSE THAT YOUR FLUID INTAKES ARE LOW! 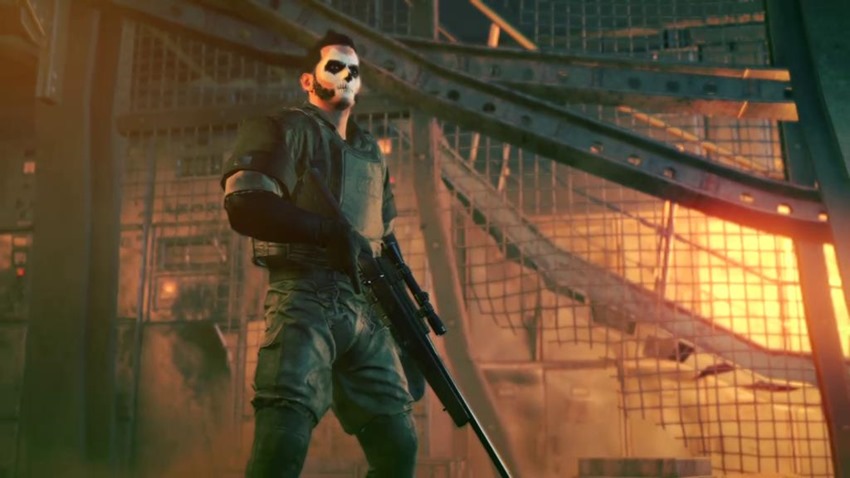 It’s an idea which should have thrown an extra lifeline at the Metal Gear franchise, easily standing next to the likes of Peace Walker and Revengeance as Metal Gear perfected in other genres. Instead, Metal Gear Survive is it’s own greatest enemy, a series of poorly thought-out ideas that clash with one another while players are left fighting a war of attrition against their own biological functions.

CAPTAIN I MUST REMIND YOU TO EAT EVERY ONCE IN A WHILE! 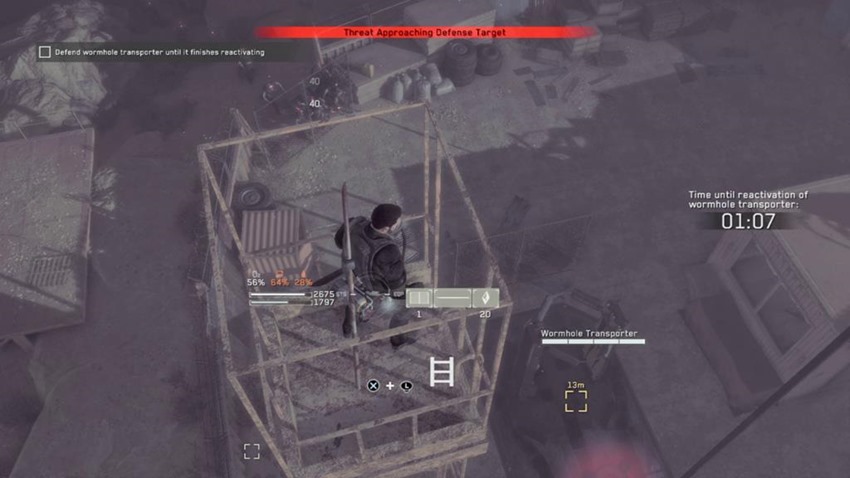 Oh for f***’s sake. Where was I? It should have been so much better. On the surface, Metal Gear Survive is what happens when you take the regular grind of survival games, streamline the resource-gathering loop and combine that with a little of the ol’ stealth and tactical espionage action. Throw in a constant threat of being overrun by what appears to be mobs of slack-jawed zombies whose bodies weren’t thoroughly diluted enough when they got a crystalline infection.

How could you possibly screw up that concept? If you’re Konami, the answer is “easily”.

CAPTAIN PAY ATTENTION TO YOUR OXYGEN! 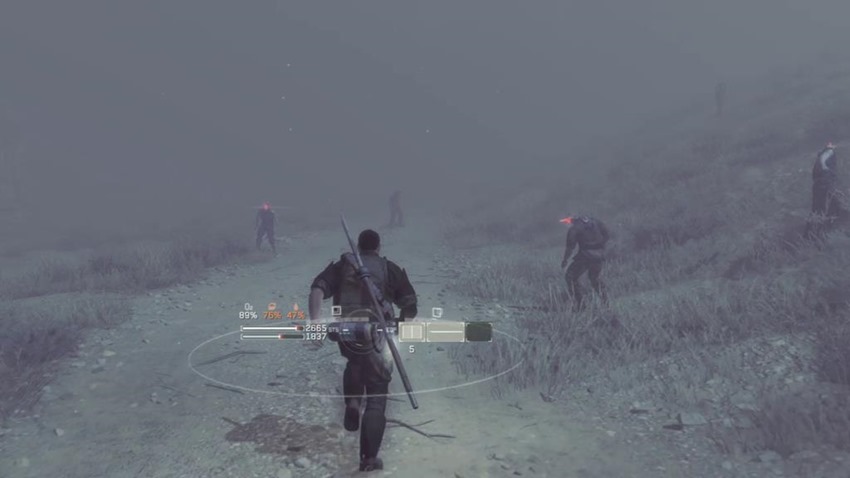 I swear I’m going to toss my PS4 into the ocean. Metal Gear Survive is at least typical of the franchise in the execution of its trite story. Set shortly after Mother Base has fallen to the XOF Forces that attacked during the Ground Zeroes prologue, you awaken to a desolate world known as Dite. It’s you versus the elements, a conspiracy built around weird moments in history and your strings are being pulled in all directions by various puppet-masters as you find yourself scavenging for supplies that’ll keep you alive long enough to go on another expedition.

CAPTAIN HAVE YOU HAD ANYTHING TO EAT YET? 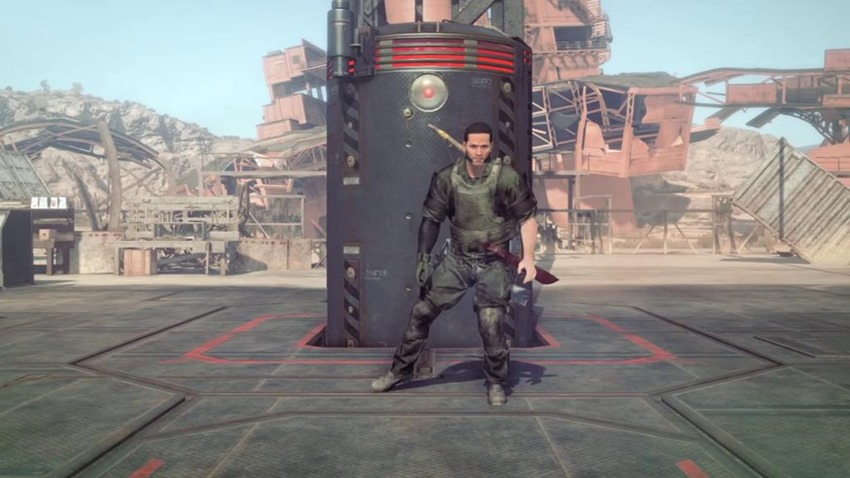 I don’t think it’s a good sign when the best way to fix a glaring game design issue is to shove rusty knives into your ears.

All well and good, provided that you’ll even survive the opening hours. Metal Gear Survive is brutal in its setup, curb-stomping players whenever a chance arises. It’s a painful learning curve, akin to being taught to ride a bicycle made out of faulty lightsabers as you find yourself overwhelmed by a myriad of dangers. If Wanderers don’t swarm you, you’re likely to die of hunger, dehydration or regular dysentery before you even step foot into the unknown regions of Metal Gear Survive. 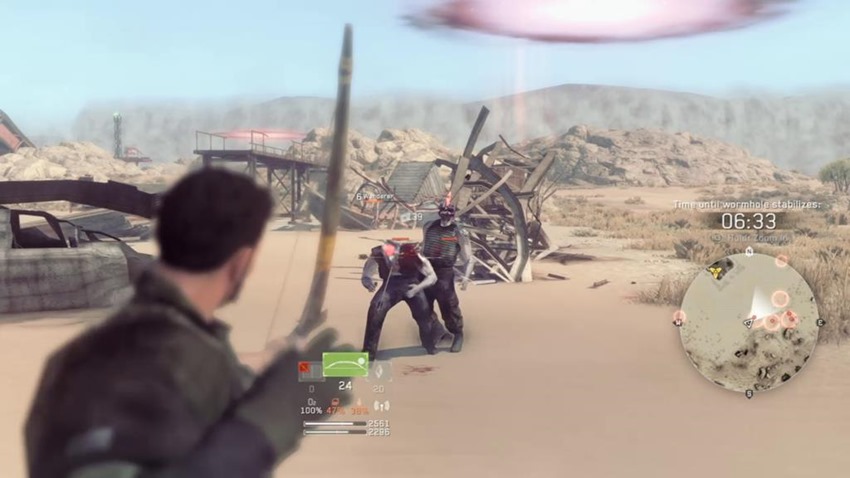 If the idea of managing hunger, thirst and your general well-being sounds familiar, it’s probably because we’ve seen these ideas in other games already. ARK: Survival Evolved and Rust spring to mind, as do their better implementation of those gameplay mechanics. In Metal Gear Survive, the race to manage those internal resources is constant and woefully unbalanced. 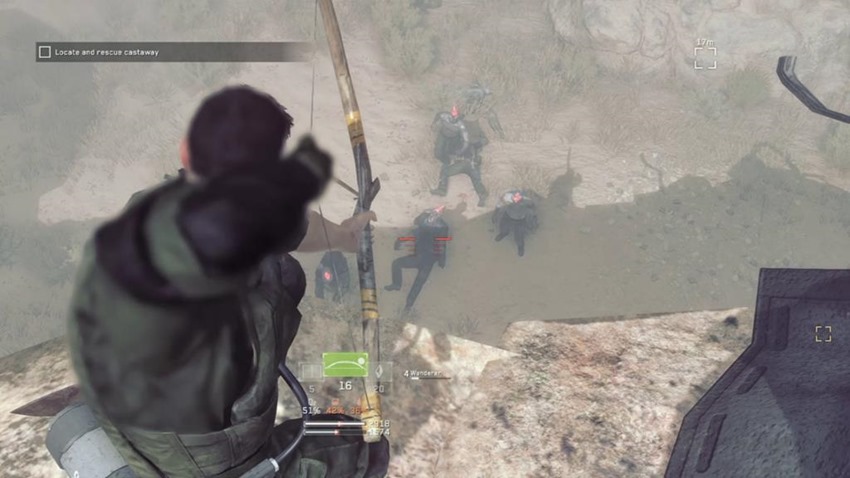 Your stomach burns through calories at a tremendous clip, your throat dries up within minutes and you’re constantly constantly reminded of this by an Artificial Intelligence with a split personality. It’s not that adding these elements is a bad idea, but the end result feels like you’re marching off into the unknown with a knife at your throat, ready to slice your jugular the second you make a mistake.

Metal Gear Survive’s core idea should have added a layer of tension to its exploration, but it instead functions as a harsh reminder that death is always minutes away. It’s a masochistic system, made even worse by the fact that the resources needed to keep you going are few and far between until you can eke out a meagre supply later on in the game.

It gets even worse.

In science, it’s a proven fact that every action has an equal and opposite reaction. That rings true in Metal Gear Survive, a game which takes so much and gives so little back in return as the odds are never in your favour. Everything you do has an effect on your meters. Stamina, stealth and running will sap you dry within seconds, a simple Wander slap will leave your health bar redlining and searching for resources is a race against the clock.

Metal Gear Survive sucks all the joy out of a genre which peaked in 2016 and then gave way to a new generation of Battle Royale games to hog the spotlight. It’s utterly devoid of charm in its execution of sticking to a resource-gathering grind, placing you in harm’s way for mere shits and giggles when given the opportunity.

CAPTAIN YOUR SIDEBURNS NEED A TRIMMING! 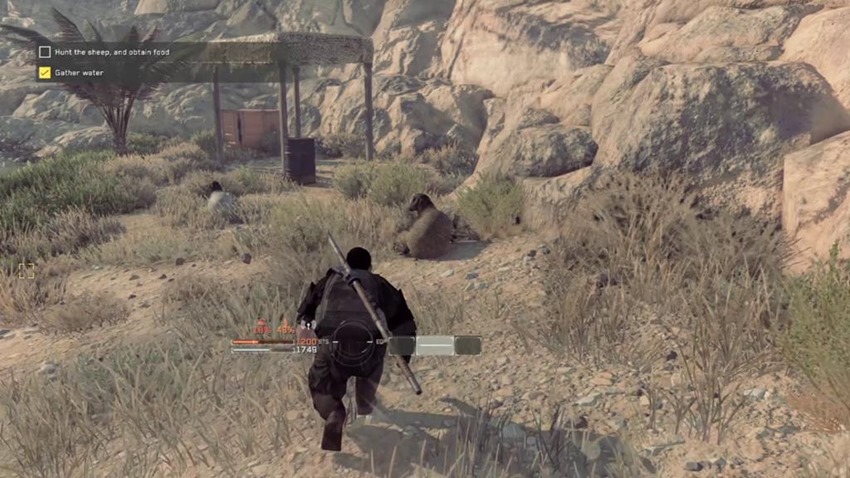 I blame Jim Sterling for his anti-Konami stance that started a movement. There is a chance to upgrade your soldier through combat, but this is a trial by fire that throws another resource loop at you in the form of oxygen. Your tank is also finite, topping it up lowers its efficiency and the game quickly devolves back into a child tugging on your sleeve for more resources. All of this could have been somewhat tolerated if Metal Gear Survive’s combat was up to scratch, but even that quickly falls apart.

Wanderer hordes can be dodged with a gentle jog past them, while you can trick the mobs into ganging up behind a constructed fence while you poke at them with a rusty pipe or bash their heads in with purposefully slow two-handed melee attacks. Instead of being a saving grace, Metal Gear Survive’s combat is entirely hamstrung by an unnecessarily convoluted crafting system. 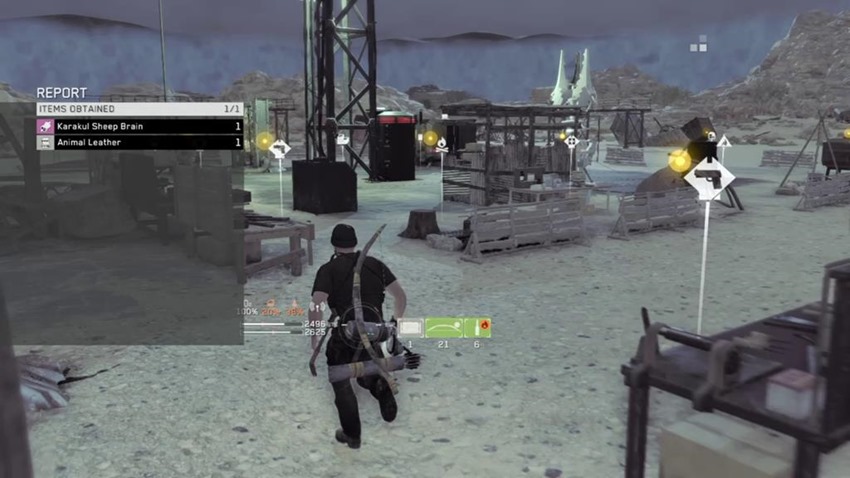 Even getting your hands on a decent weapon is an ordeal. Within the Dust are various containers that hold wonderful and random treasures. Maybe you’re lucky and you find a recipe for a Survival spear or a decent bit of archery kit. Most of the time, it’s a roll of the dice and you’re expected to be grateful for whatever it is that you do escape with while your stomach reminds you that it’s on the verge of consuming itself. 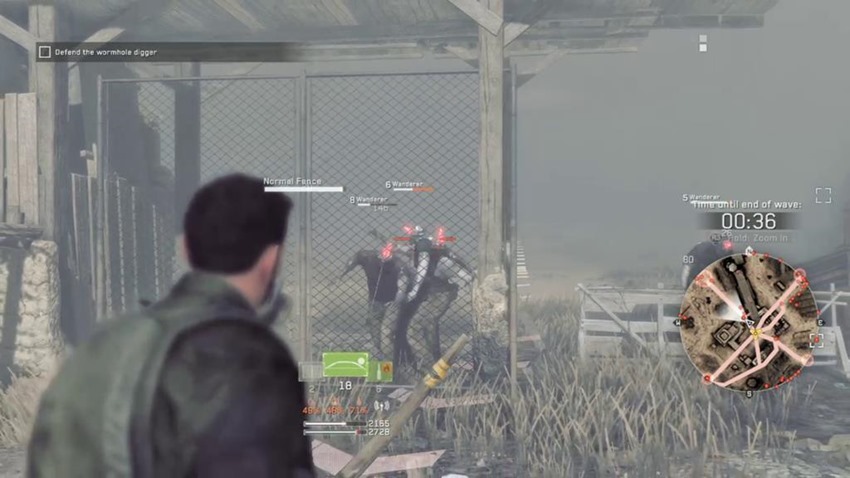 You’re still going to need the relevant materials to create your gear, which means another trip back into the Dust and another reminder that you’re about to die of thirst as it happens to have been an entire three minutes since you last downed a canteen of water that nearby sheep had pissed in. It’s a constant loop of short expeditions that takes you further and further into the Dust in an effort to get your hands on the good stuff.

There is a certain element of pleasure to be found in actually succeeding in getting your hands on what you want. It speaks volumes of the contrasting game design that the smallest of victories feels utterly massive when compared to surviving another day in Dite. When Metal Gear Survive does feel great, is when you’re given a rare chance to plan and fight back against its systems. 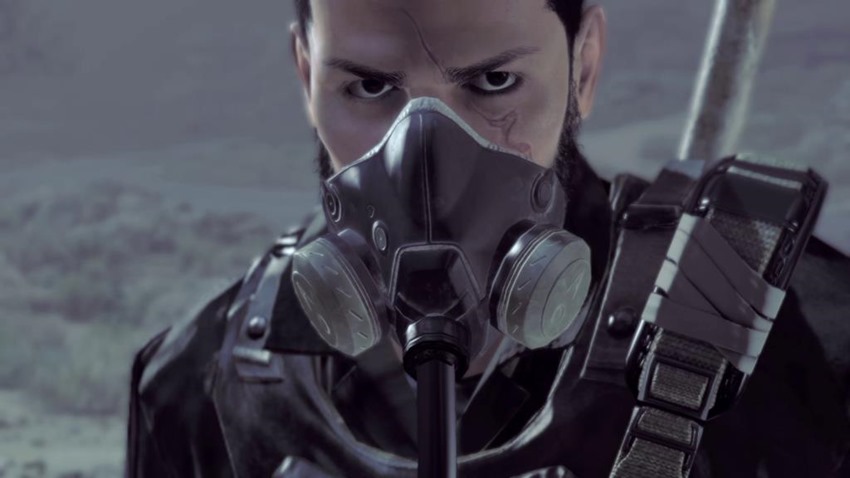 There’s a certain thrill to fending off hordes of Wanderers as you take back a wormhole transporter station, reinforcing your zone and laying traps in the process. Likewise, building a base in Metal Gear Survive is a lesson that survival games could learn from, as you’re given a decent patch of land within which to set up necessary stations and farms without any fuss provided that you have the resources required.

The strange fact here, is that Metal Gear Survive is on paper a competent stab at the survival genre. It has a proven engine powering it, its gameplay is Solid Snake-approved and I’m all for a flip of established assets being used to provide something new. At the same time, it comes off as a game designed by a committee of old men, suits around a table who want to know if those darn kids still like that Fark game with the dinosaurs. Metal Gear Survive is a game that consumes its own ideas with an overabundance of exposition and brutality in the execution of these grand designs, that relies too much on tasking players with sticking to a routine of exploration and home base maintenance or risk a quick death by starvation. It’s a train wreck by any measure of the genre, and yet I’ve found myself invested in a game whose signature style is that of an experience of woulda, coulda and shoulda.

There’s a decent layer of multiplayer attached to Metal Gear Survive as well, that asks you tio grab a few friends and engage in some simple thinning of the hordes while you defend a base, where rewards are far more generous and penalties for merely existing are a lot more lenient in comparison to Dite’s unforgiving landscape. 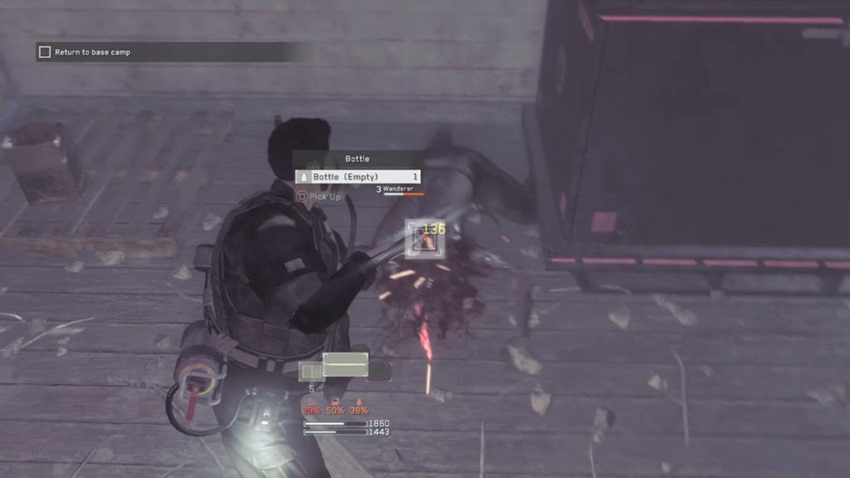 Multiplayer is the template that Metal Gear Survive’s single-player should have followed, but barring an entire recode of the base game which seems highly unlikely given the budget nature of this title, it’s a case of too little too late. At least the multiplayer allows for some breathing room, in a game whose very design is noticeable for good ideas swallowed by overdesigned menus and a race against the clock.