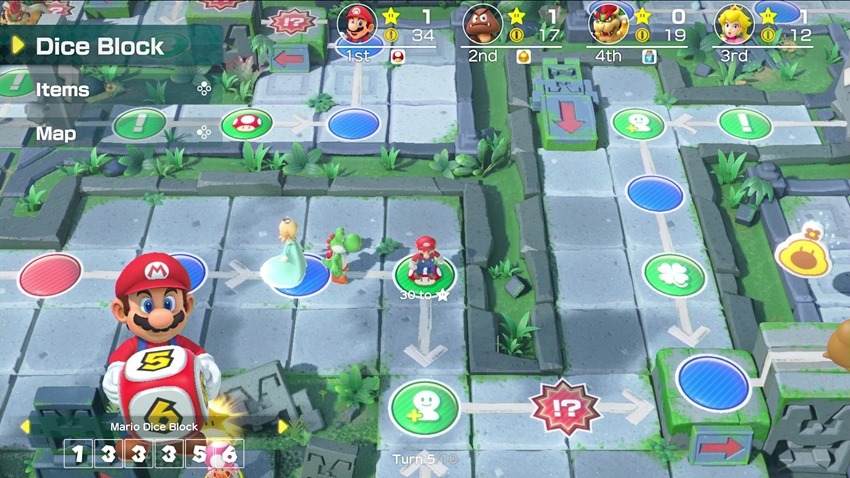 Like any good family oriented board game, Super Mario Party embodies both simple strategies and wild randomness in all of its games. It’s the sort of experience that you don’t aim to be good at, because there’s just too much that happens behind the scenes that can unravel even the greatest runs you have in a few turns. But while that might sound frustrating, it ensures that every game you play – with familiar or new players – feels like you’re playing it for the first time. Coupled with an enormous array of intelligent mini-games and a host of different modes, Super Mario Party is a wildly entertaining and hilarious party game for all types of players.

At the core of Super Mario Party is Mario Party itself – a variety of different boards that give you options to play short (10 turns) or extensively long (20 turns) games with up to three other people. Each board has its own theme to it, which alters the tricks it plays on you while making your way around. One features four distinct fruity themed island with dubiously dangerous bridges between, making a single wrong dice roll turn into a trip back to the start. Another acts as a tower of power, only rewarding players that make it to the summit while giving others many ways to stifle progression with special blocks. 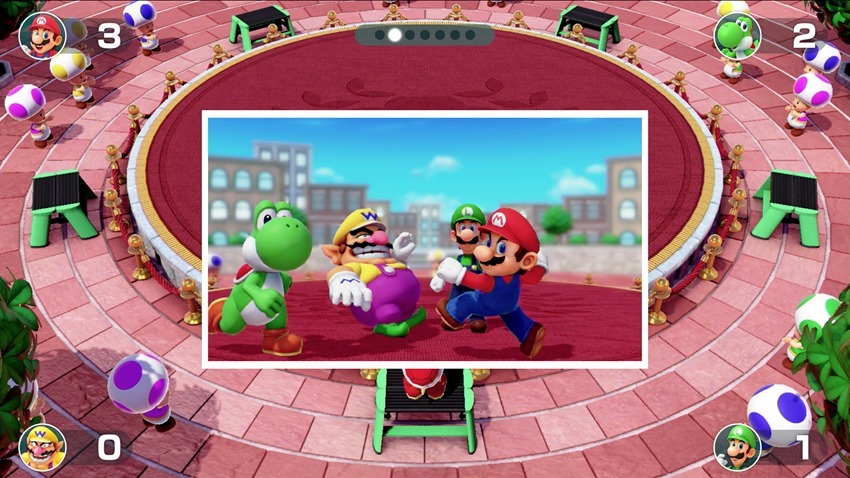 Each player picks a character from the Mario universe, which bestows on you a regular and character-specific die. Rolling either is always a gamble, but characters can have vastly different strategies based on their own abilities. Shy Guy, for example, hosts a die with only a “4” on five faces and a single “0” on one. Wario, conversely, ups the ante with two faces that penalize you with coin reductions but offer large movements up to 10 spaces on another face. Using these different die isn’t a matter a strategy, since the randomness of the rolls always keeps it from being a calculated move, but they do add variety to each game and countless laughs on unfortunate rolls. 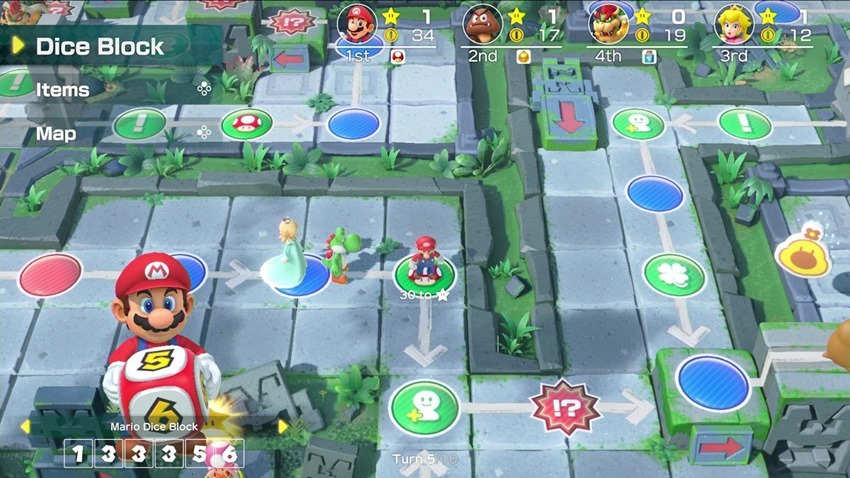 Each Mario Party game tasks players with collecting both coins and stars around the board. Stars are the ultimate goal, and the difference between winning and losing. But you’ll first need to navigate yourself towards the blocks where they’re found, and then make sure that you have enough coins to purchase them. Since some block reward you with coins and others steal them away, simply getting to a star is just half of the problem. Special item blocks give you buffs to rolls and abilities to hamper your opponents’ movement, while ally blocks give you additional characters to use during each turn to maximize your movement. There’s a lot going on at any given time in Mario Party, but the swift pace and easy to grasp flow of each game keeps things manageable even for players not familiar with video games.

Between each turn though, each player engages with a mini-game. These are neat distractions from the core board game, giving winning players more coins for their troubles. Each of the games is designed specifically for a certain number of players, making each encounter either a free-for-all, a balanced 2v2 bout or a wildly entertaining 3v1 fight. The design of each game means that they never last linger than 30 seconds, while also making good use of each of the Switch’s different hardware features. The use of motion controls in prevalent in many, while others will combine analogue stick movement with single button presses for furious melee bouts or Overcooked-like kitchen challenges that never feel familiar from one to the next. 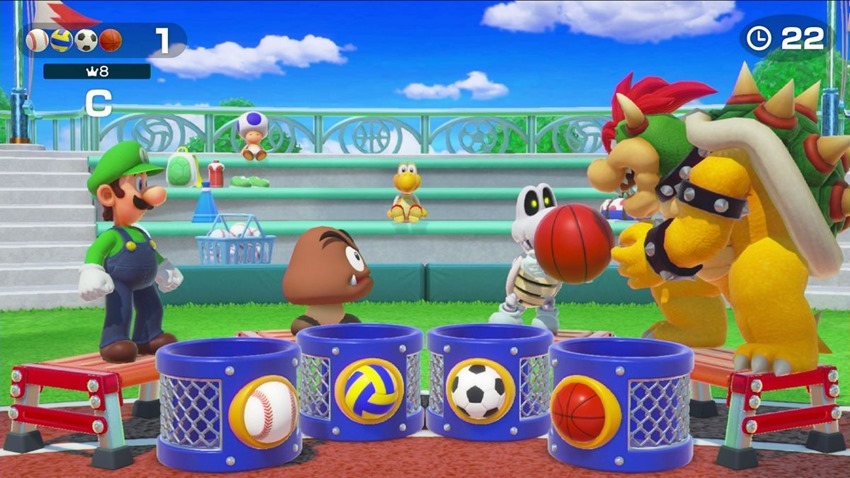 There are some exceptions to that rule though. A handful of mini-games are a chore to play, requiring strange gyro movements that don’t accurately relate to how you’re progressing in the game. One such mini-game was a simple tricycle race, where I was moving the Joy-Con in a similar fashion to pedalling a bike. This movement never felt precise or responsive, despite causing hilarity in the living room as each player struggled to grapple with the controls. It paled in comparison to another game where I used the vertically held Joy-Con to flip a cube of steak, attempting to sizzle each side perfectly before each other player. Super Mario Party’s games are mostly great fun, and each come up with intelligent ways to use gyro controls, the HD Rumble (which hasn’t bee used this well yet) and limited inputs to create compelling distractions to the core board game fun.

These mini-games permeate the other modes that Super Mario Party features too, each of which aren’t as detailed and time-consuming as Mario Party. One alternative mode puts you in a rally of musically-focused mini-games, each of which feature some exciting music from the Mario franchise with good remixes and twists. They use motion control and musical timing in their make-up for quickfire rounds of mini-games, each of which can be picked up quickly and easily after a short introduction. The motion control here really shines, and the responsiveness to each of the game’s short musical windows is admirable. It’s also fascinating to see how man different ideas Nintendo has conjured up for the same core idea, with horse races, mystery block jumps and Walugui dance offs all features using the same simple principle, but using different motions to perform rhythmic inputs. 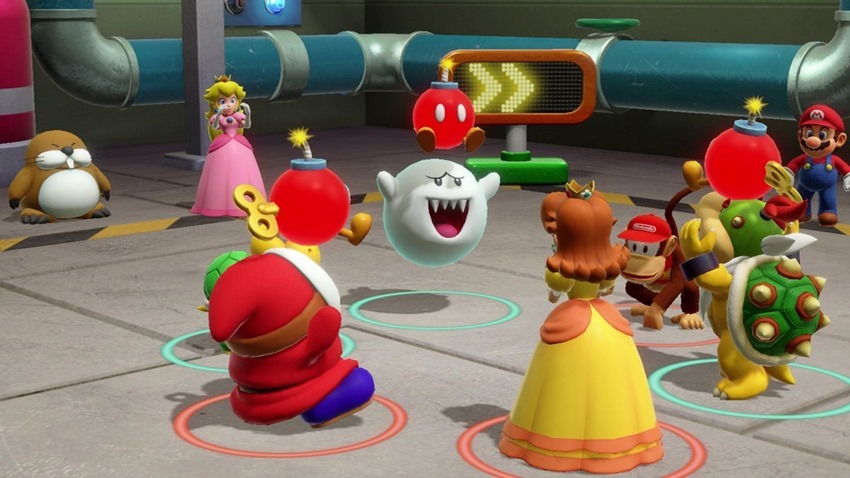 Another mode has you and all other players working co-operatively to make it to the bottom of a ravine, using the Joy-Con to paddle and steer the raft as effectively as possible while racing against the clock. It acts as a pseudo race mode, with branching paths and several boost pads you can hit on your way down. Here hitting balloons shifts the mode into mini-games, where you’ll all work together to try and win more time to add to your clock. It’s not as engrossing as the previous two modes, but the flexibility and unreliability of simply paddling makes it an entertaining excuse to try nonetheless.

Super Mario Party also features some modes that require more than one Switch console. These modes let you play games that span across both screen, which is a technological marvel to witness alone. It means you’ll need to find friends with their own Switch on miss out on it entirely though, which creates a large barrier to entry for some of the game’s most fascinating content. Playing alone is a slight chore too. Given that you can only play Super Mario Party with a split Joy-Con, handheld mode becomes useless. Even if you are just playing against the AI (which is never as fun), you’ll have to find a table to prop up your Switch on if you’re playing on the go, or be forced to ignore your Pro Controller at home. It would be immensely challenging to design each game for the use of all controllers, but it’s still slightly disappointing. 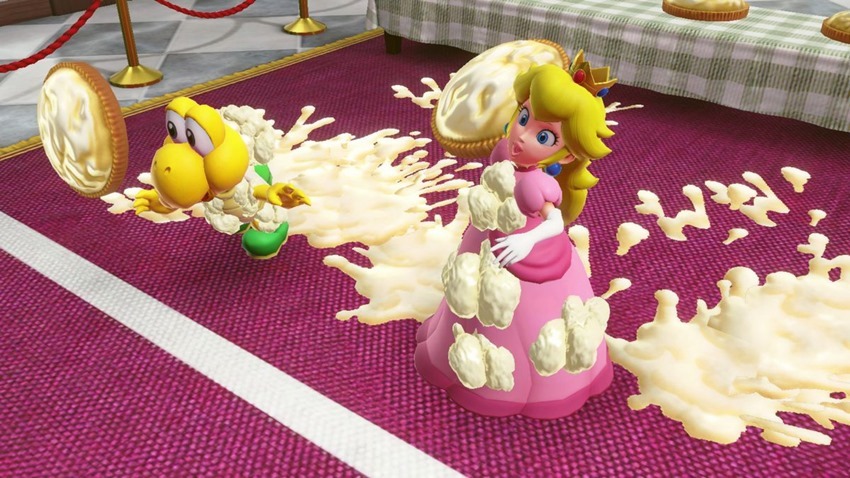 But Super Mario Party shines best when you have others in the room to play with, which has been the case for the series ever since its inception. It retains the high degree of randomness for dynamic play throughs that never end the same way more than once, while also offering a mini-game library so large and varied that you’ll struggle to come across duplicates after hours of play. Super Mario Party is suitable for all ages and all types of players thanks to its easy to learn mechanics and pick up and play design. It’s hilarious and joyful, even when you’re being hammered on by bad rolls and unfortunate board tiles.